Sleeping arrangements can be quite challenging with the arrival of a newborn, particularly if you don’t have a lot of space or you need to make sure an older sibling gets the sleep they need. This is a post I wrote just after Sienna turned 1 year old in August. I have added an update of our situation so you can read about how are we doing at the moment. 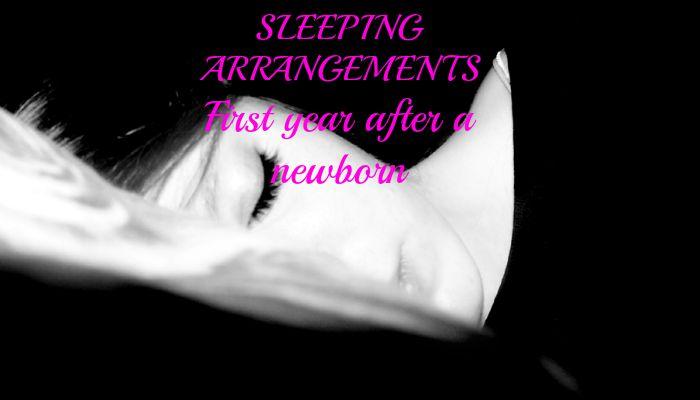 When Sienna was born a year ago we decided that we would put her in a co-sleeper next to me in our bedroom for the first 6 months. My eldest, Bella was sleeping in her bedroom on her own and Nick and I in our bedroom with Sienna. We only have 2 bedrooms so this was important to get sorted by stages so we could have a good sleep….. well at least Nick and Bella could, not so much me due to the night feeds! 😞

Sienna used to breastfeed during the night for the first few months so we decided that it would be better if Nick slept in Bella’s room so he wouldn’t have to wake up during the night while I was breastfeeding Sienna so he wouldn’t be so tired in the morning to prepare Bella’s breakfast, drop her to school and then go to work. Bella’s bed expands out from the side so it can be changed from a single bed to a double bed.

We kept this arrangement until Sienna started to grow out of her co-sleeper and needed to be moved to her cot which was in Bella’s room. At this point it stopped being Bella’s room and was now “The Girls” room. I was always very worried about this move and although at 6 months Sienna was sleeping through the night she was still breastfeeding before bedtime and again very early in the morning as soon as she woke up. The morning feed was the one that was worrying me because sometimes Sienna would wake earlier than 6 am and started to cry for her feed or she would sometimes just cry at any time and I was so worried that she would disturb Bella. I didn’t want Bella to have less sleep because of her sister, especially as she needed energy for her first year at school (Reception).

Considering this, we thought that the best solution would be to delay them sleeping in the same room until Sienna was 1 year old. What did this mean for us? This meant still sleeping in a separate room to my husband for another 6 months! Crazy right? Yes I know but these are the things you have to do in order to get some peace and quiet for as long as you can and to do what feels right for your kids!

Sienna was now sleeping in her cot in the girls room and I moved to that room with her. Bella therefore slept with Daddy in the master bedroom. I know this is not the best solution as it got Bella used to sleeping with Daddy but it was practical for us all at that time. Also Bella had so many changes since her sister was born that we wanted it to be as smooth as possible for her. You can read about these changes here. She wasn’t the only child in the house anymore and  wasn’t getting all the attention from me as before so a little bit of extra bonding with Daddy wasn’t going to be that bad!

A couple of weeks ago Sienna turned 1 year old and it was finally time to get everyone where they were supposed to be! We needed to put the girls together sleeping in their room for the first time! Which finally meant: DADDY AND MUMMY SLEEPING TOGETHER AGAIN IN OUR OWN BED!!! Yes yaay, HAPPY TIMES FOR US!!! LOL

I was so worried about this change which is why I was delaying it as much as I could because I was worried about them waking each other up for whatever reason. Having said that, I thought that if we didn’t give it a try we would never know! It was the night before Sienna’s first birthday so I put them together. I think I didn’t sleep all night thinking about them but you know how mums are, right? We just worry ALL THE TIME! I was particularly worried about the morning feed.

Surprisingly they actually slept well! In the morning Sienna started crying as usual but I went to the bedroom very quickly and grabbed her so that Bella was able to keep sleeping. I brought Sienna to our bedroom and breastfed her there, so we had another 40 minutes where we all had some peace. After this, Sienna was properly awake and of course with this the whole house was awake now too! Lol

This worked pretty well for the first week. Bella would even sometimes come and let me know that Sienna was awake so I could go and pick her up and bring her to our  bedroom to breastfeed her – so really happy times! However, the happiness didn’t last forever as after the first week Bella had a cough which she passed onto Sienna! I had Sienna really ill coughing a lot and of course sleeping together didn’t work at all as it was waking Bella up! I had to swap with Bella again so she moved back to my bed and I went back to the girls room to be next to Sienna! Then when Sienna was a little better Nick got a stomach bug which he passed to us all! This unsettled us all for a couple of days, it was a horrible bug, I really hated it! This is my worst nightmare really!!!! Eeekkkkk

Anyway, after the cold and the tummy bug we had family staying over one after the other one, so for this we left Bella in our room with them and Nick and I were with Sienna, so our sleeping arrangements were all over the place again! 😞

After our guests left we finally decided to come back to our final arrangement and it didn’t work as Bella then came to our room four times!!! Grrrr, what a nightmare!! The following day I tried to tire Bella out as much as possible so she was shattered by the end of the day. We were out all day and brought the girls back to the house half asleep. We managed to put them back in their room and they finally slept there with no issues all night! Sienna woke up near 6 am the next morning. I went to grab her and Bella was still sleeping! She wasn’t disturbed! She then woke up about 40 minutes later justs after Sienna had finished breastfeeding so they were happy and ready to play!

That is pretty much my story about our sleeping arrangements during the first year following the birth of our youngest. As you can see we had ups and downs but hopefully we are finally now in a happy place and fingers crossed things will stay this way!

Our sleeping arrangements are still in the process of reaching our goal of having Bella sleeping all night in the girls bedroom. We can have some days even almost a week when she is happy and stays all night in her bedroom but suddenly we have those days when she just doesn’t want to sleep there and she only wants to sleep with us. Also there were some moments that I woke in the morning and she was back in our room and we didn’t notice. These moments are rare as when she sleeps with us we really notice her presence as she sleeps in a horizontal position!! Exactly, that is the way that she likes to sleep when she is our bed!! WHY?? Can someone answer me that? grr So it is a nightmare for me. I think is worst for me than Nick as he is that type of person that will keep sleeping even though there is fire in the house! LOL He really has that strong sleep. Lucky him because it is normally me who has to deal with all the “night disturbances”!

What we normally do with Bella, is that she has a bedtime story with daddy in our room as Sienna is already sleeping in the girls room. After the story she then falls asleep. She stays in our bed for a couple of hours and then we move her to the girls room. She will stay there until 3 or 4 am in the morning that she just have to come back and sleep with us! This last week, for example she has come to our bedroom every day! Yes I know! I want to cry!! But what can we do? I guess we just need to keep persisting and putting her back to her bedroom until one day she just stay there all night every day and not just for phases!!

So my update is still similar!! Not as great as I thought it would be at this stage. 🙁

Do you feel this story is familiar to you? Did you or do you still have issues with your sleeping arrangements? Of course all depends on the space that you have, the bigger the space the better but having limited space like me can really be a nightmare!