Bella and I had a great mummy and daughter time during the summer as we were invited to spend a family day out at The O2 in London. As soon as I received this invitation I told Bella and she was so excited as we both knew it was going to be a fun adventure for us. 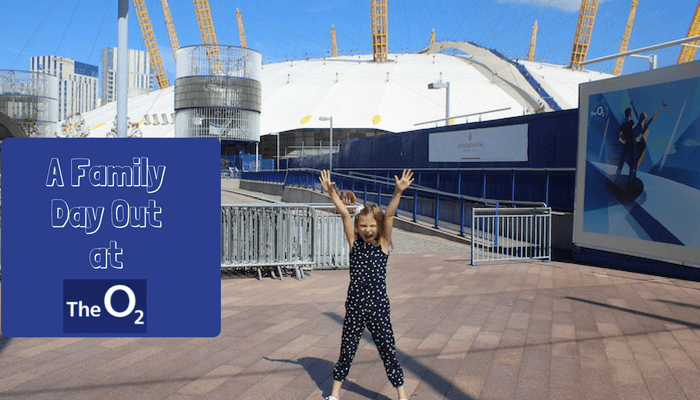 I have been to The O2 before but it was a number of years ago – before I got married and before having my girls. I know it has changed a lot so I was looking forward to going back, and this time was special as I was going with Bella.

For me The O2 was always about going to the Arena and watching a concert or a show, but this is not the only thing they have. The activities are endless so you won’t get bored. You can do bowling, you can climb up at the top of The O2, there are lots of different restaurants to choose from, a Cineworld cinema, Building Six (night club), Nissan Innovation Station, Sky Studios and Indigo at The O2.

Everything for the day was planned for us. It was going to be full of entertainment and they wanted to show us all the activities that they had in place for the kids during the summer. The idea was to arrive in style via the MBNA Thames Clipper boat.

You can see our video below: 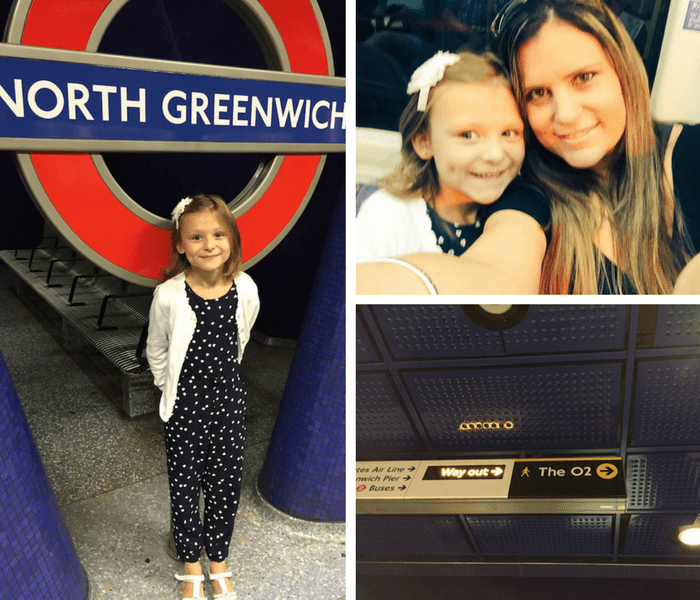 We were running a little bit late that morning to take the boat so we decided to go straight  to The O2 via the Tube so we were able to arrive on time. It was a fairly easy journey. We arrived to North Greenwich Tube Station which is on the Jubilee Line. We took the Thames Clipper on our way back instead so we didn’t miss the experience. 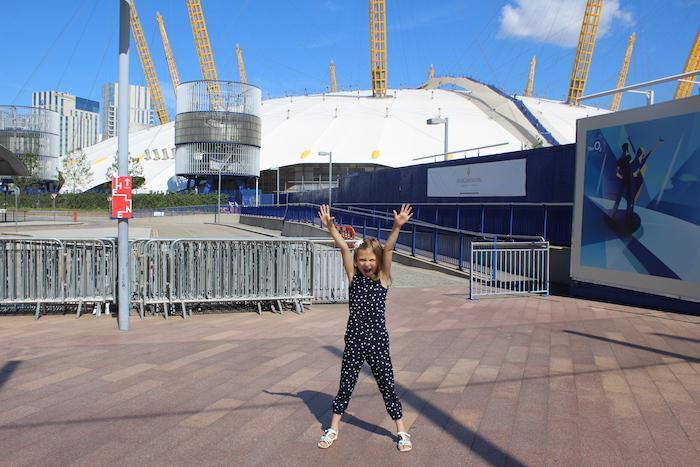 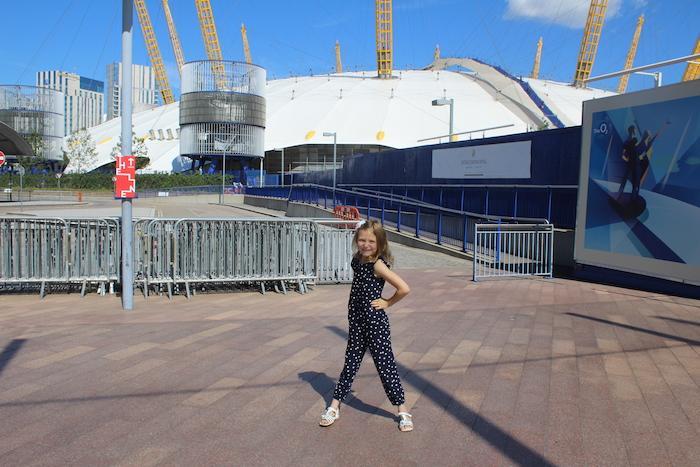 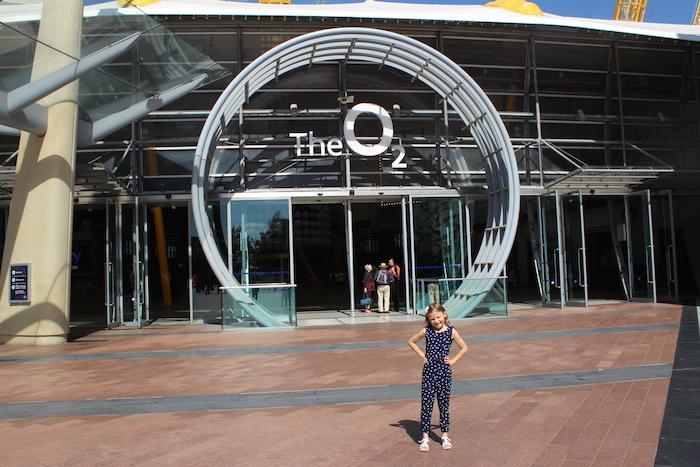 When we arrived Bella was very excited about the venue. It is very big and very inviting. I took a few photos of Bella outside of The O2 first. She was so keen to pose for me that I thought I should get advantage as she is not always in the mood for taking photos. 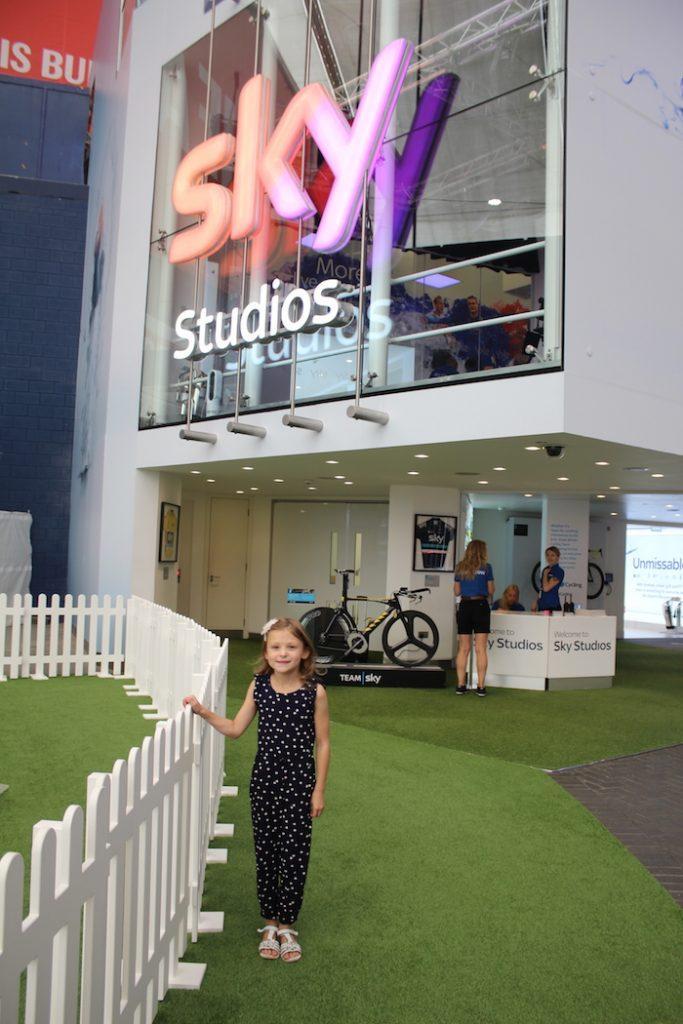 As soon as we went inside we saw the big sign that is on the Sky Studios building. They were waiting for us already so we were greeted straight away. Outside the Sky Studios they had a mini golf adventure featuring all the famous golf tournaments around the world. Bella was desperate to do this first but I said that we could come back to it after we had been inside to the Sky Studios. 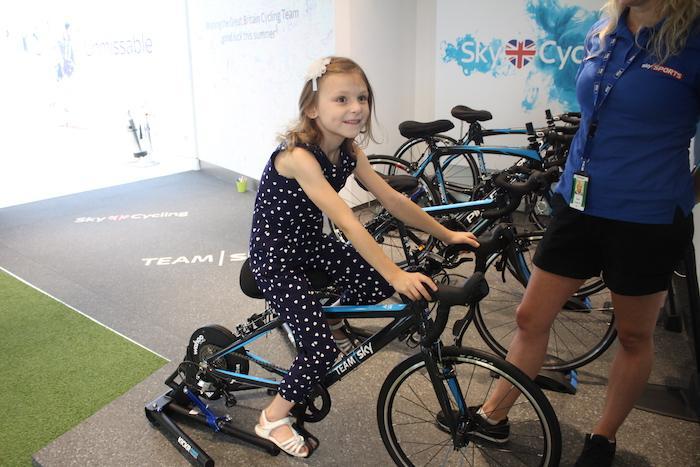 The Sky Studios had 3 floors. The Ground Floor was all about cycling. There were a few bikes you could jump on and try to ride it as fast as possible so you could then check your timing to see how fast you were. Bella tried it but very gently as she was still not long out of hospital from the asthma attack she had, so I didn’t want her to do it too fast. 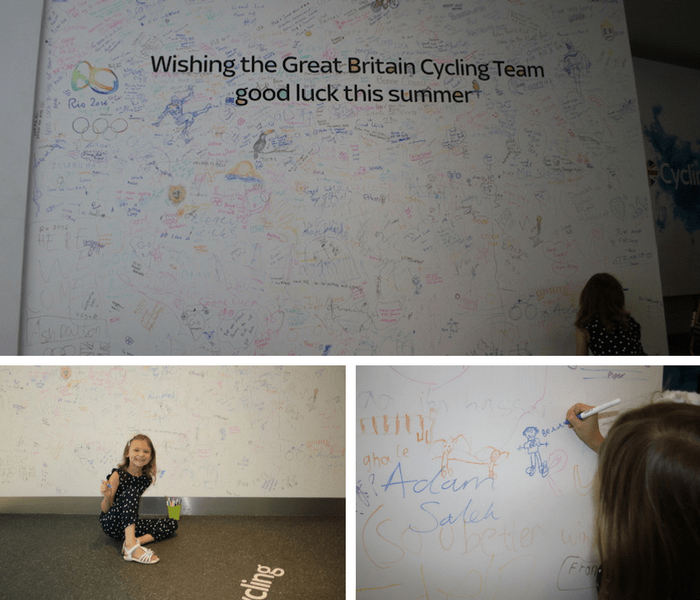 They also have one of British Tour de France winner, Chris Froome’s bikes on exhibition. It was very cool to see it and touch it. They also had a big white wall where we were able to leave a message wishing luck to the GB Cycling Team. Bella loved this idea so she was very excited to leave a message for them. 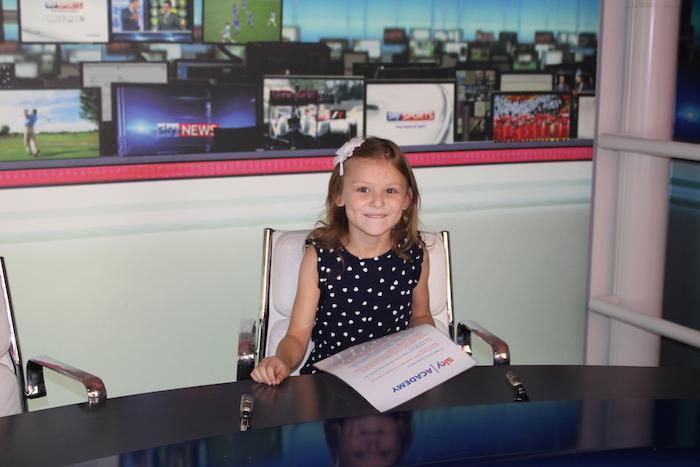 We then went to the next floor up and there was the Sky News section. Yay. We were really looking forward to giving this a try. Bella and I sat down and read the news. It was so much fun. The idea of this is to go behind the scenes, read the news and see how TV is made. They also recorded our “moment in the spotlight” LOL! 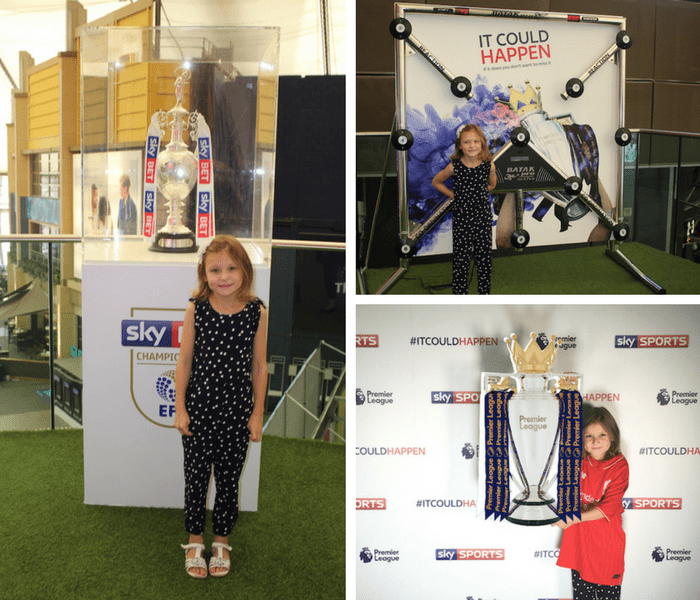 Then we went to the top floor. They had a whole floor dedicated to football with various games and interactive displays to play. They had a trophe on display that Bella liked. You can join the line up of a football team or even having a photo carrying the trophe. Bella was not  so keen to do it all as she said was that she was not in to football. That surprised me as last year she was enjoying playing football with her friends during the school breaks but well, you know how kids are, they change their minds all the time, LOL! 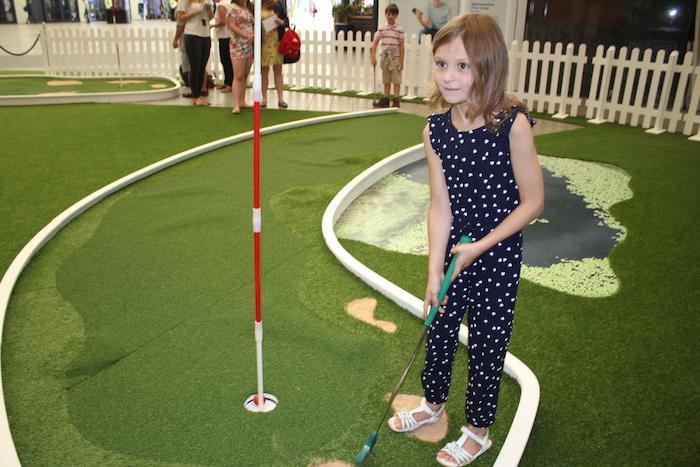 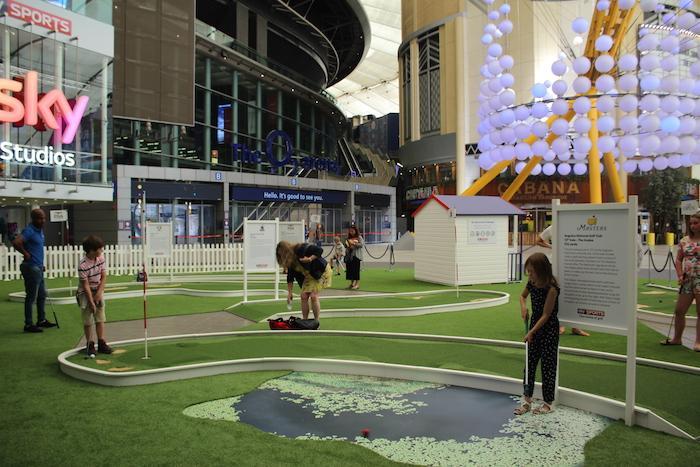 After this we went to the mini golf area. Bella was very happy as she really wanted to play here. We did the whole round and she loved it. 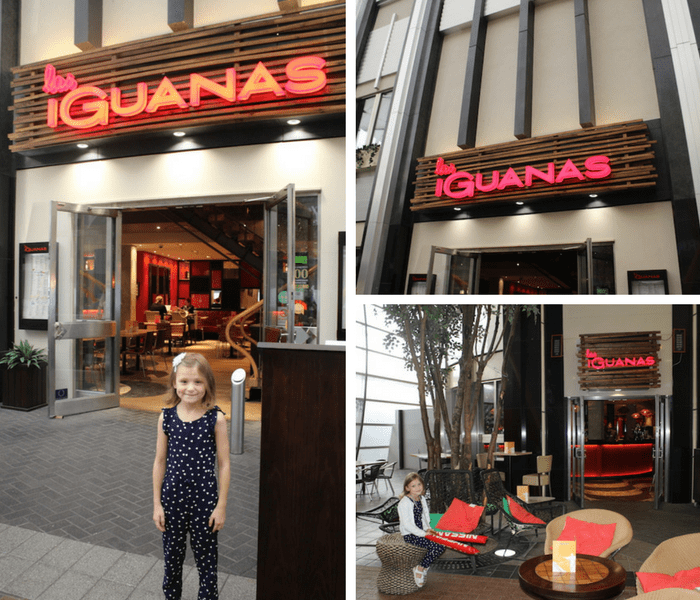 We then went to have some lunch at Las Iguanas. It is a Brazilian restaurant. I was very happy to have lunch there as it brought me back to South America. It was lovely. They also had some Peruvian ceviche which I thought was fantastic. 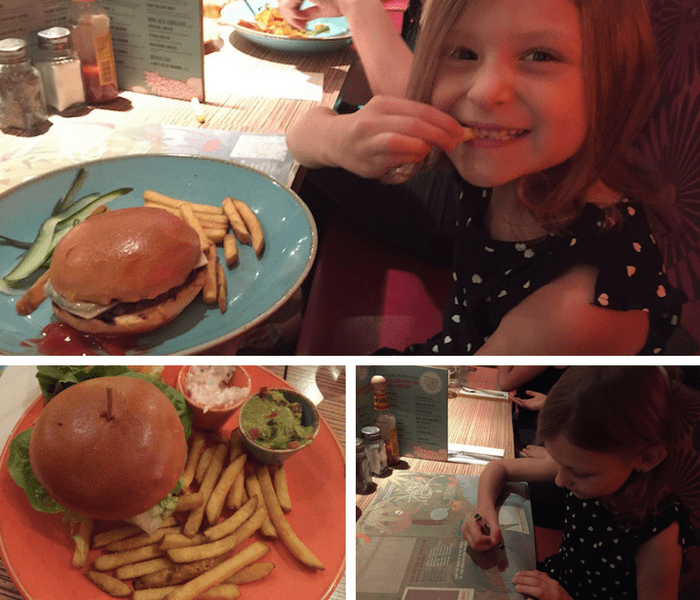 Bella and I ordered some tasty burgers. We really enjoyed our meal  there. They have fresh superfood salads, tacos, or hearty Brazilian curries, Blazing Bird, juicy spiced chicken or fajitas all made fresh to order. They also have a huge selection of cocktails. They open Sunday to Thursday from midday until 11 pm and Friday & Saturday from midday to midnight. 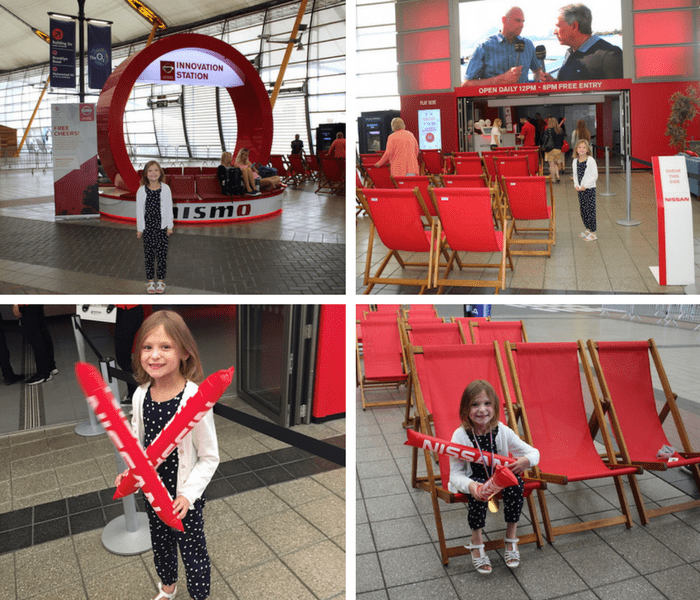 When we had finish eating we were booked to go to the Nissan Innovation Station. This was a different activity to do, so we were very curious about it. You were also able to watch the Olympics live on a big screen from the outside. 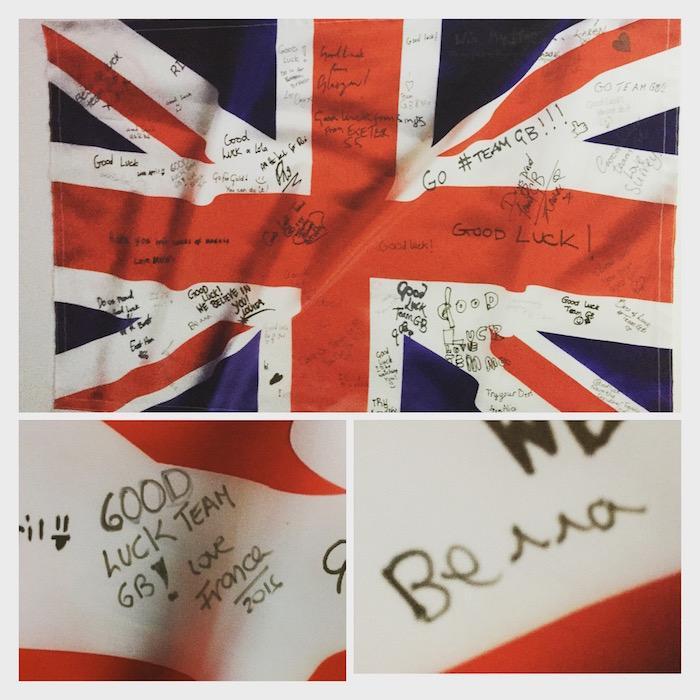 There were different things to do inside. They had a flag where we were all able to leave a good luck message to the Team GB Olympic and Paralympic Teams which was going to be sent to the athletes in Rio. How cool is that? We of course had to leave a message. 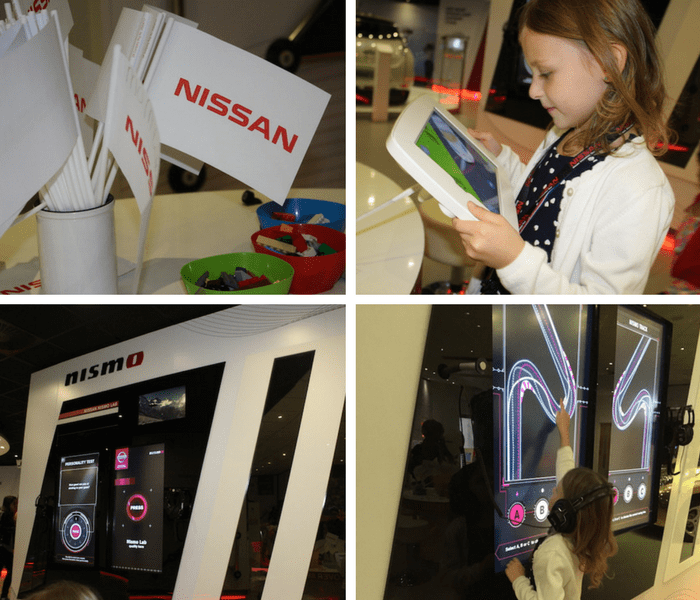 You can challenge your family to a race on their custom built Nissan track and Gran Turismo 6 pods. They had competitions and activities to fuel our little ones excitement for the day. They also had a state-of-the-art wheelchair racing competition for a chance to win Nissan merchandise. We didn’t try as it looked a bit hard to do. 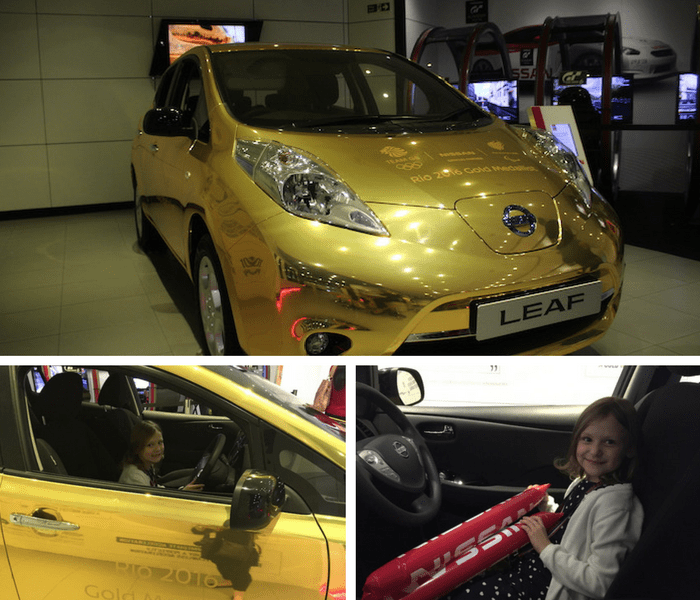 They are still inviting along people until the 18th September to cheer on the Paralympic athletes at their purpose built Cheerzone. They have a giant screen where they are passing all the action from the Rio 2016 Paralympics. They have deckchairs you can relax in too. They will also be giving away free ice-lollies and chocolate medals every time Paralympics GB wins a gold medal. Yay!

This is a free experience which is open daily 12pm-8pm. Cheerzone opens every weekend until the 18th September from 12pm to 8pm. 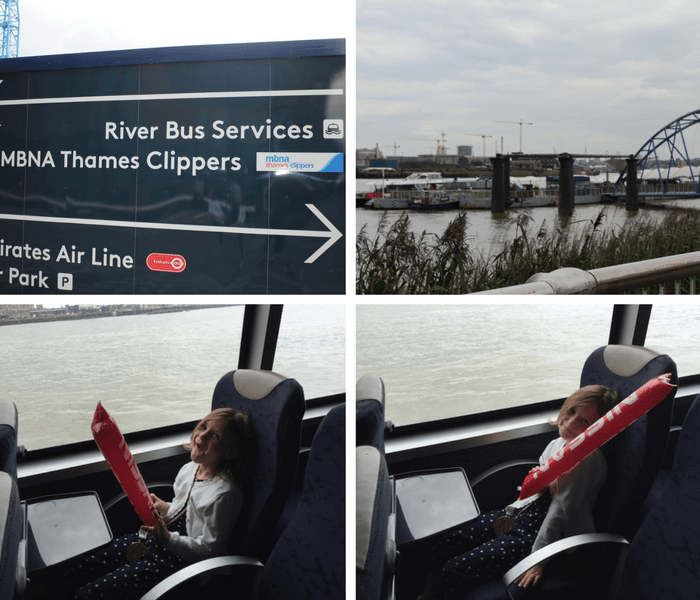 Bella and I went for a little walk around The O2 after we had finished the main activities. Then we head towards the MBNA Thames Clippers to go back home. The River Roamer tickets allow you to board an MBNA Thames Clipper at any pier and you can hop on and off all day. Boats go direct from London Eye pier to The O2. They leave every 30 minutes and begin three hours before an event. It takes 35 minutes so there was time to grab a drink and a snack on board. 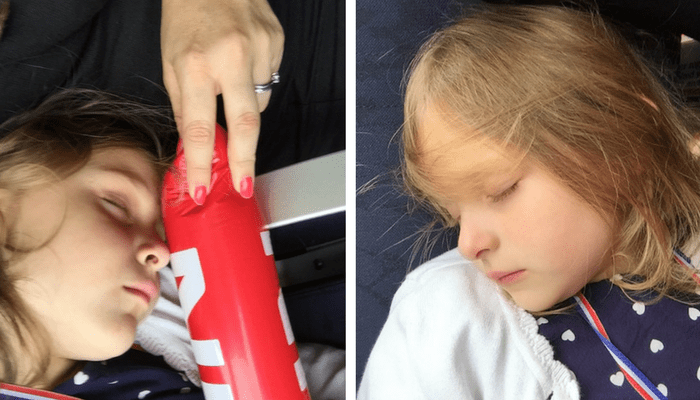 Unfortunately Bella was so tired that she fell asleep on the boat. She did enjoy the first 10 minutes though. I had to wake her up so we could leave and take the tube so we could go back home!

I really enjoyed spending some time with my daughter. It was really nice. We did so many things that day. The O2 is definitely a place that I recommend you to go with your kids. They will love it! You can find more about them on Twitter, Facebook or Instagram.

Have you been to The O2 before? Have you heard of all the activities that they are having during the summer and also during the whole year? What do you like most from the things that we did that day? Is there anything in particular that caught your attention? Please leave a message below as I would love to read what you think.

*Disclosure: I was invited to spend a family day out at The O2 with my daughter Bella in exchange for a blog post. However all thoughts and opinions are my own.