During the summer we were contacted by Virgin Trains East Coast to review their First Class service to one of the destinations on the East Coast line, such as Edinburgh, Glasgow, Newcastle, York, Leeds, Aberdeen, Durham and Lincoln among others. We chose Durham as we have never been there before and it sounded like an interesting place to visit following a bit of research online. 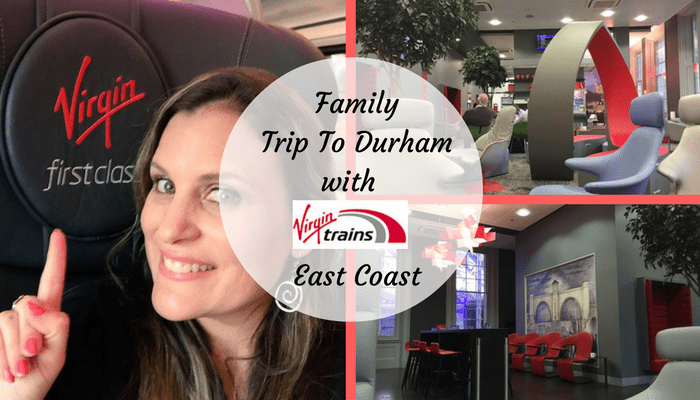 We were asked to go as a family, which was great, making it a really nice to end to the summer holidays. A week ahead of the trip we received our First Class tickets! Yay! How amazing is that? We have never travelled First Class with Virgin Trains before so it was going to be an exciting new experience for sure!

We actually received 3 tickets because up to two children under the age of 5 can travel free of charge, which meant we didn’t need a ticket for Sienna. This also means that kids under 5 don’t need a ticket so they’ll be expected to sit on your lap if the train gets busy. In our case, we were very lucky as we managed to find 4 available seats. If you can, you should reserve your seat, especially if you are travelling at a busy time.

On the day of our trip, which was a Friday, we set off for London Kings Cross in the afternoon.  We planned to get the 4:30 pm train which meant we arrived with plenty of time and we could also experience and enjoy the Virgin Trains First Class Lounge.

The Virgin Trains First Class Lounge is so beautiful that I wanted to stay forever, LOL! I loved the colourful, modern decoration. It was very stylish and well equipped with technology (for charging mobiles and sockets for laptops, etc) as well as complimentary wifi. 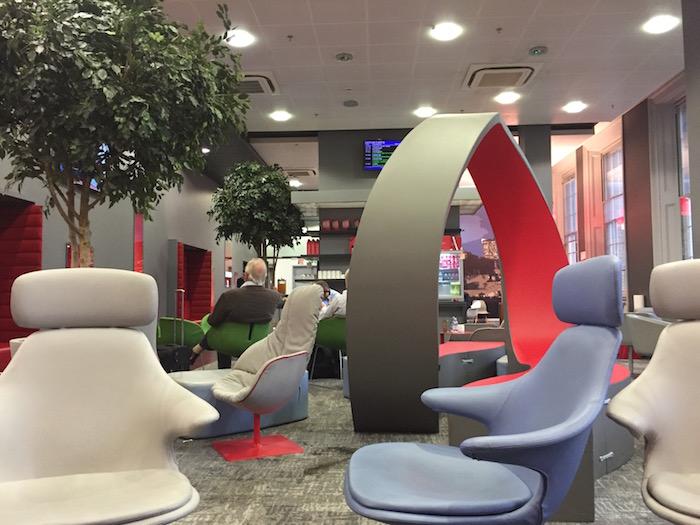 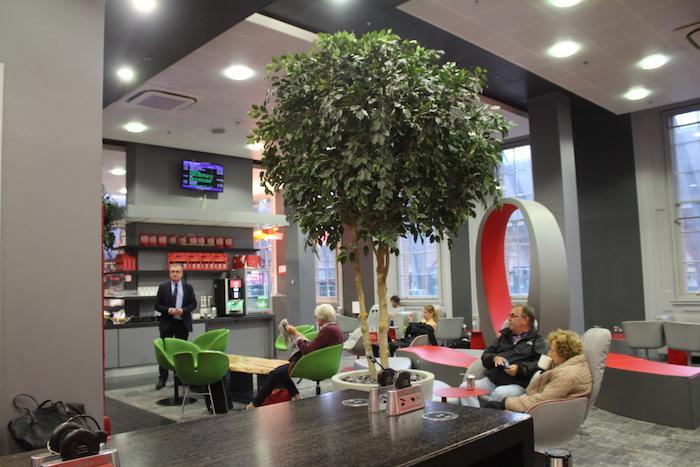 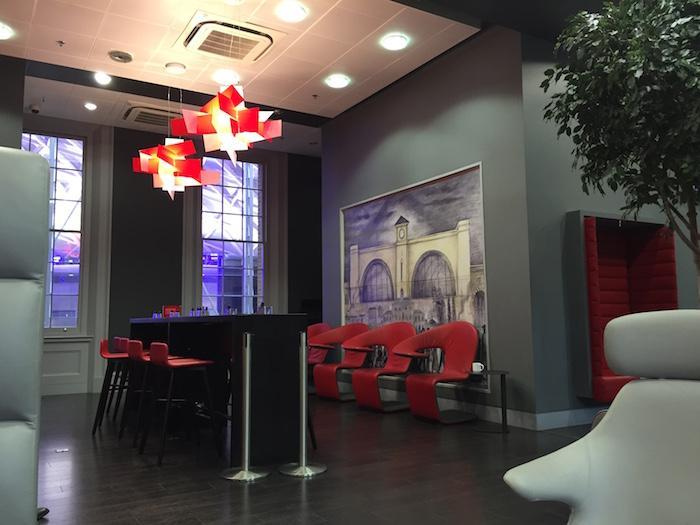 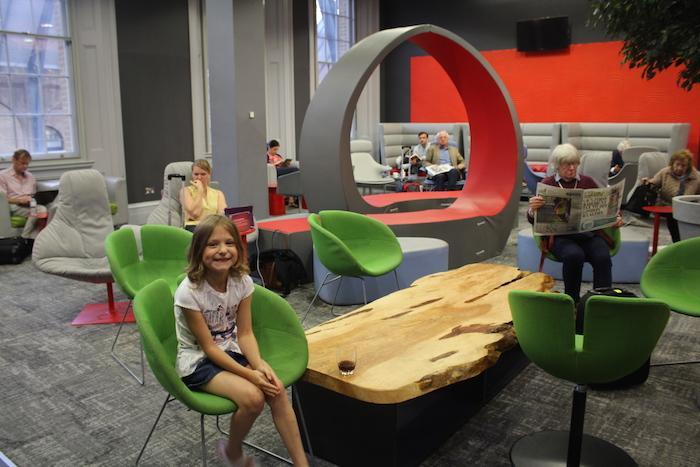 They also have brand new relaxation areas, brand new workspaces and even brand new chaise longues. The lounge attendant was very welcoming and helpful too. They had soft drinks, snacks, and newspapers to read. Of course, reading a newspaper in relaxation with two excited little girls around was never going to be a possibility, LOL!

There were some flat TV screens around displaying news and also you were able to hear live the train timings which is great so you then don’t miss your train. 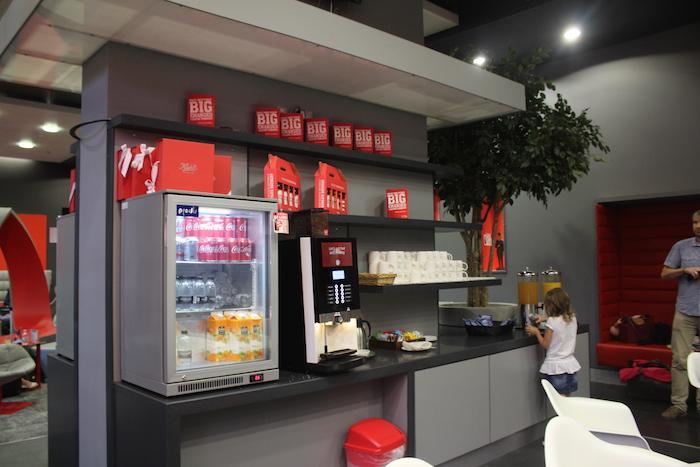 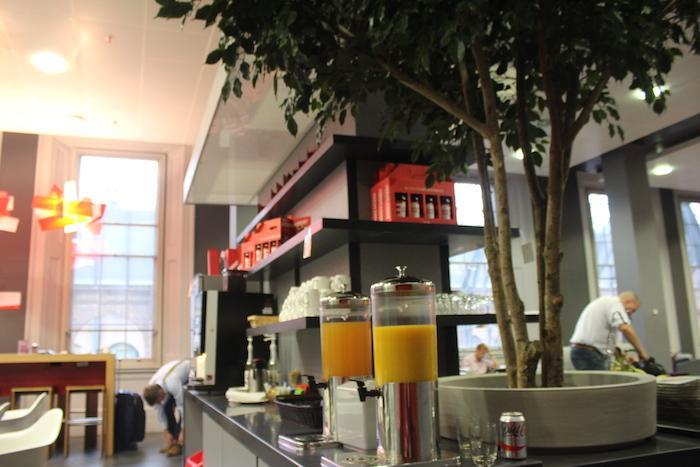 The girls enjoyed some orange juice, crisps, and some delicious chocolate chip shortbread. They were so yummy they ate 2 packs each! There was also fresh fruit such as apples and bananas available. Nick and I went straight to the coffee machine – we really needed one, LOL! 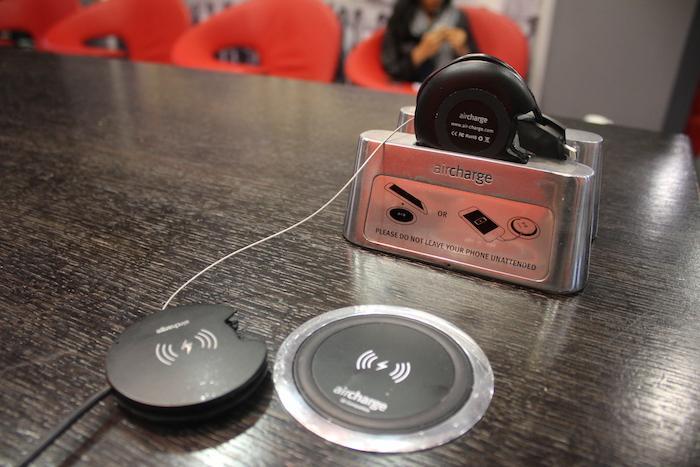 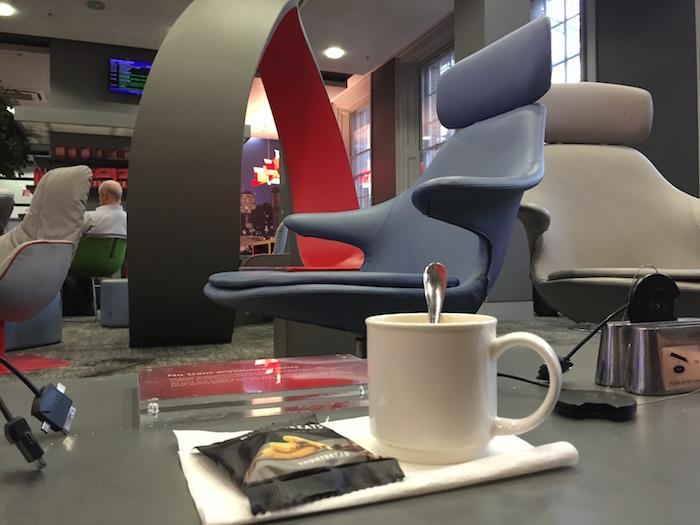 I noticed that Virgin have changed their lounge access rules at Kings Cross Station, so all First Advance ticket holders can now go in for free as long as their ticket costs over £10. I thought that was worth making a note of.

Nick thought the girls might like to visit Platform 9 3/4, as featured in the Harry Potter books and films, so he took them to see that while I relaxed for a bit. He ended up buying some slug sweets in the Platform 9 3/4 shop, which Bella was eager to check out – it was quite a site seeing half a yellow slug sticking out of Sienna’s mouth! When they came back, it was time to to get our train – you can exit directly to the platforms from the lounge which is very handy, especially when you are travelling with kids and you don’t need to rush through a crowd of people.

There were lifts and escalators everywhere which I thought was really good for disabled accessibility, people travelling with a lot of luggage or kids (or both!). It was all very well signed too. I was a little bit worried about the 3 hour journey with 2 very active girls on the train to Durham. I must admit, I was dreading it already, LOL! 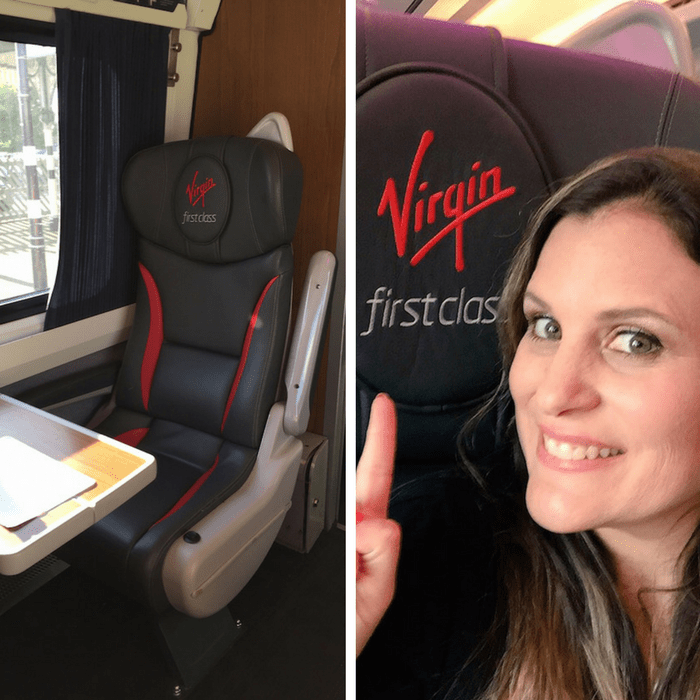 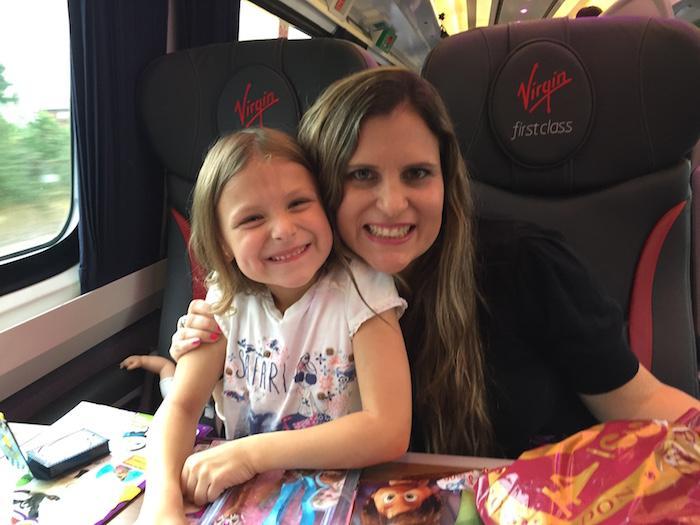 We found the first class carriages pretty quickly and managed to get our 4 seats pretty quickly too. Our 4 seats faced each other with a table which was the main thing we wanted. I’m not sure if the whole train was new but definitely our carriage looked pretty new – it looked very posh. They have big and comfy leather seats with the Virgin Trains logo and First Class emblazoned across them. It looked really nice, so of course, I had to take selfie in my seat! 😉 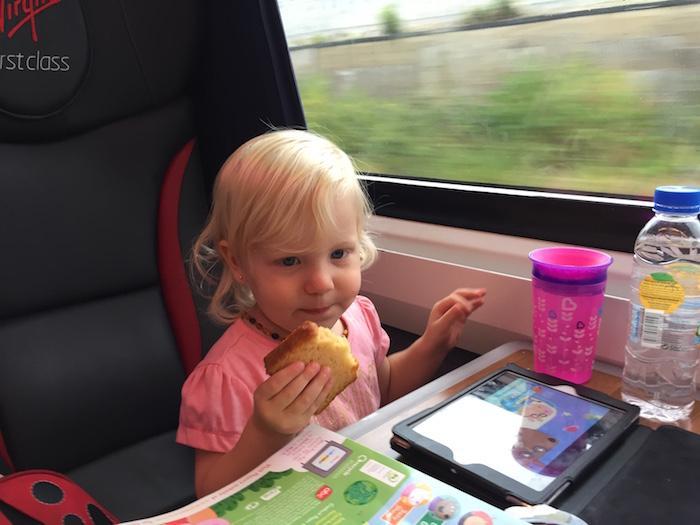 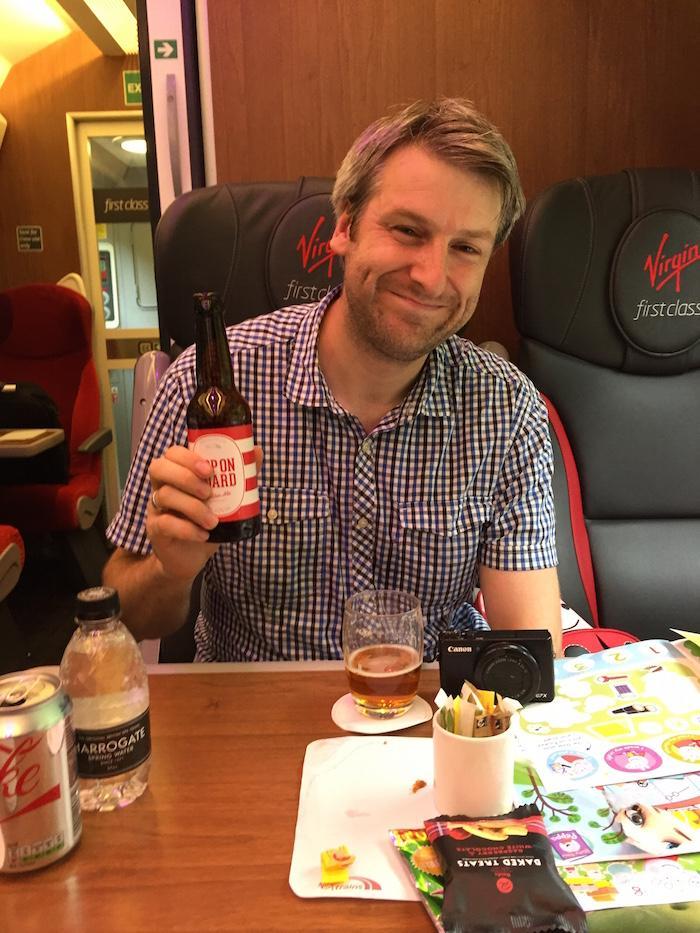 Not long after, we were offered some drinks, crisps, and cakes. Obviously, my girls were delighted that there was some cake! They had one piece each with some milk. Everything on offer is included except for prosecco which is charged at £6 for a small bottle. 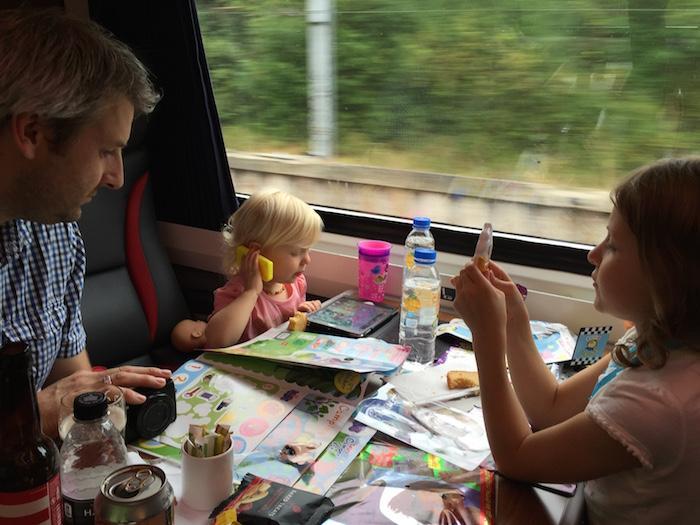 As I mentioned before, we were very worried about the the girls getting bored during our 3 hour journey. We bought lots of children’s magazines which have plenty of puzzles, games and stickers inside and usually come with a few toys and surprises too. I think Nick bought all the magazines in the store – they had about four each! This was great as they were very happy opening and discovering the surprises for at least an hour. We also brought their iPads which entertained them for a little while watching videos. There was a handy socket underneath the table too for charging them which was useful to be able to use.

I was very happy to have wifi on the train so I could use my laptop, although I was so tired that I couldn’t do anything. I decided to relax and enjoy the trip instead. 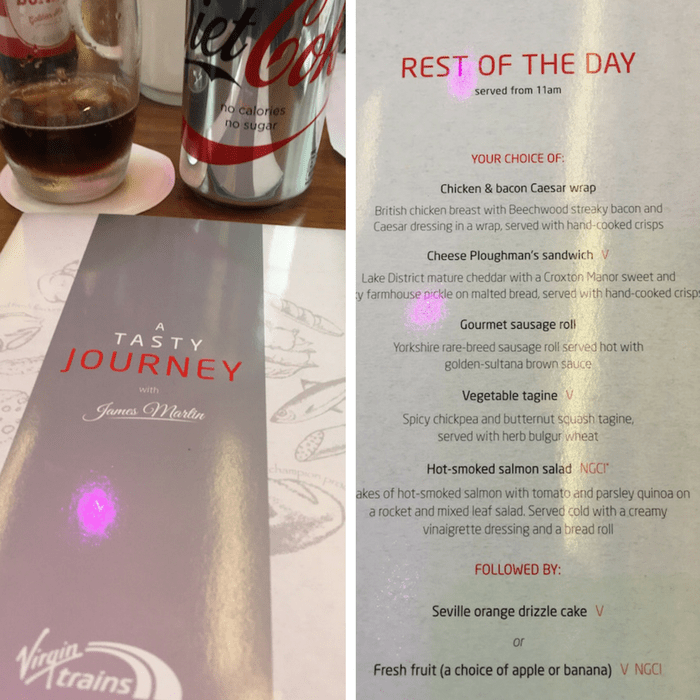 We then were offered the menu. This is a whole new menu that has been created by James Martin. There is a breakfast menu that is available until 11 am, and then a ‘Rest of The Day’ menu that is served from 11 am onwards. They also had a Dinner Menu and a Weekend Menu that we were not given because we were travelling on a Friday afternoon. 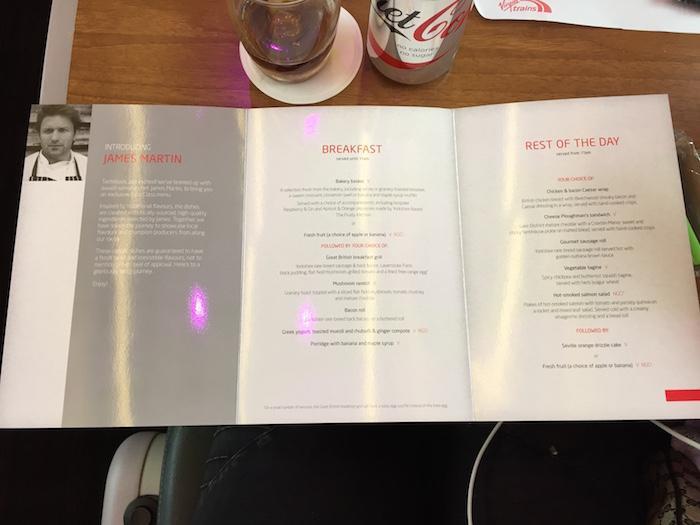 The Rest of The Day Menu had: 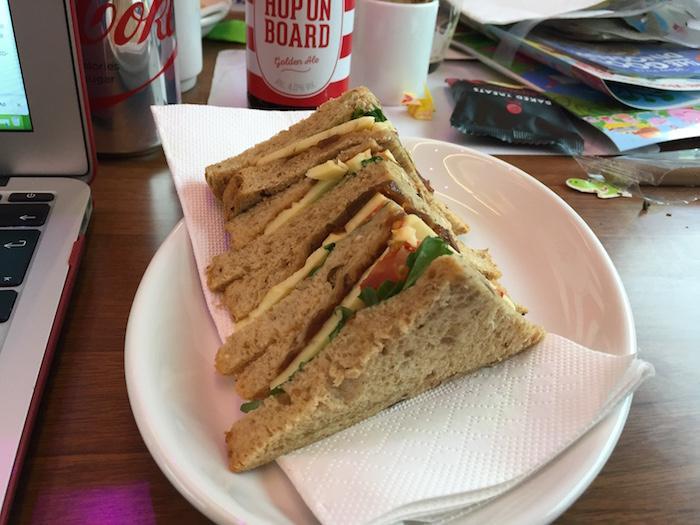 For pudding you can have a Seville Orange Drizzle cake or choose from a selection of fresh fruit. If you would like to check the menu you can see it HERE. Nick and I both ordered a Cheese Ploughman’s sandwich and the girls had wraps. It was all really nice. 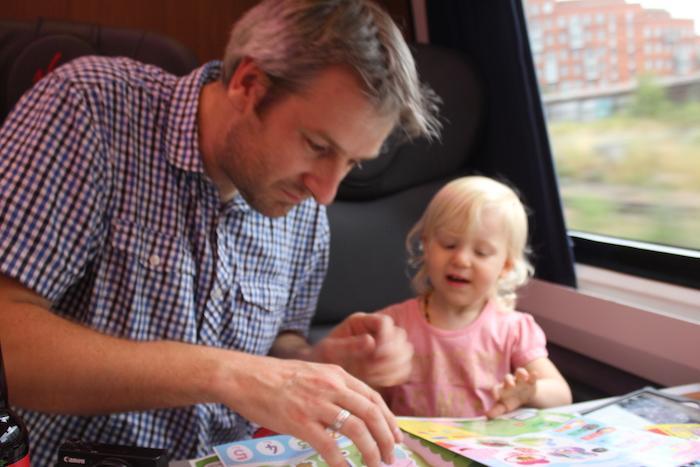 After we had eaten, there was still 45 minutes of the journey to Durham left. This was the tricky part as my girls were started to get bored with the same entertainment. Nick decided to walk down the carriages of the train with them, which killed about 20 more minutes! Thankfully there were not many people on our carriage as I was worried some people would start complaining about my girls, LOL!

With about 25 minutes to go, Bella decided to play with Sienna in the carriage. There were only a few people remaining so I allowed them to play in our carriage only. After just 5 minutes, a woman came carrying Sienna because she had got her arm caught in the sliding carriage door. What happened was that the automatic doors between carriages open when you stand in front of them so then you can cross. In my opinion, it would be better if you had to use a button to open them as it can be dangerous for kids. This would not have happened if the doors were not automatic. I think this is something to bear in mind when you have kids on trains that have doors like that.

Anyway, my poor Sienna was crying but the staff were very helpful and they brought some ice packs to put on her arm. She was fine and it wasn’t that bad but it could have been worse. She stopped crying after just a few minutes. She is very brave and relaxed with accidents which I appreciate as my eldest daughter tends to be the opposite!

After all the drama we realised we had arrived in Durham, so yes we managed! We travelled 3 hours by train with the girls and we survived, LOL!

**Quick Note: Our weekend away in Durham. Will be live soon!

Our journey back was the same although the train wasn’t as new as the one we took on the way but the service was still the same. 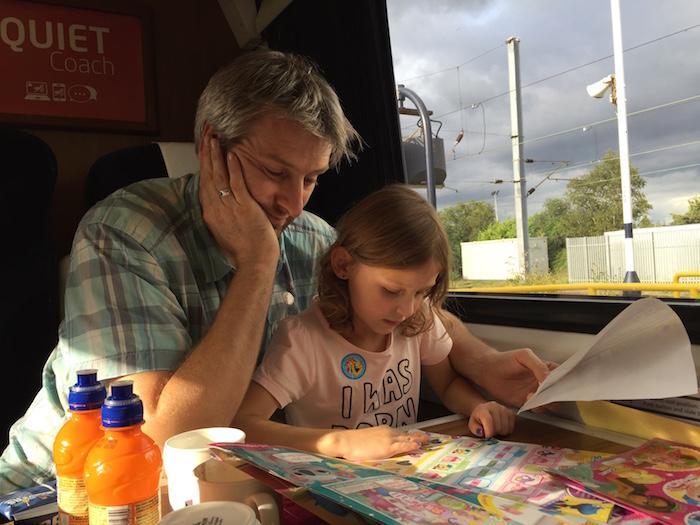 We did the exact same thing as our outbound journey, giving some magazines to the girls, having some iPad time and also enjoying a few snacks. We also had a walk around the train again too. We were all very tired from a busy weekend though and this was the main difference I would say, so we were really desperate to arrive home. 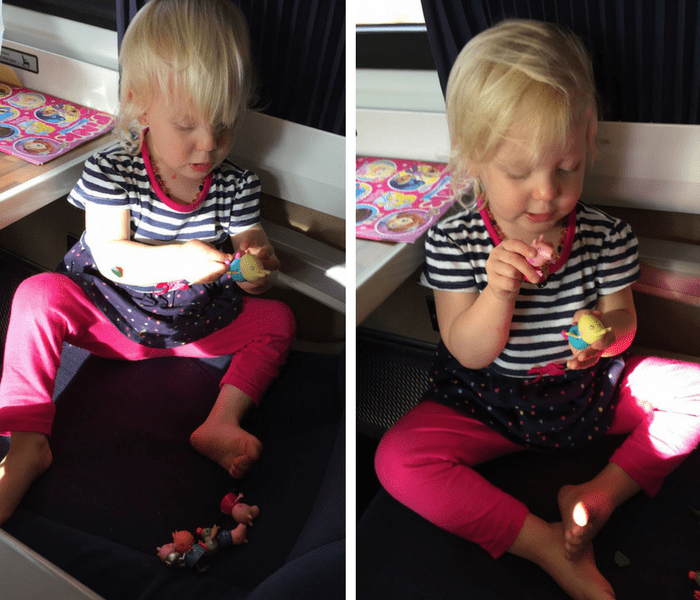 I would say that it is always a challenge to travel with kids but it is, of course, possible. If you have the opportunity to travel in First Class the journey becomes much easier journey.  I wouldn’t say it is ‘a journey to heaven’, as it never tends to be when travelling with kids, LOL!

Next: Our weekend away in Durham. Will be live soon!

*Disclaimer: We were guests of Virgin Trains East Coast for our trip to Durham. However, all thoughts, views, and words are my own.

✨Our Accommodation at Unity Farm in Brean✨. We