This week has been one of the scariest ones for me. I have been unwell and I have never felt like this before. I got some symptoms and straight away I asked myself if this could be COVID-19. 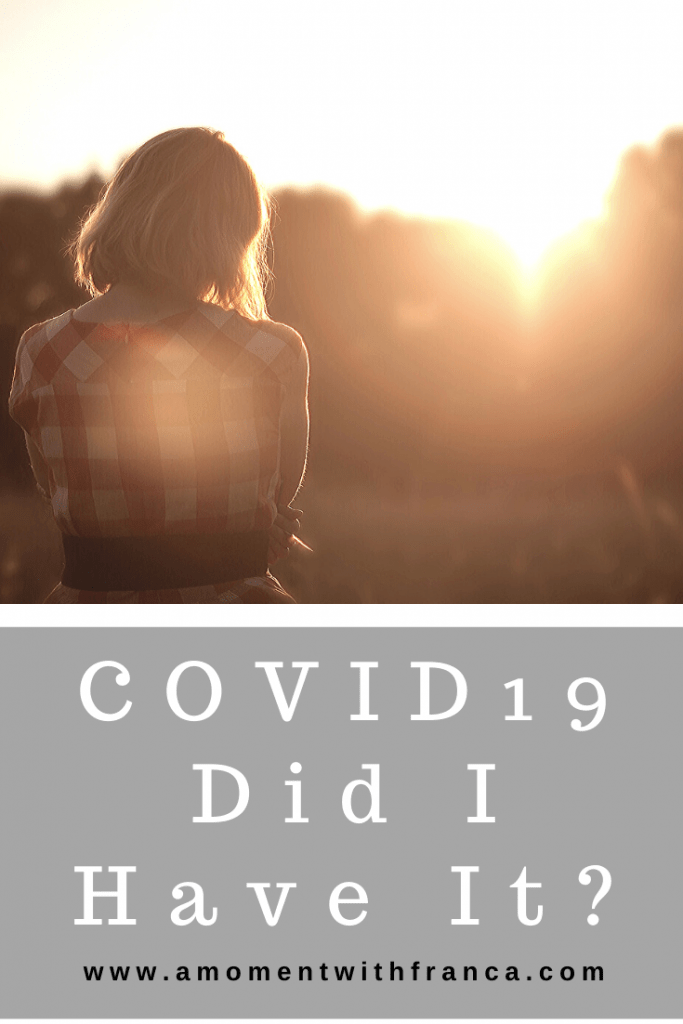 Everything started last Sunday. I was feeling a little bit under the weather but I thought I was just tired and perhaps was getting a cold. I didn’t pay much attention to it.

During the night, I suddenly woke up at 4 am feeling a little bit breathless. I had a blocked nose so I thought that was causing the problem. So I smelled some Olbas Oil which helped me. It took me a little while to go back to sleep but I managed.

The next day (Monday) I felt weird. I was not myself. I had a headache and I felt warm and had some chills. I took my temperature which was around 37.5C so I tried not to worry much. But I was having problems breathing. I thought the blocked nose was the issue so I tried to smell more Olbas Oil. This calmed me which was nice but I felt very tired. The weather was warm and sunny so I decided to lay down next to the balcony (Juliet balcony) to feel the sun. I was desperate for some proper sun on my face. I thought some vitamin D would be good for me. It helped.

I felt my nose very congested and blocked. I thought this was causing my breathing problems so tried to moisturise my nose with some water to feel less dry. Suddenly I was feeling my heart was beating faster and faster and my breathing was getting worse. The feeling was increasing so fast that I was unable to stop it. I got so scared and nervous and I immediately thought: What if I have this virus?

I felt so breathless. Nick said that it seemed like I was having a panic attack and I believed him. I haven’t had this before but I felt I was making myself feel worse so I tried to relax but nothing worked. Nick suggested to do a bowl with hot water and breathe it to see if that helped to clear my nasal passage. I put a drop of Olbas Oil in too. I did this for a few minutes and I had calm audio in the background to relax me as I was very anxious.

This feeling went away and I managed to relax. But it was never for too long. The breathless feeling was on and off all the time. It was very uncomfortable. I wanted to sleep but I couldn’t. Every time my eyes dropped, I woke up straight away feeling out of breath again. It was awful. I didn’t understand why this was not going away.

This was the same for 3 days. My headache was on and off as well as my fever but by Wednesday it went up to 38.2 C. I only wanted to be in bed. I felt very weak and I lost my appetite. But I tried my best to keep drinking a lot of water.

I couldn’t sleep for 3 nights but by the 4th night, I was finally able to sleep. My nose was better and my breathing was better. This for me was a massive improvement and I was feeling things would be better. By this day, my fever was also gone. Everything was much better but then something happened. My chest was starting to feel very tight and a mild cough started.

I was breathless again but this time the feeling was coming from my chest. It was very uncomfortable again. It wasn’t constant but it happened a few times that day. I was worried that I was going to have a bad night sleep again but thankfully I managed to sleep well.

It was the same on Friday but I was starting to feel better. I still had fatigue but it wasn’t as bad as the other days. I went the whole day without having the breathless feeling. My chest was a little bit tight still but was fine.

Today, day 6, was the first day that I have felt fine. All those symptoms were gone including the fatigue. Now the question is, was this a mild version of COVID-19 or was it a normal flu? The answer is that I may never know unless I get tested which who knows when will this happen. I really think the tests should be accessible to all. It would make a huge difference.

I have never felt so grateful to be able to breathe. I can’t tell you all the things that went through my head this week. I was so frightened all the time. I didn’t want to end up in hospital. The idea of this scared me. The problem with this virus is that you are dealing not only with the physical but the psychological effects of it too.

If I caught this virus, I am not sure how this could have happened as we have been in isolation at home for 4 weeks. I haven’t been out. Nick has been doing the shopping and he has been very careful. He and the girls seem fine.  So it seems strange but if what I had was a normal flu, it was a nasty one.

Please be safe and stay home.

Have you experienced the same symptoms as me? Have you got COVID19?