We were invited to Flip Out Trampoline Park in Brent Cross which has recently opened at this location (the building was a cinema previously). We have visited indoor trampoline parks with the kids before so we have an idea of what to expect but I have to admit that when we arrived we couldn’t believe how big this one is! 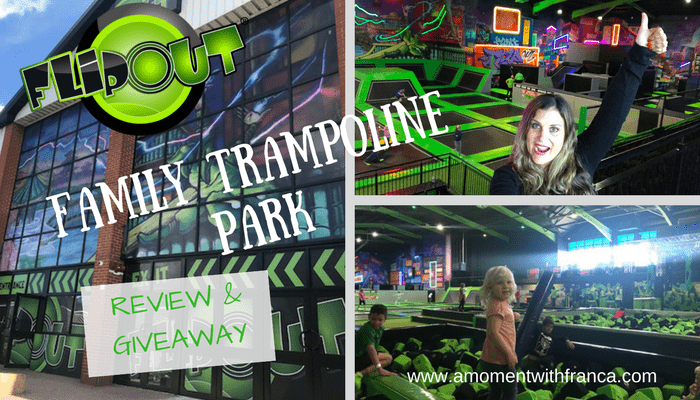 Flip Out Brent Cross is a brand new site for North London which in addition to the trampolines has party rooms, a ninja warrior challenge and coming very soon, a NAIL BAR! How fab is that? So if you have older kids that are happy and able to enjoy the trampolines without close supervision, then you can sit down and be pampered with a nice manicure!

What I found great was that, whilst kids will love this indoor trampoline park they cater for all ages too, so the whole family can have a great time! As well as an adult ‘stunt’ zone, there is a special trampoline area for younger kids under 5 too which is fantastic. I was so excited to test this area with Sienna.

There is so much to keep everyone entertained, such as the huge foam pits, trick park stunt boxes, the ninja warrior course, laser maze, wall runners, battle beams, tumble tracks and so much more!

If you haven’t been to Flip Out before, this video will help you to see what it is like to visit an indoor trampoline park. Flip Out have several trampoline parks around the country so if you like what you see, check them out and pay a visit! 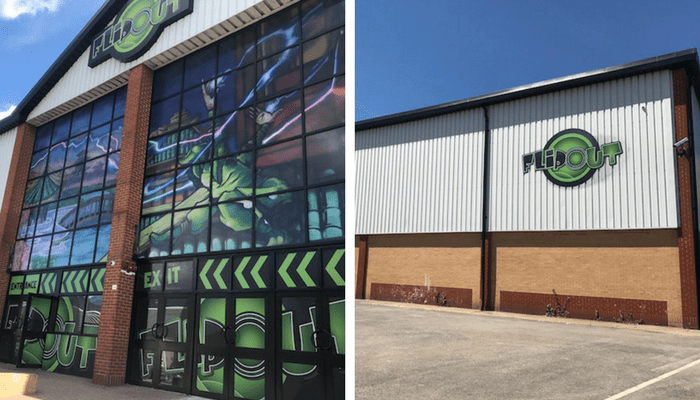 As I mentioned above this place is really big. The outside looks really cool as well as the inside. We signed our waivers online the night before which I recommend you to do too, saving you time when you arrive. We were asked to arrive 30 minutes earlier so we have time to do all the requirements needed before our slot begins. 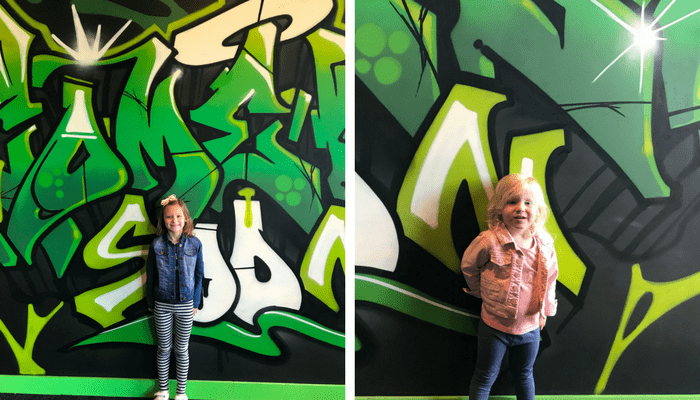 We were given safety socks which were very cool as well as a wristband with a specific colour. This is very important because you will know when you slot ends as they will announce when the people wearing a specific wristband colour should leave the arena. 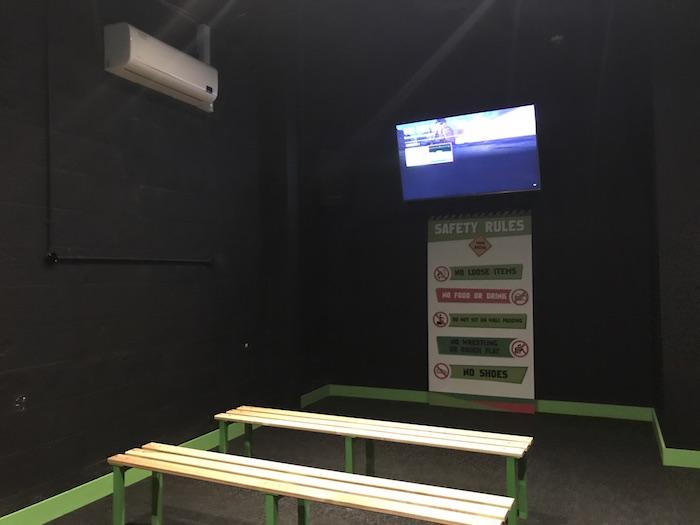 Before we started we were taken to a separate video room where we watched a safety video which explains all the rules and do’s and don’ts. This is very important so make sure you watch and pay attention. For an example, one important rule is that more than one person should not jump together on the same trampoline. 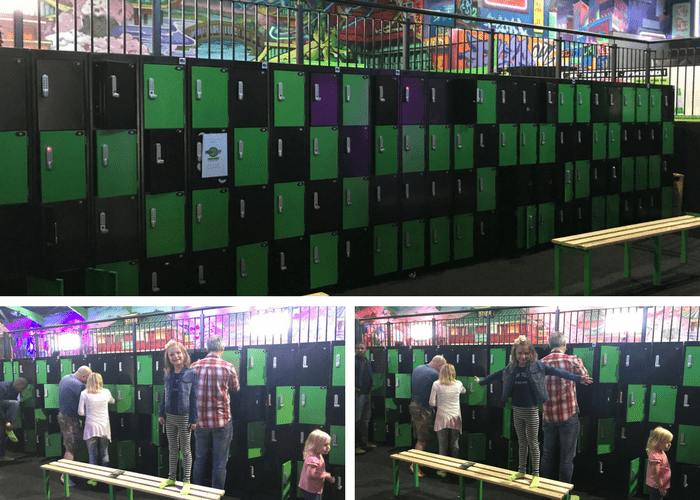 It was great to find out that they have some lockers where we were able to leave all our things in a safe place. They are digital lockers which we haven’t used before so we needed to ask some member of the staff how to use them. It was very easy once we knew how. I advise you to bring a £1 coin for the lockers. 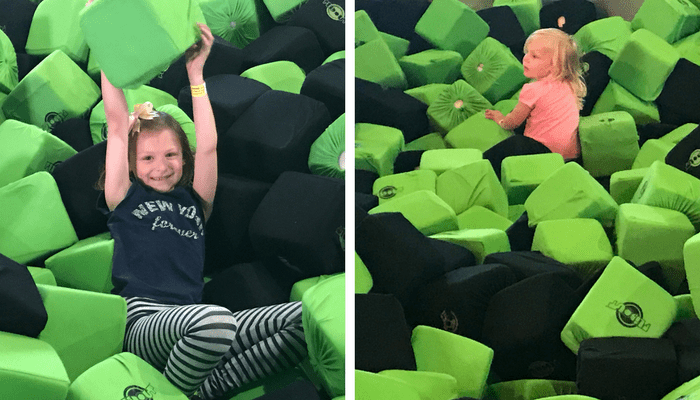 The main arena is AMAZING. I was so impressed. It looks so good. You can tell they have made a big effort to make it look very cool. The have a few walls with the cool graffiti which I had to take photos of! 😉

There is so much to do that you know your kids will be entertained and worn out within an hour. What I like the most is that your kids can have fun in a healthy way. Trampolining is a great form of exercise for our kids (and us adults too!). Some of the health benefits of trampolining include:

Flip Out is the UK’s leading trampoline park operator. Their aim is to deliver massive amounts of healthy and awesome fun. They have the biggest trampolines, stunt box zones, ball games, resident DJs and loads of special events. Not to mention parties, fitness sessions and classes for all ages and abilities. They have over 65 outlets in 7 countries, with many more planned. 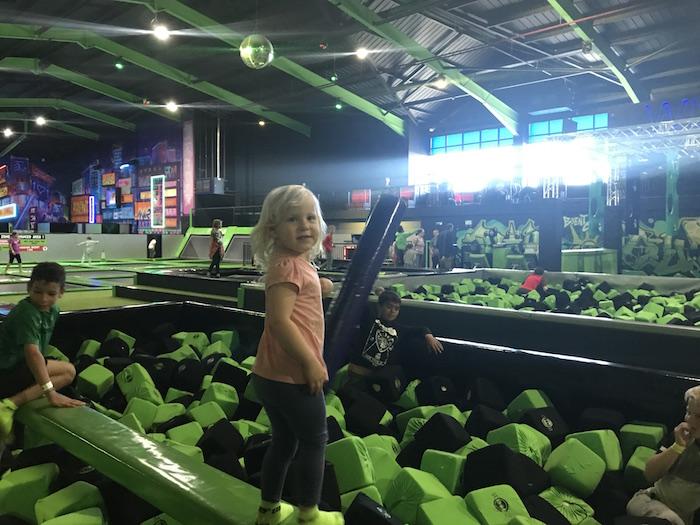 Although I have visited trampoline parks before, I have never actually tried jumping myself, so this time I made sure I was also part of the fun! We all went in together and started jumping up and down on the trampolines. OMG, it was so much fun! I never thought I would enjoy it so much and the best part is that I could really feel all my muscles working! I couldn’t believe that having so much fun could also carry so many health benefits too! 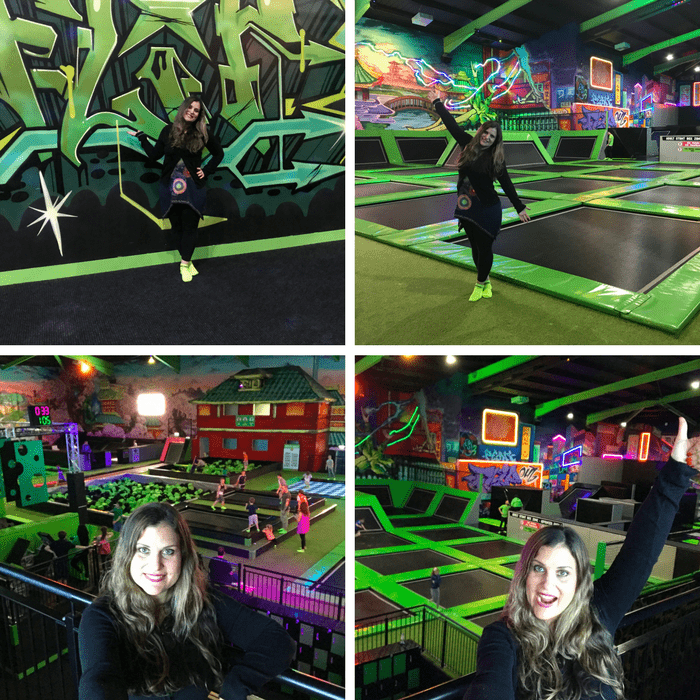 I saw the girls jumping into the big foam boxes and I just couldn’t resist it either. I put myself forward and jumped in after my girls. It was an amazing feeling but the most difficult part was trying to climb out of it! It took me ages! It is the most difficult thing ever. I actually thought I was going to be quick at it and made a joke about how much Nick struggled to get out but I found it just as difficult too! I ended up asking for help so I was able to get out, LOL! 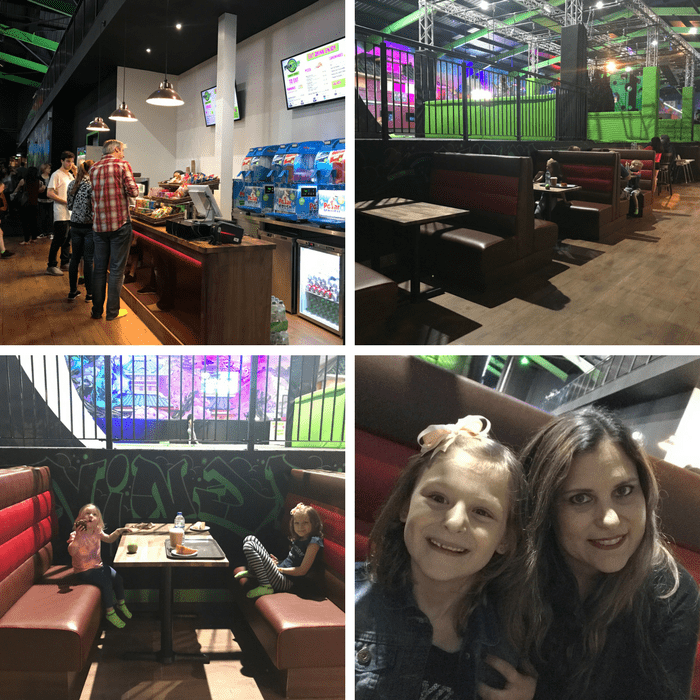 After all of the effort, I decided we needed a break! We all agree we needed something to eat and drink so we went to the cafe area. The cafe is just next to the main arena and you can still see what is going on while you are there. 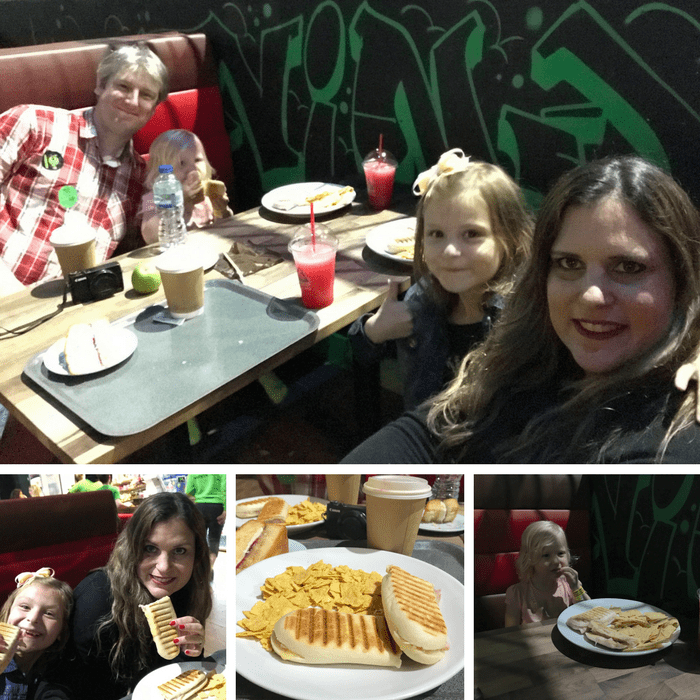 We all ordered panini with tortillas, a cake for pudding and a drink. It was perfect for us and we were very pleased. The girls didn’t finish their panini’s but they gave us some boxes to take them home in which was great. 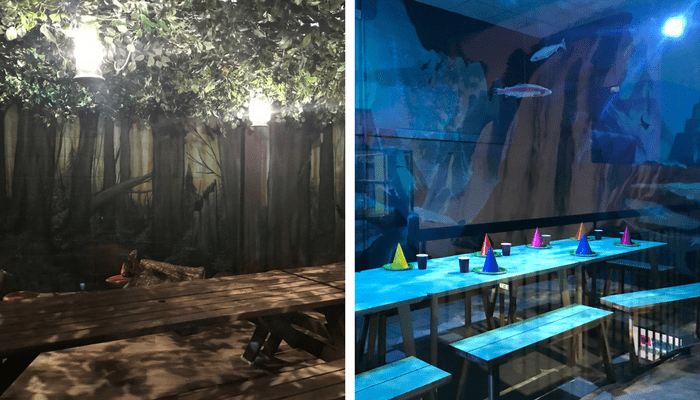 While we were eating, we realised there was a party going on in one of the birthday rooms rear to where we were sitting. After they finished I decided to check out the room which I thought was great! Certainly, it’s a really good idea for a birthday party. I might think about doing this for Bella on her 8th birthday party.

They also have 2 other rooms upstairs which will be ready soon. I can definitely see this being popular for birthday parties in future. 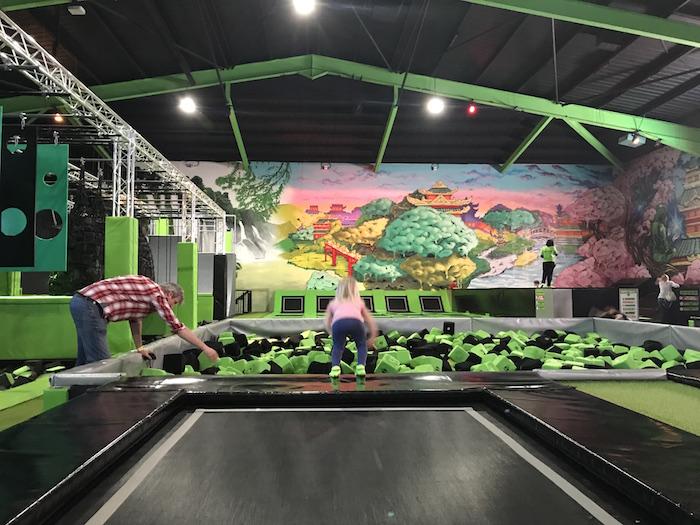 Each Flip Out session is 1 hour long and costs £10 – £12.50. You can book 2 hrs if you want but obviously costs more. You will need to wear Flip Out grip socks which are especially designed to increase grip on the trampolines, reducing the risk of injury, especially on their wall trampolines. The socks cost £1.50 – £2.00 and are yours to keep and re-use.

Children of 13 years and under must have a parent or guardian on site at all times. If you’re between 14-18 years old your parent of guardian must fill the waiver out for you but does not have to be present when you visit the trampoline park. All under 5’s must be accompanied by an adult at all times when in the arena, but the adults don’t have to bounce. 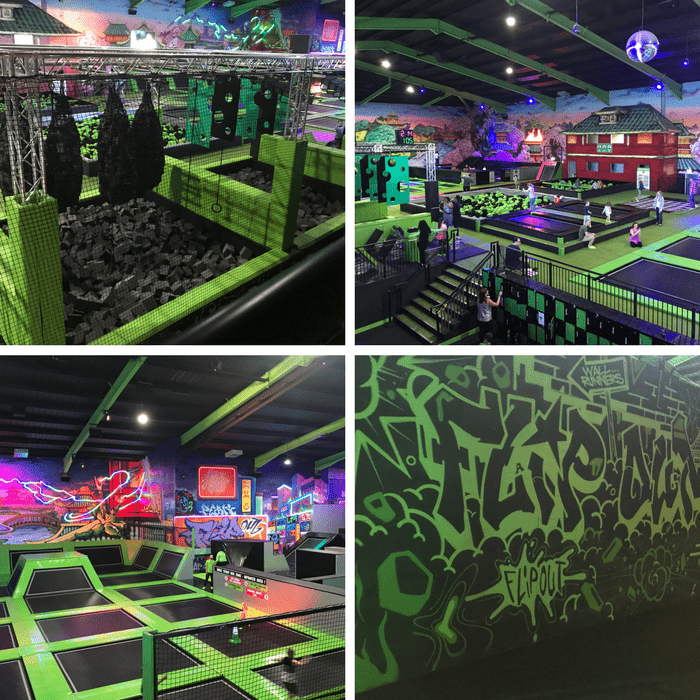 They have a massive viewing platform where you can see the entire arena. It is great if you just want to go and watch but not participate with the jumping. I took some great photos from there.

There will be a few new things coming soon. They will have special sessions for kids with ASD (autism spectrum disorders) and other sensory processing issues (lights will be down and all music will be turned off). There will also have Flip Fit classes for 15+, after dark sessions for kids 13+, little ninja trampoline skills classes for kids 4 to 14 and as I have already mentioned, a nail bar!

All the jumping on the trampolines made us really tired but it was a lot of fun and the kids really enjoyed themselves. It’s great that people of all ages can enjoy trampolining at Flip Out! We highly recommend a visit to this indoor trampoline park.

*Disclaimer: We were invited to visit Flip Out at Brent Cross for the purpose of this review. However, all thoughts and opinions are my own.