We recently received Out to Impress Twinkling Tea lights from Addo to review which is a new product that involves some crafting. Bella enjoys doing these type of reviews so I was excited to show it to her. She was very much looking forward to trying it. 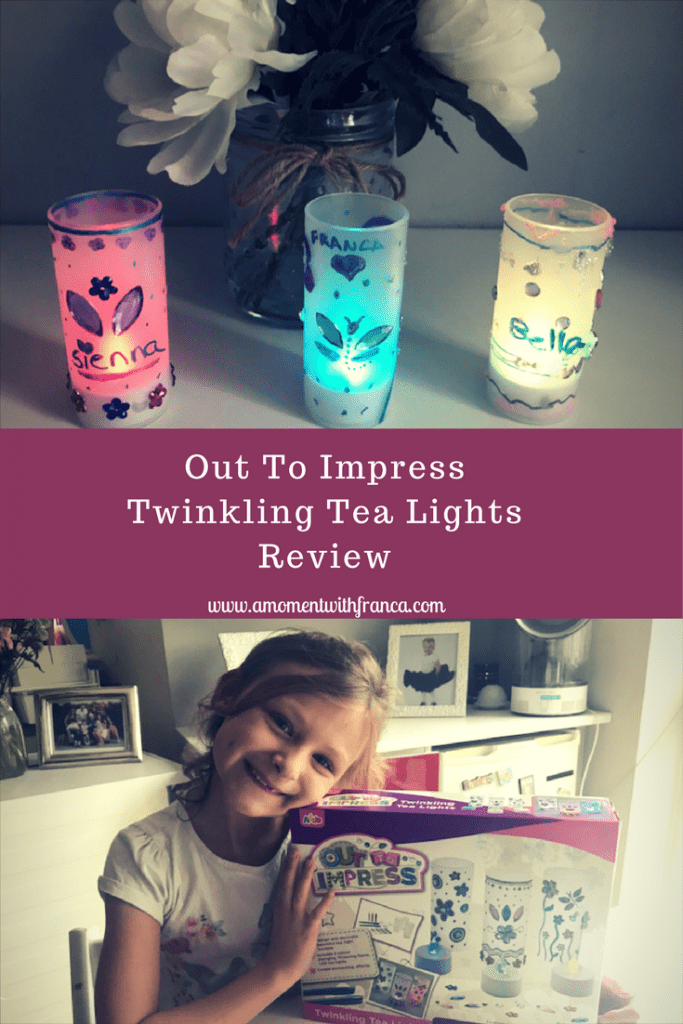 The idea of this product is to allow you to decorate your own Twinkling Tea Light Holders so then you can give your little ones’ bedroom a warm glow, using safe child friendly LED tea lights! 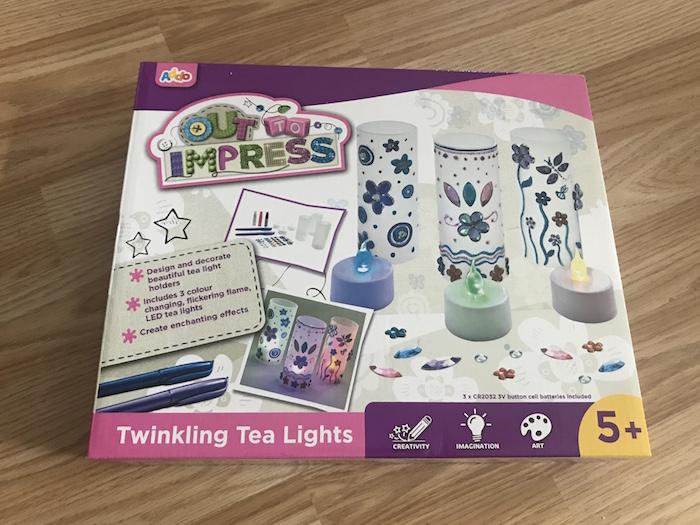 I thought the whole idea was quite different and interesting and the best part is that you end up with something personalised which makes it even more special! 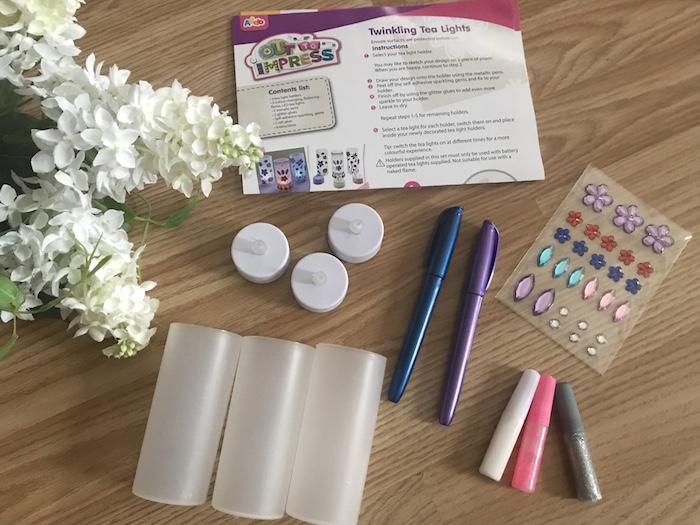 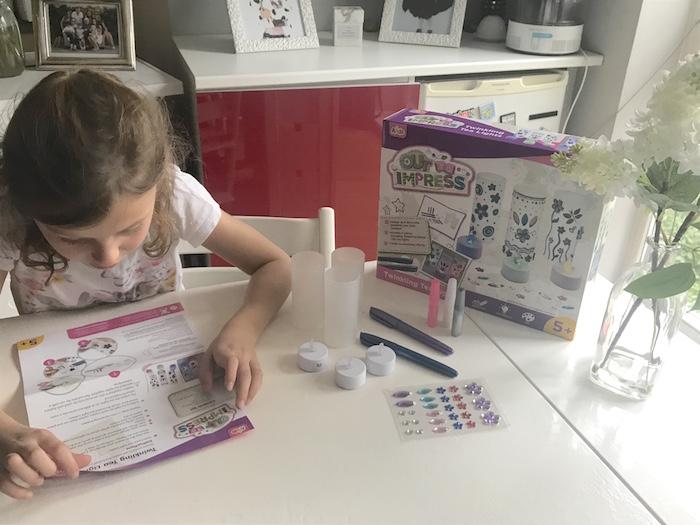 Bella placed everything on the table ready to start decorating her tea lights. She read the instructions first and once she had understood what to do she began decorating her first tea light holder.

From the box, before getting everything out, I thought the holders were going to be bigger and made of glass, but they are actually made of plastic and not as large. I guess this is because glass would be dangerous and it is meant for kids and of course for little hands so perhaps a smaller size is more suitable for young kids. 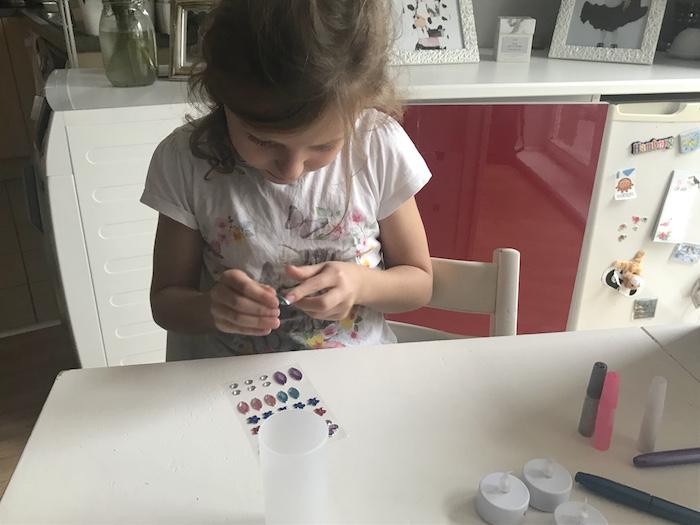 There were 3 tea light holders, so Bella decided that one was going to be for her, the other one for her sister and the last one for me. This way, we all have our own tea light holder! I thought that was very sweet. 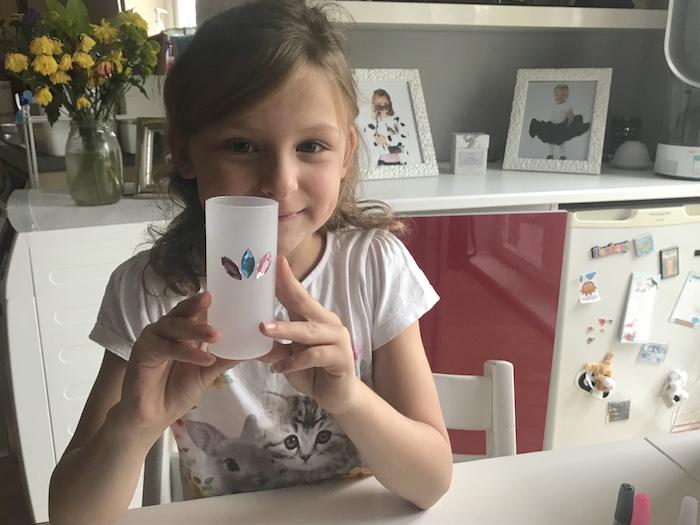 Bella decided to follow the design of one of the tea-lights that was shown in the picture on the box. She got the pen, glue and relevant stickers she needed for that design. 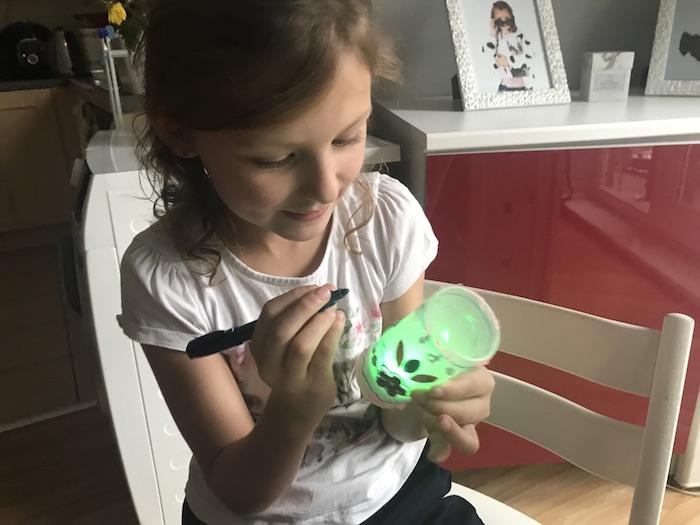 She was very concentrated whilst decorating her tea-light. She used both glitter glue colours and it looked very pretty but the only thing I might say was that it seemed to take forever to dry. Perhaps it would have been better not to use as much glitter glue so it would have dried quicker. 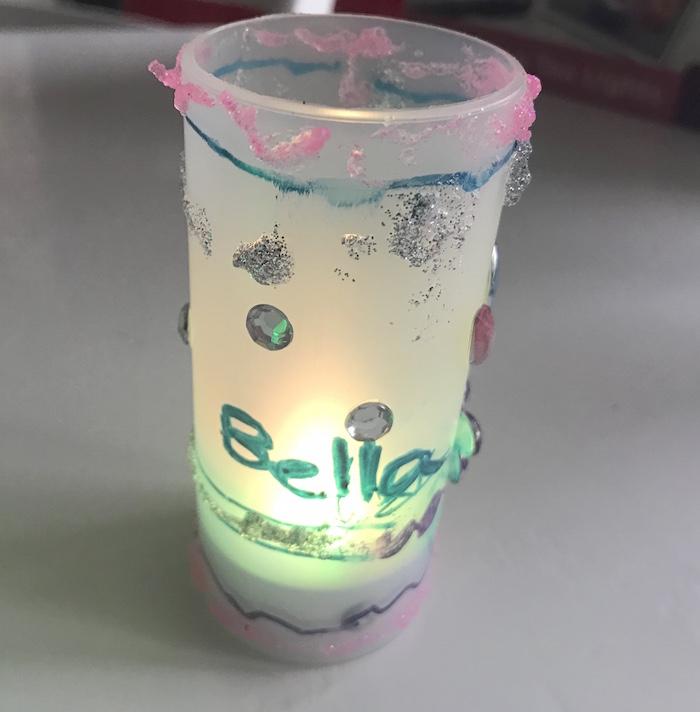 Once finished, she then write her name on it so we knew that one was hers. She then added the LED tea light and switched it on! It actually looked super cool! 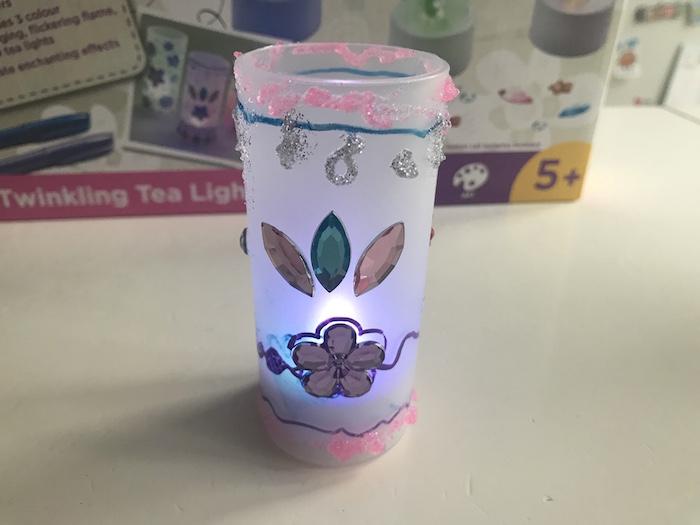 I think she did a lovely job! She was very pleased with it! The only problem was that she put a little too much glitter glue on so there were parts where it clumped up a bit. This made it difficult to hold, especially initially when it was very wet but despite that, it was very cute! 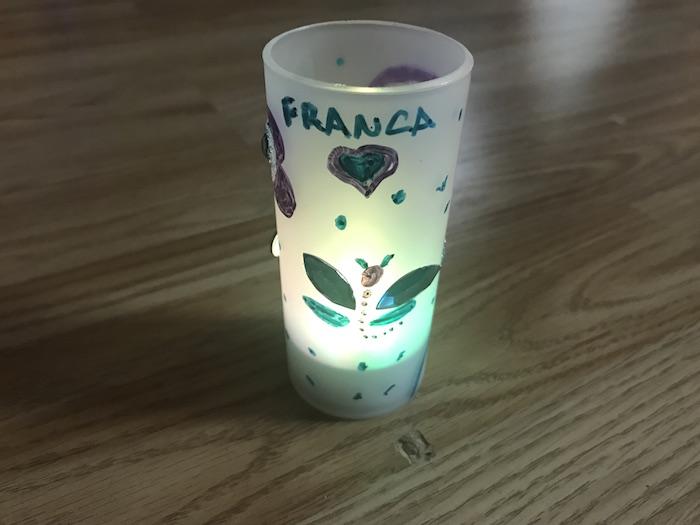 Bella asked me if we could do mine so I was looking forward to trying it too. I decided to use just the pens and stickers. I tried to do a mix of the designs shown in the picture. 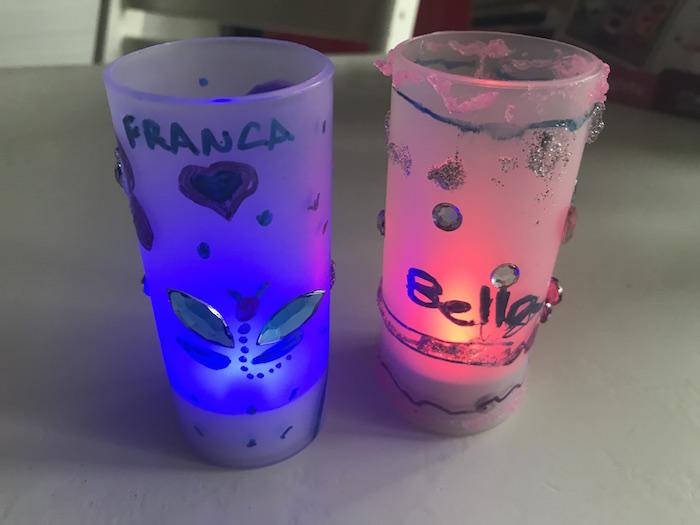 When I was adding the gems I noticed that they were a little bit too big for the holders. I couldn’t stick them very well and one kept falling which was a shame. I guess it could be a good idea if they reduced the size of the bigger gems which might make it easier for little ones to stick them on the holders. 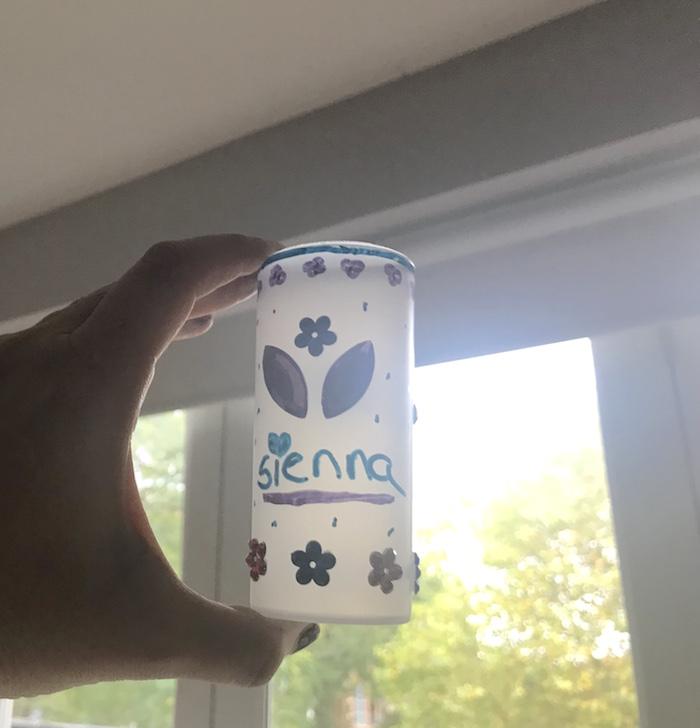 The last holder was a team effort between Bella and I. It was going to be a surprise for her sister for when she came back from nursery. Sienna is too little for this type of crafting so we thought it would be nice to make one for her. 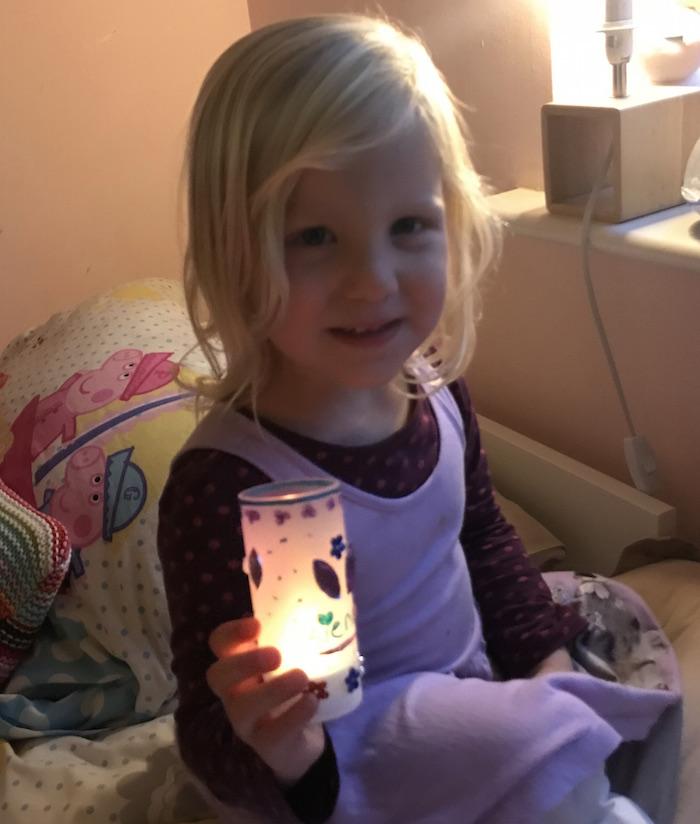 Bella was so excited to give the newly decorated tea light holder to her sister! Sienna was so happy to get one too and she loved the sparkling colours. 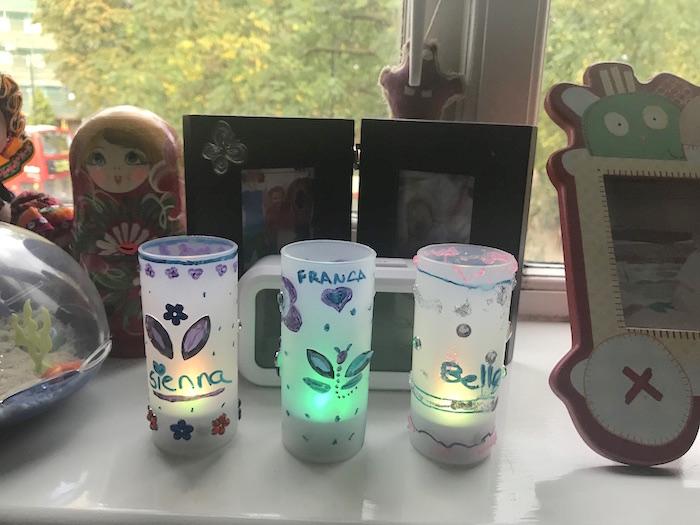 They wanted to put all the tea-light holders in their bedroom over their window to make it look even prettier surrounded by their picture frames and toys! 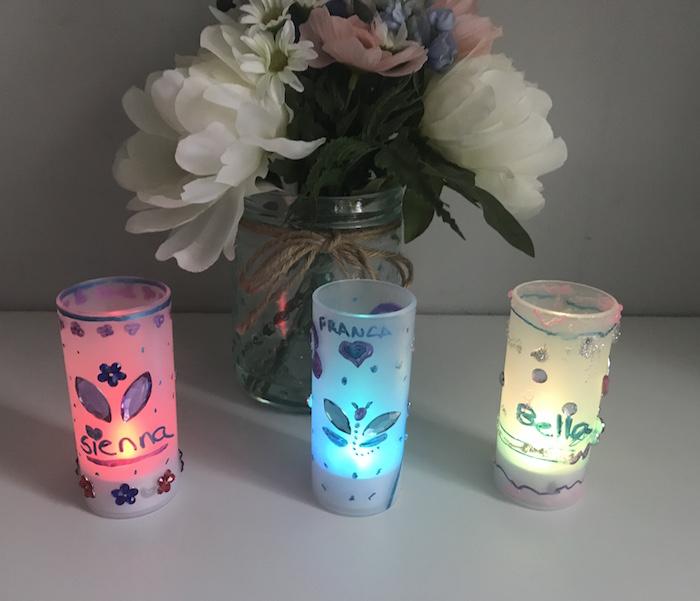 We thought this was a lovely activity to do. We both enjoyed doing it but I would perhaps make a few changes like reducing the size of the gems. Also it would be useful for parents to make it more obvious on the box that they are made of plastic as I really thought they were made of glass. I actually think that it is better that they are plastic so they are more suitable for kids so making this clearer would be better.

We had some fun decorating our Out To Impress Tea Lights holders! ☺️ #crafts pic.twitter.com/bFsf5denvi

Overall it is a really cool, different and fun activity to do with your kids. It is suitable for children aged five and over. It has an RRP of £11.00 and you can buy it in most toy retailers such as The Entertainer and Amazon.

Have you tried doing this type of activity with your kids? What do you think of this Out to Impress range?

*Disclosure: We were sent this product for the purpose of this review. However, all thoughts and opinions are my own.