Drones are increasingly popular and there are now quite a lot of smaller drones on the market, like the Parrot Mambo, which are much more affordable and aimed at people new to drones or who are just looking for a fun toy. These drones either come with a controller or use a smartphone app which turns your phone into a controller. The Parrot Mambo is controlled using your smartphone via the ‘FreeFlight’ app, although a controller can be purchased if preferred. Although basic, like the more expensive drone models, the Parrot Mambo comes equipped with an onboard camera. 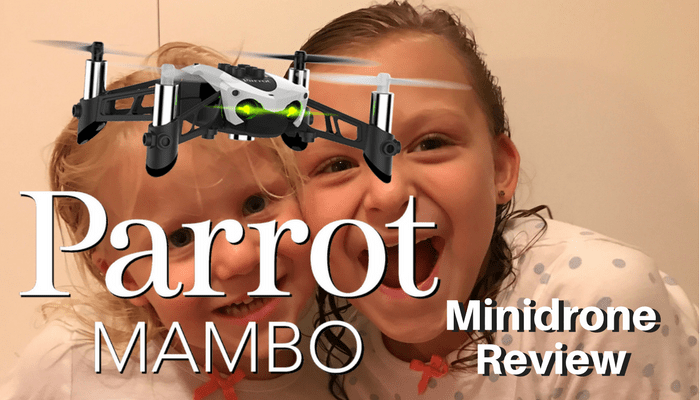 As well as a camera, the Parrot Mambo comes with two other accessories which set this particular drone apart. The first is a cannon accessory which you can attach to fire balls at objects and the other is a grabber, which will clasp and hold an object at the touch of a button. As a drone, the Parrot Mambo is also capable of performing tricks, something else I’ve not seen many other mini drones doing at this price range (RRP £99). 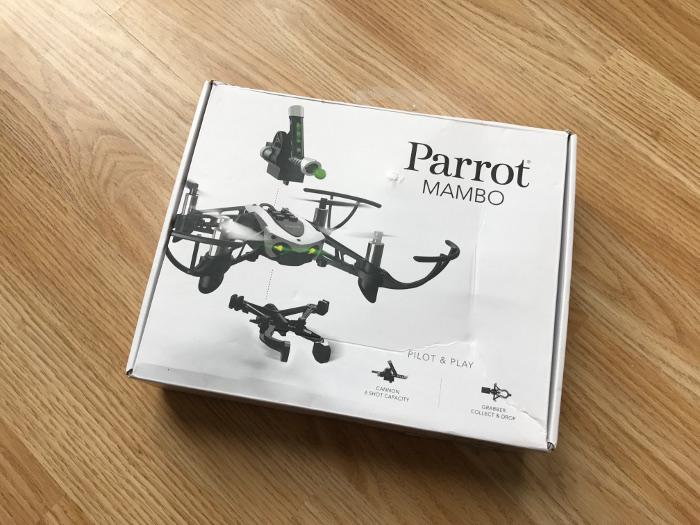 Getting Ready To Fly

Setting the Parrot Mambo up so it’s ready to use is very straightforward too. The chargeable battery that comes with the drone simply needs to be inserted into the main body of the drone. You then use a USB cable to charge the drone via a computer or a USB wall charger. The drone only comes with a charging cable, although again this is fairly standard for these drones and most people have a USB wall charger (for your phone or table) or a computer with a USB socket these days. 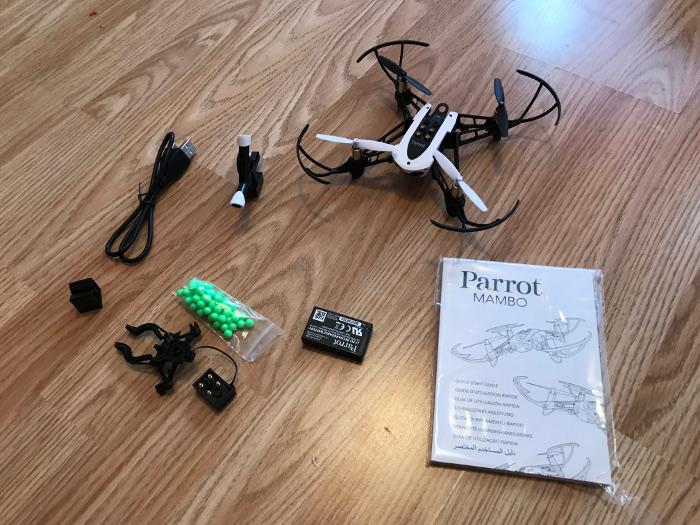 Having had only limited experience of flying drones (and only smaller ones at that), I can still say that the Parrot Mambo was definitely very easy to fly. The controller app comes with a ‘Take Off” button which when pressed launches the drone into the air about a metre from the ground, at which point it then just hovers waiting for your next command! I thought this was amazing as one of the things I have had difficulty with drones previously is getting it to take off without it either slamming straight into the ceiling, or not launching at all (although I think that one was faulty and we ended up sending it back, LOL!). That’s not all though, this drone has another launch option where you can literally throw it (gently of course) and it will just balance itself and start hovering in one spot. This is amazing to see and something my girls loved watching. When you’re done flying a ‘Landing’ button allows you to bring the drone to the ground with a simple touch of your finger – amazing!

The Parrot Mambo is aimed at 14-18 year old’s and is described as ‘Not suitable for children under 14 years’ and ‘For use under adult supervision’, so it’s certainly not a toy for young children. However, this was a great toy for Daddy and the girls enjoyed watching and helping him with it.

To make the drone move, the app has two controls. One is to control which direction the drone will go in and the other is to change its height and to also make it rotate. The controls are easy to use which is down to the Parrot Mambo’s advanced flight controller and high-performance sensors. The autopilot functionality ensures that it will stay stable and hover, even when you are not touching the controls. What’s more, it has an automatic ‘shutdown system’ that disables the motor when it crashes or collides into something. The detachable hull’s which, when attached, surround the rotors protecting it against side impacts. This allows you to use the Parrot Mambo with added peace of mind that when the drone does collide with something you will be less likely to cause damage to either the drone or the thing it hit. This is great, especially when you are getting used to flying it. 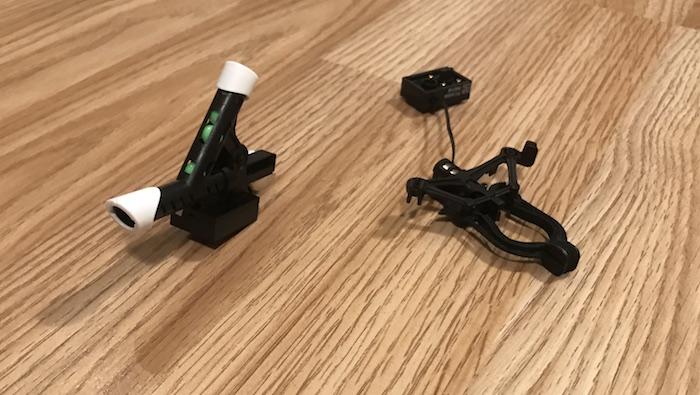 I also mentioned earlier the attachments that come with the Parrot Mambo, a cannon and a grabber which are both easy to attach (but not both at the same time). The cannon lets you load and shoot 6 small pellets, although these are pretty tiny so you need to be careful you don’t lose them. It’s not very strong, which is probably a good thing, but its okay for knocking over things like plastic cups. The grabber attachment lets you use it to carry small objects (upto 4g). This wasn’t easy to do but we were able to get it to carry small bits of paper. When either attachment is installed, an additional control appears in the FreeFlight app to let you operate it, so there’s a button to open and fire the cannon or for the grabber, a button to toggle it between the open and closed positions. 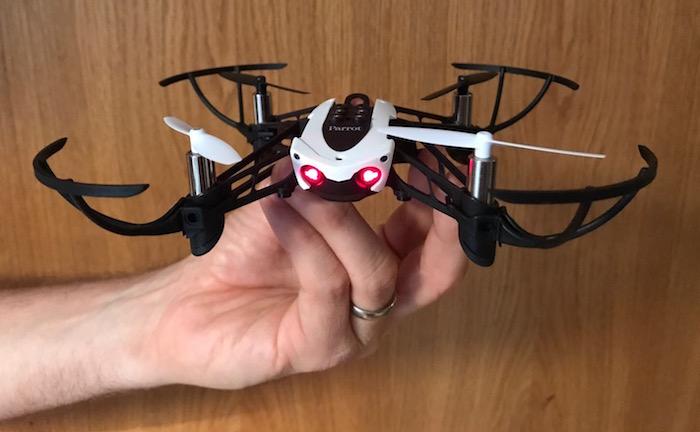 The inbuilt 0.3-megapixel camera is quite basic and is fitted to the underside of the drone. The images we took were a bit blurry but it was certainly fun to be able take a selfie from the ceiling. There is no option to take videos. Transferring the images taken is done via the app. To be fair, given the price and size of the drone I wasn’t really expecting a high performance onboard digital camera.

Probably the biggest criticism of this drone is its flight time. Following a full charge, it’s only capable of about 8 minutes of flight. Again given the price, this is probably expected and similar sized drones have the same issue. I do like the fact that you can remove the battery so if you buy additional batteries you could easily swap in a charged battery and then continue to use the drone. Spare batteries are available via the Parrot website for £13.99 at the time of writing. There is also a battery plus charger for £22.99. 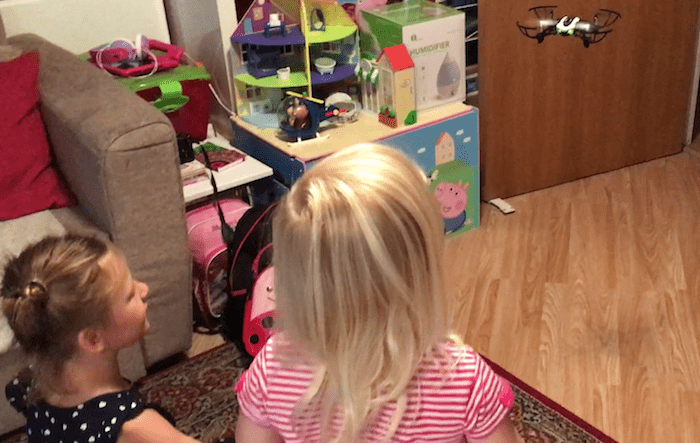 In summary, we really liked the Parrot Mambo drone. It is really easy for anyone with no experience to fly it and to perform tricks. The safety features help to make it durable and the attachments add another dimension of fun too. Whilst there are many more cheaper, mini drones out there, the Mambo has a lot of features that you might expect to see in larger, more expensive drones. It would make a great starter/practice drone for anyone who is considering getting into drones.

The Parrot Mambo can be purchased here for £79.99.

What do you think about the Parrot Mambo mini drone? Do you or your kids have a drone at home? If not, have you considered buying one?

*Disclosure: We were sent the Parrot Mambo drone for the purpose of this review. However, all thoughts and opinions are my own. Contains affiliate links.