The delayed Euro 2020 football tournament will be taking place across Europe this Summer with several games taking place here in the UK including the Final itself. It’s great then that the latest 2021 update for the Sociable Soccer game is now available on Apple Arcade so football gamers can play as their national team. If you haven’t played it, Sociable Soccer is the spiritual successor to Sensible Soccer – a football game series that was highly popular in the 1990’s. Jon Hare, the creator of those games is also the creator of Sociable Soccer. My husband Nick was a big fan of that game and is a fan of the new Sociable Soccer game too. Here are his thoughts on the latest update now available for the game. 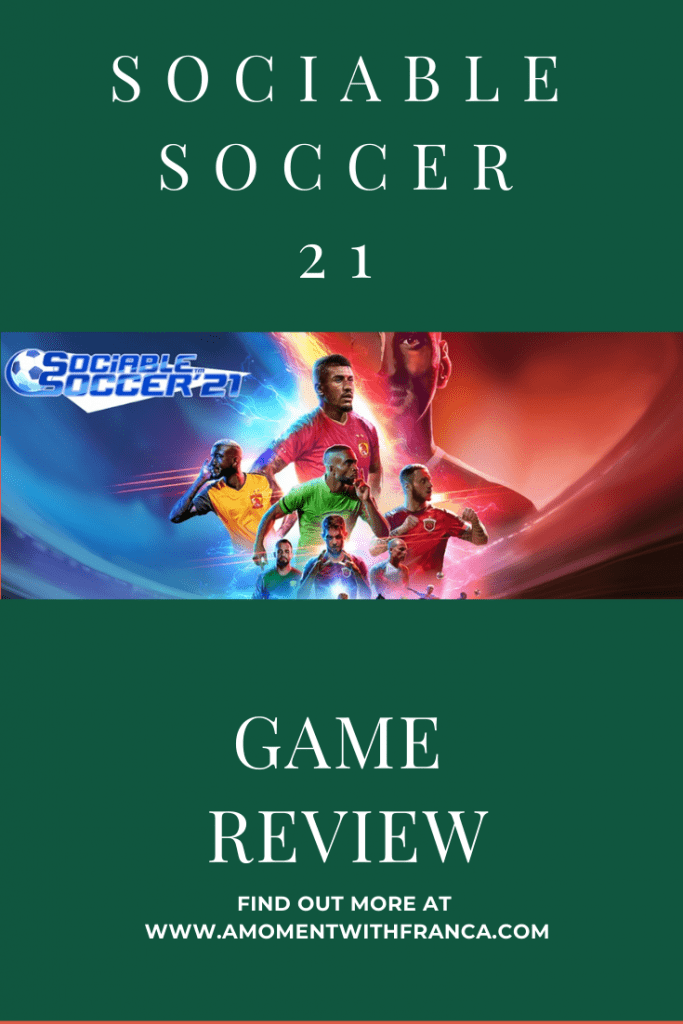 The new version of the game has some great improvements to the graphics. All the screens have been updated, from the menus to the in-game animations, player graphics and the addition of some new referees, instead of the previous one (each with their own traits).

The new version of the game has some great improvements to the graphics. All the screens have been updated, from the menus to the in-game animations and some new referees each with their own traits (where previously it was just one character). For a friendly match you can select the referee – see Crazy Colin in the screenshot below. In the daily matches feature the referee is selected randomly. If you get Crazy Colin then you obviously need to be careful during the game so his crazy decisions don’t go against you!

Another new feature is the in-game animation changes. The player graphics and animations have been updated and look much more realistic. The most interesting change is the goal celebration animation where the scoring player does a cool celebration dance (see below).

The in game user controls have been updated too with a new Sprint button for touch screen players (the game can be played with a controller or also on Mac or Apple TV) making it much easier to make players run faster.

The main in-game settings menu is accessed via the blue pause button in the top centre of the screen. This is great because I used to catch it with my finger easily when it was in the top right of the screen. You can see the options menu once selected in the screenshot below. This is much better organised. Previously, each of these icons was displayed on the main screen, taking up valuable screen space.

Given the game has ‘sociable’ in its title it’s great to see this update has a new feature to make playing games against other players more interactive. This is the new in-game chat feature, which allows you to select from various phrases that when selected will be visible to your opponent. Phrases they select will also be visible to you. So you can taunt or complement them as you see fit, which adds a bit of fun to things! This option is available at the start, and end of the game as well as after a goal has been scored.

The game itself is much improved. It’s now much harder to score headers where previously this was sometimes unrealistically easy. definitely much more difficult to score now. The opposing teams are a bit more skilful – it’s great to see them doing more long balls and chips. Players now move according to their ability, so only the best players can turn quickly. The idle control mode replaces the previous ‘autoplay’ feature, which I think will be great for new players as you get AI assistance to actually move around the pitch but you can press the controller buttons to shoot/pass etc.

Overall the game is much more improved making it better for both new as well as more experienced players. My favourite change is the in-game chat. It’s a shame it’s still only available on iOS devices but I understand the developers intend to release it onto consoles and other platforms in the hopefully not too distant future. Another niggle for me is the player names now seem very different and unrecognisable from the corresponding real-world player – my assumption here it’s for legal/licensing reasons (club badges are no longer similar to the real club badges – which I suspect is because of similar reasons).

There are a few minor bugs (win streak mode reduces available league games / in-game tactic change button is missing) which I’m sure the developers will fix with an update soon. Again it’s a really great improvement to the game, so if you haven’t played it before and have an Apple Arcade subscription, go and give it a go now. The game can be downloaded here