On Sunday we went to a super cool event. It was a Christmas Party organised by the lovely people at Anki Overdrive. They were showing their latest products over 5 different tracks within the 2 floors of a cool pub in London, The Driver. 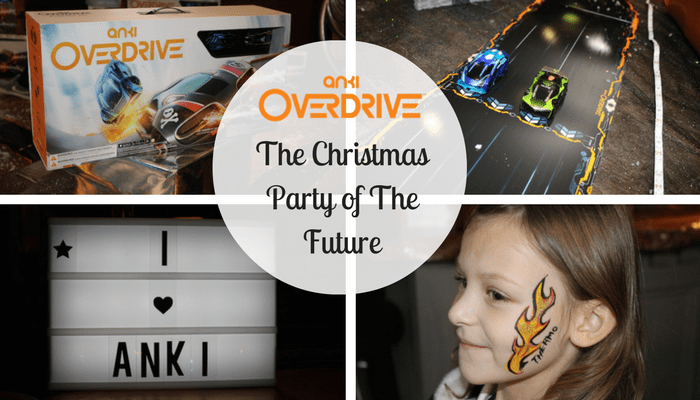 Anki Overdrive is the world’s most intelligent battle racing system. Its technology is so advanced that it really feels like the future. Each Supercar is a self-aware robot, driven by powerful artificial intelligence (A.I.) and equipped with a deadly strategy. Whatever track you build, they’ll learn it. Wherever you drive, they’ll hunt you down. The better you play, the better they become. Whether you battle A.I. opponents or friends, your tactical options are unlimited. Also, with regular software updates, the gameplay always stays fresh. Customize weapons. Swap out cars. Build new tracks. It’s easy to pick up, and nearly impossible to put down. How amazing is that?

You can see a short video we made about the event below: 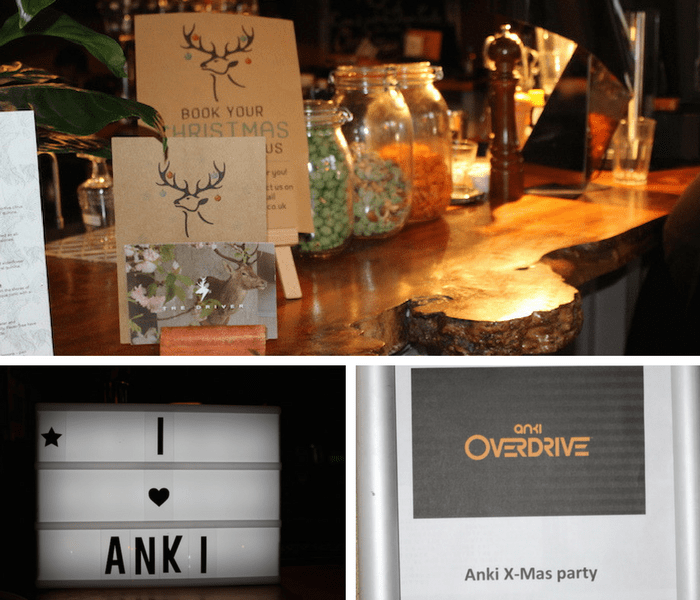 Obviously when we heard that we were able to test their products we were really excited about it. We had heard of the Anki racing system before but we hadn’t had the chance to try it for ourselves. It was great then to get the opportuntity to have fun with the 5 tracks that Anki had set up for to try at the event. 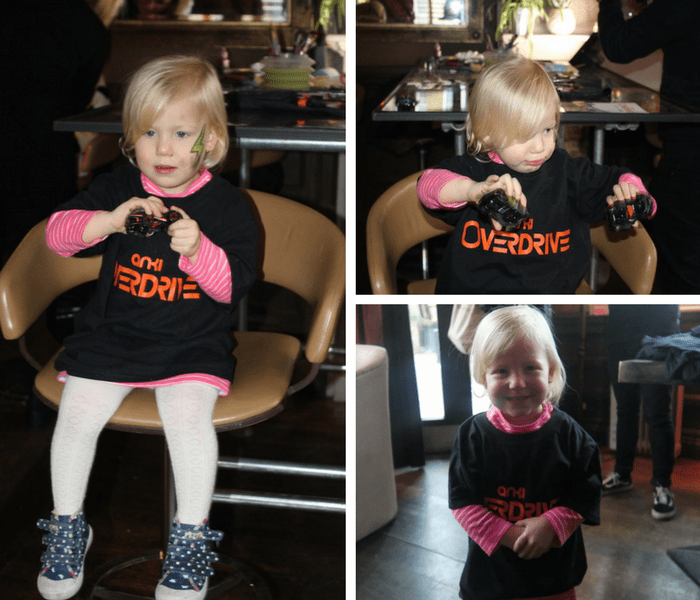 When we arrived, the girls were each given an Anki Overdrive t-shirt. They were black with the orange Anki Overdrive logo. They looked really nice. Sienna seemed to be really happy to wear hers – she looked so cute in it! 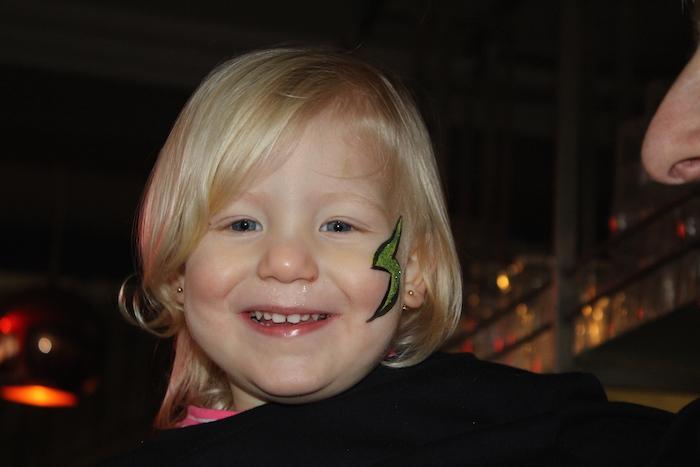 Then, the girls were offered some face painting. This is always a hit with my girls. Sienna went first and she behaved amazingly well. I was impressed as I thought she would move but not she waited patiently until her face painting was done. The lady did a fab lightning bolt on her face. It looks really cool!

Then it was Bella’s turn. She had a flame instead which was really nice too. I loved it! I thought the golden sparkle paint was really cool! Bella was very happy with it. 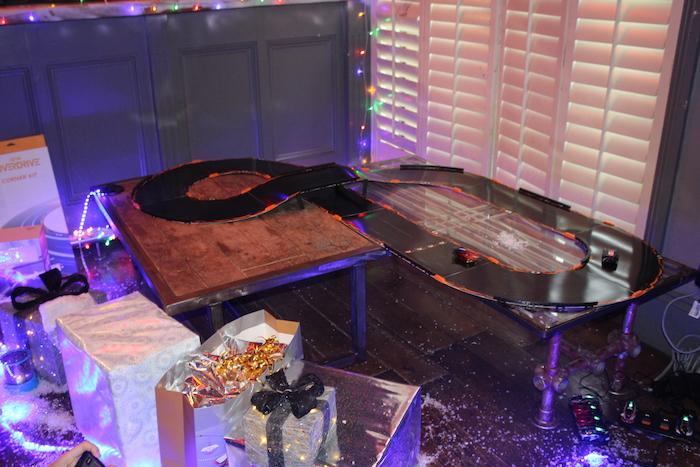 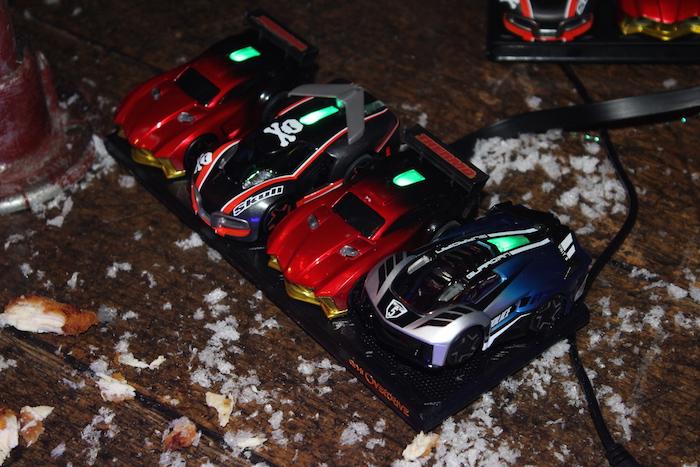 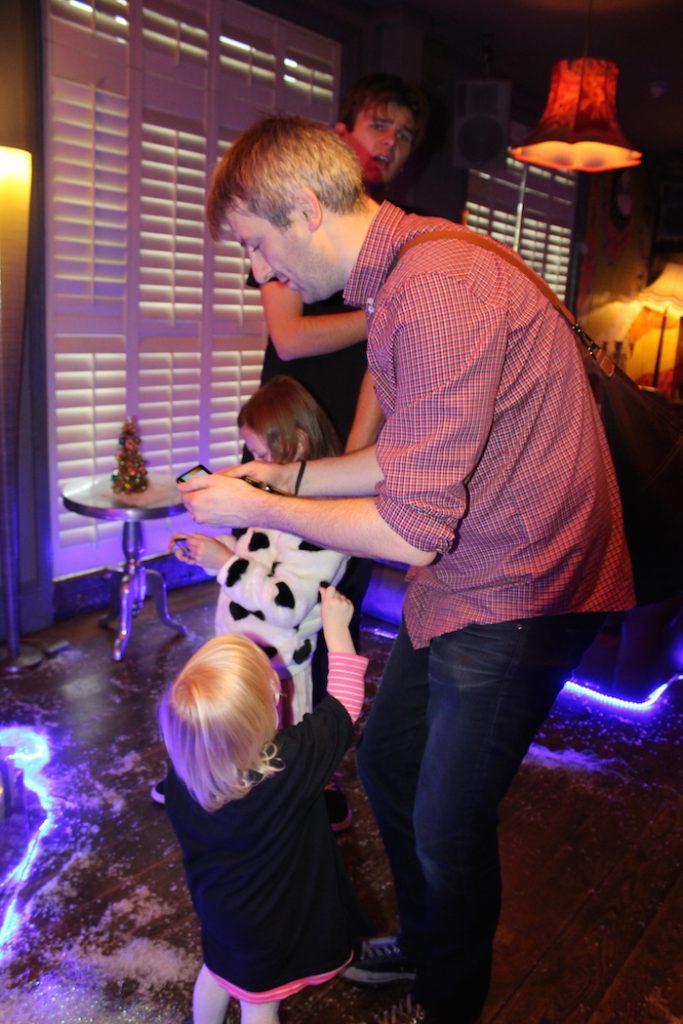 We then went upstairs to have a look at the 5 tracks. We actually tested 3 of the 5 tracks as  it was a little bit busy so we were glad to be able to try the ones we did. We did the starter kit track which was great as we managed to learn a little bit more about the game. Nick and Bella gave it a go. They had fun competing against each other. 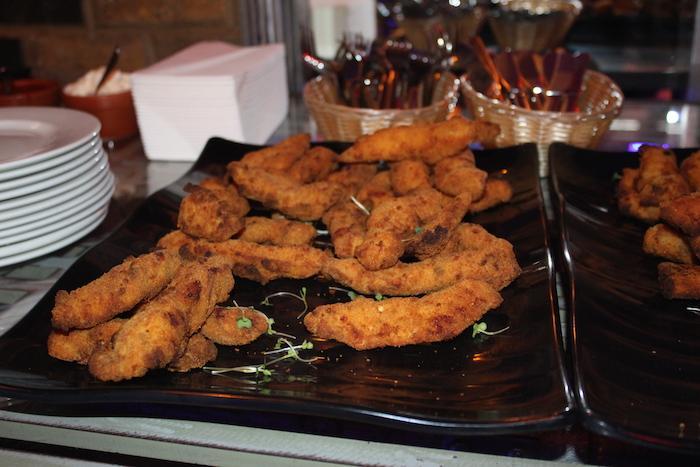 During the party we were offered food and drinks, so it was nice to be able to nibble some chicken nuggets, pizzas, bread, salad, etc. The chicken nuggets were delicious. I think I ate all of them, LOL Just kidding, but they were really tasty. My girls also liked them. 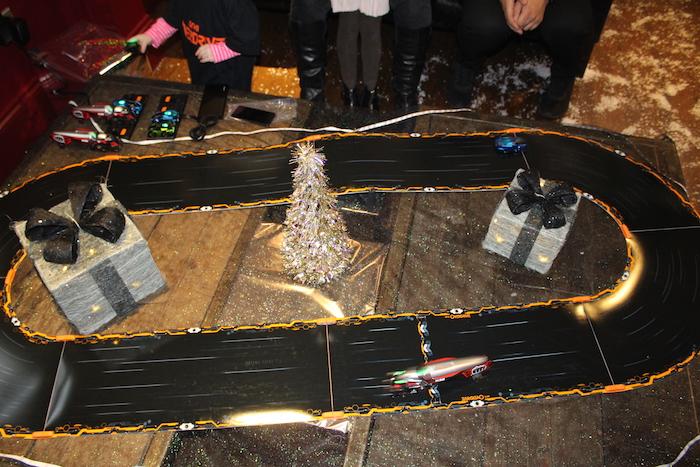 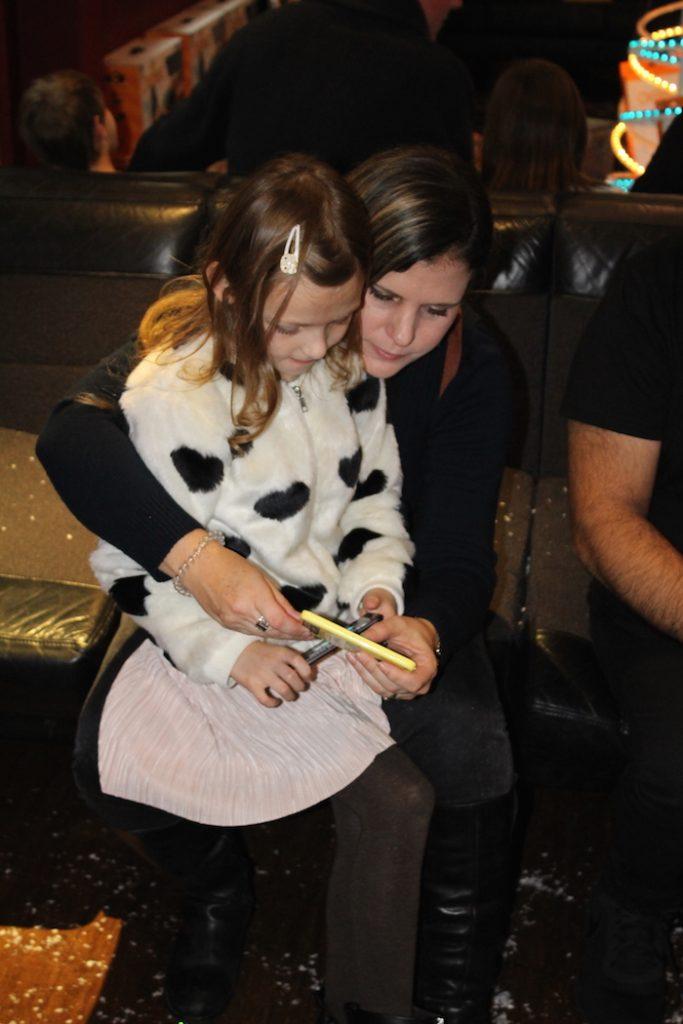 After having something to eat we decided to go upstairs to explore the other tracks. We were lucky because the one with the trucks was free for us to try. The guy from Anki helping us there was so nice. He really explained to me and Bella all the details. It was the first time for me so I really needed a step by step explanation.

Bella and I decided to play against each other. It was fun trying to kill each other’s cars, LOL! She actually beat me the first time and then when we played again I was lucky and I managed to win. It was really entertaining. The system is super clever. I was very impressed. I really like the big trucks. They were very cool. 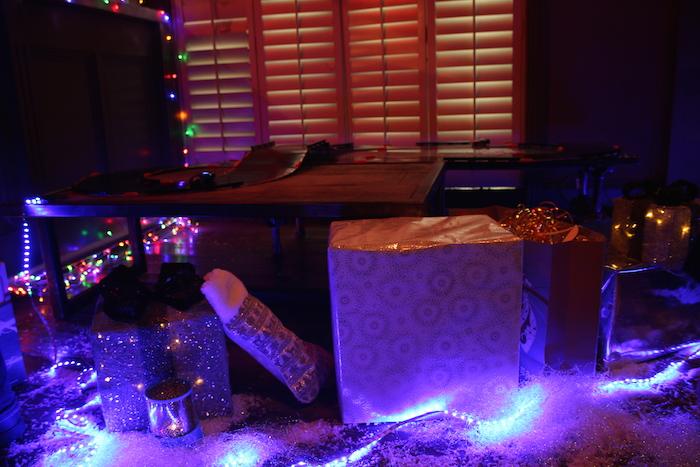 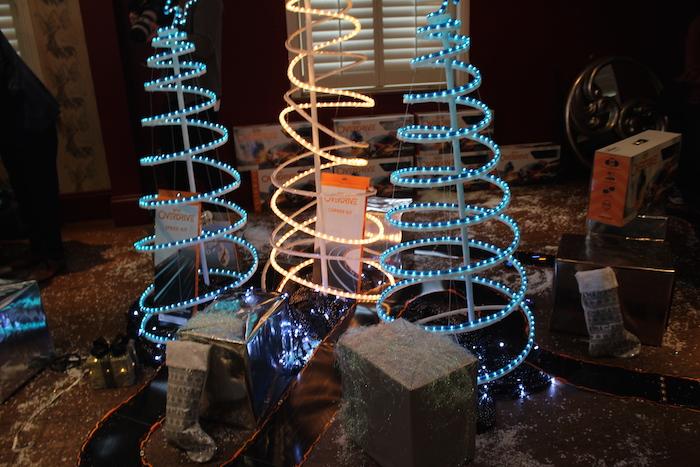 Because the theme of the party was “The Christmas Party of the Future”, obviously the whole decoration was about Christmas. So we had Christmas trees, fake snow, Christmas presents (boxes beautifully wrapped for Christmas), and of course lots of Anki Overdrive product boxes everywhere. 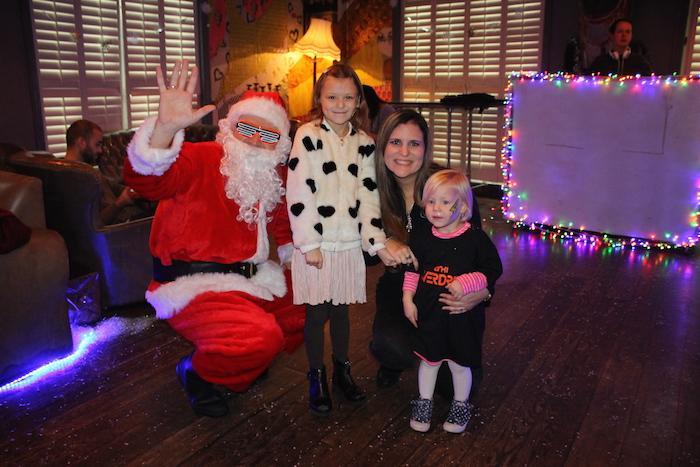 Of course, a Christmas Party wouldn’t be complete without Santa! Yes, he was there, looking cooler than ever! He had a very futuristic look. That much so that my girls didn’t want to say hello, LOL! However we did manage to have a nice picture together! They also had a DJ who was playing great music. I really liked that as there is always a creates better party atmosphere when you have cool music. The party came alive for sure! 🙂 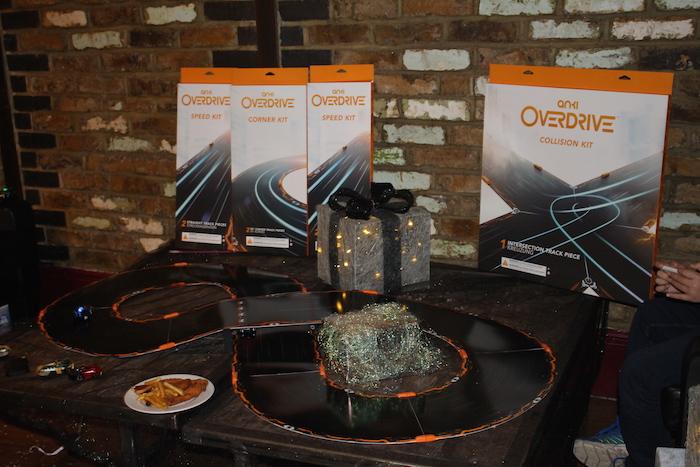 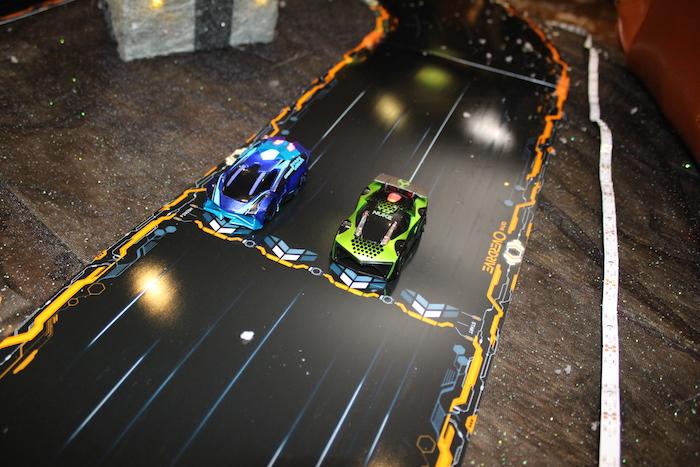 We then tried another track. The problem was that little Sienna was getting restless and she really needed a nap so after the last test we decided that it was time for us to leave before she started to destroy all the decoration, LOL! Seriously she was all over the place and also all over the tracks as she wanted to pick up the little cars! It was crazy, but thankfully the staff were cool about it! 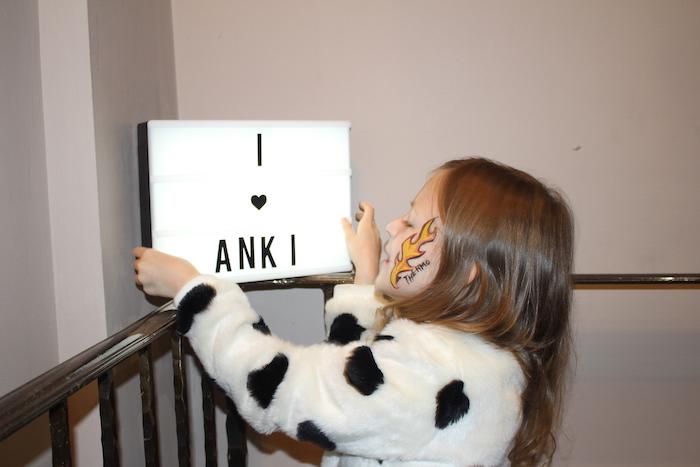 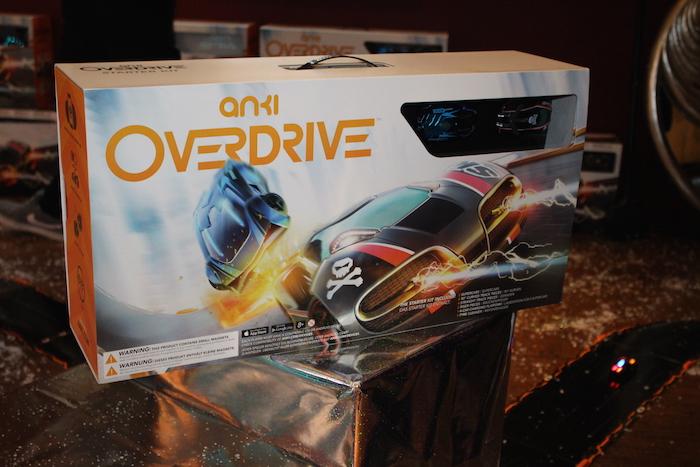 Before we left, we got a goodie bag for each of the girls. They were very excited to find chocolates inside each bag which disappeared in a minute, LOL.

We had a lot of fun at this event, it was really cool to try this game and now we are looking forward to receiving a starter kit to test it properly at home! Watch out for our review soon! Thanks so much ANKI for inviting us to this event. We really enjoyed it! 🙂

What do you think of this event? Have you heard of Anki Overdrive before? Have you seen this game before or tried it before? Do you have something similar at home? Please leave a comment below as I would love to hear what you think.

*Disclosure: I was invited to this event to be able to test and see Anki’s latest products. However, all thoughts and opinions are my own.

✨𝔸𝕤𝕥𝕙𝕞𝕒✨⁣ ⁣ If you follo