Hola chicos, Christmas is upon us and we have been busy getting everything ready for it! This is the perfect time of the year to sit on your sofa with a cup of tea or a coffee, a blanket to warm your legs, cuddled up with your hubby or partner in front of the TV to finally watch a proper drama! Wouldn’t this be lovely? I bet you agree with me, especially about being cuddled up with the hubby, LOL! 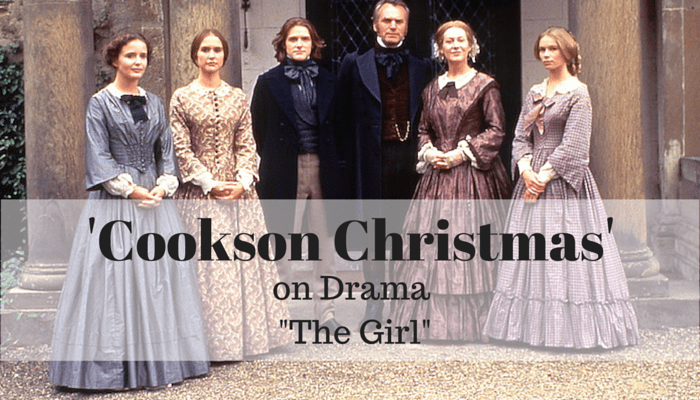 During the Christmas season Drama, a free-to-view channel launched two years ago, predominantly showing classic dramas, are set to launch the showing of a series of Catherine Cookson TV adaptations. Drama believes that nothing beats the thrill of a good drama and that the best stories never grow old. Like me, they love that Sunday afternoon sofa feeling in front of the TV ;-)! Finally, they look at their titles with an affectionate insight and believe that drama is best sold through familiarity: famous faces, and themes that we can all relate to.

For those who don’t know who Catherine Cookson is, she is one of the world’s most beloved British writers. Her books have sold millions of copies and have been translated into twenty languages, with numerous adaptations for radio, film and TV. For decades she was the most borrowed author in UK libraries and this is because her characters and their stories have captured imaginations the world over. She was among the literary pioneers to be interested in portraying not the aristocracy but the common man in the 19th century: their ambitions, struggles, family dynamics, romance and to tackle important issues, from women’s rights to interracial marriages.

I was thrilled when I was approached by Drama in order to review one of Catherine Cookson’s TV adaptations called The Girl. I knew it was going to be a good film because Drama are known for showing quality, classic, interesting and relatable dramas.

Her name was Hannah Boyle, but to the people of the village she would always be “The Girl” – Matthew Thornton’s bastard. Savagely treated by Matthew’s wife, Anne, she fled for protection to the devil-may-care horse-dealer, Ned Ridley, who had earlier befriended her. But, as the waif grew to beautiful womanhood, she became an object of desire to the local young men, and even to her half-brother. Against her wishes, she was married off to a gross, sensual man, but Hannah kept on fighting for the man she wanted: Ned Ridley, who adored her and taught her the meaning of true love and passion.

The story begins in Northumberland in 1850 with a Young Hannah looking for help because her mother is ill. She trespasses into Ned Ridley’s property desperate to ask him for help. Agreeing to help he then follows her. He finds her mother and takes them to see his Grandad who tries to help her too.

They stay there until Hannah’s mother feels better as she really wanted to go to the Thornton’s House to speak with Mr Matthew who was a gentleman. Ned offered his help to take them although he was more interested to see how Mr Matthew was going to react.

At the Thornton’s house, Hannah’s mother who is almost ready to die, tells Mr Thornton that Hannah is his daughter and that he needs to take care of her from now on. Mr Thornton agrees and lets her stay although his wife Anne is in complete disagreement with this and resents her for staying. Hannah’s mother dies when leaving the Thornton’s property and hands over a letter to be opened when she gets married.

Mrs Thornton tells her three children they are not allowed to talk or play with Hannah. She is told to stay in the kitchen helping the servants. Hannah’s life is a nightmare as Mrs Thornton sees her as proof of her husband’s infidelity. Things get worse and one day Hannah, whilst playing, tries on some of Mrs Thornton’s jewellery, who then arrives and sees this, but declares that she is stealing it rather than just trying it. She gets really angry and whips Hannah.

Mr Thornton finds out about the incident, he is completely unhappy about it, and whips his wife as retribution. From this moment, he decides to change the rules in the house and how Hannah is to be treated. She is to be treated as his daughter and an equal to her siblings.

This is initially a good thing as Hannah is sent to school but as time passes her struggles in life continue as through unfortunate circumstances she is eventually forced into a marriage with someone she does not love. Hannah is actually keen to find a proper love to be her husband and there are a couple of potential candidates along the way!

Of course Mrs Thornton delights in getting rid of Hannah, by seeing her married off. Things get more interesting when Hannah finally gets to open her mother’s letter, but is the information it contains useful, or is too late?

Ned is always a present figure in Hannah’s life and they get along very well. She always ends up being protected by him. They have a chemistry between them which was interesting to watch. Their love begins to blossom but is it too late after being married off to the local the butcher?

Hannah has a very obstinate and strong character making her determined to succeed in spite of all the bad luck, setbacks and sadness in her life. Being married off to the wrong man was not going to be an obstacle in getting the man of her dreams.

Will she be able to get her man or will she have to stay with the butcher? Well in order to find out more about this film you will have to go over to Drama during their ‘Cookson Christmas’ season from the 20th December to the 31st of December. You can watch Drama on Freeview channel 20, Sky or Virgin. You can also find them on Facebook and Twitter.

I very much enjoyed watching the story unfold, in spite of a few scary moments such as when Hannah and Mrs Thornton are whipped. It wasn’t obvious how things would end or whether Hannah would finally find happiness. She is an admirably strong, determined woman who has to deal with some quite horrible people, some of whom have her best intentions at heart. However, this is the kind of period drama that allows you to get lost in the story and you really hope things work out for Hannah.

Drama also asked Laura Summers from Laura’s Lovely Blog to do a review of the same film. I thought it could be interesting to read what Laura’s perspective of it was. If you are also interested in reading her review you can pop over to her blog here

Have you watched dramas on Drama before? What do you think about the ‘Cookson Christmas’ promoted by Drama? Will you be watching some dramas over Christmas? Have you heard of any of Catherine Cookson’s TV adaptations? Have you watched them before? Have you watched The Girl before? If so, what did you think? Leave me your comments below as I would to know what you are your thoughts.