You have probably seen my previous blog post about our experience at the Goodbye Christopher Robin World Premiere. One of the activities organised around the release of the movie was a visit to London Zoo. If you have seen the movie already, you will have seen that some parts were filmed there. 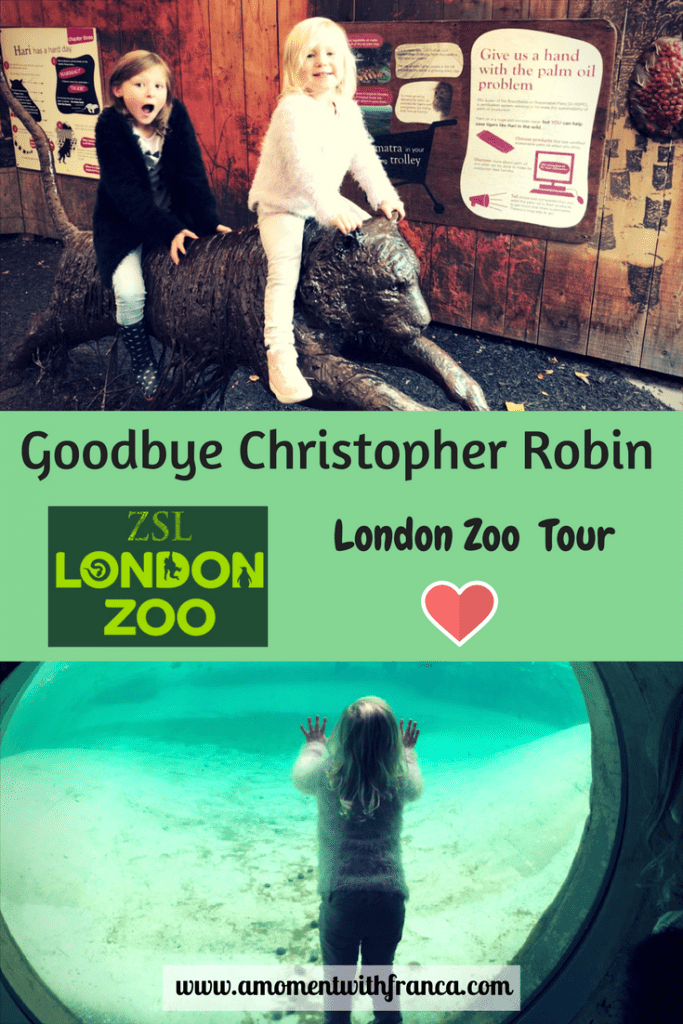 Winnie the Pooh has some special connections to London Zoo, so to celebrate this we were invited for a lovely tour of the zoo to explore the history. We were actually very excited to visit the zoo because after watching the movie, I thought it could be interesting to spot the places that were used to film. 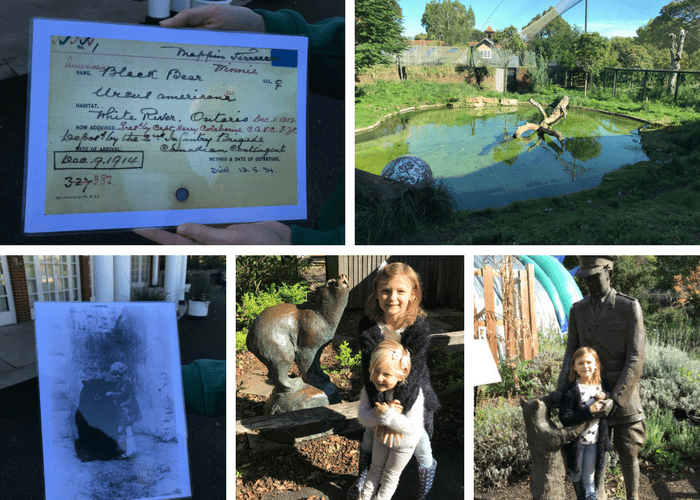 Apparently, Winnie the Bear was actually a real Black Bear that was brought from Canada to the UK in 1914 by Captain Harry Colborne. She stayed in London Zoo until she died. She was a friendly bear and very fond of kids, that is why Christopher Robin loved to visit her. She was the inspiration for the name of Winnie the Pooh. You can see above a photo of the real Christopher Robin with Winnie the Bear!

We had a short private guided tour at the start of the day to explain us a little bit more about the connection between Winnie the Pooh and London Zoo. We were given the tour where the bear was kept (and they filmed near there too) but now this area is the kangaroo enclosure. 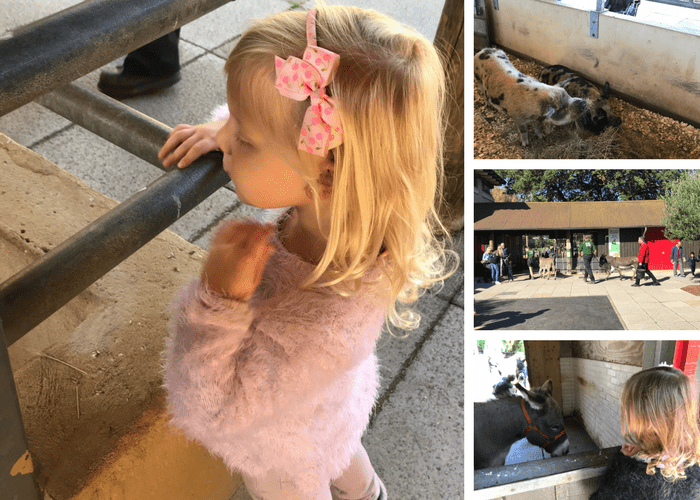 We then went to visit the area with pigs and donkeys! We were then reminded about Piglet and Eeyore! The donkeys were being given their food when we arrived and then they were about to be taken for a walk. There were also a lot of very large pigs around that definitely didn’t look like Piglet from the Winnie the Pooh story, LOL!

FARM AREA FOR LITTLE ONES – GOATS 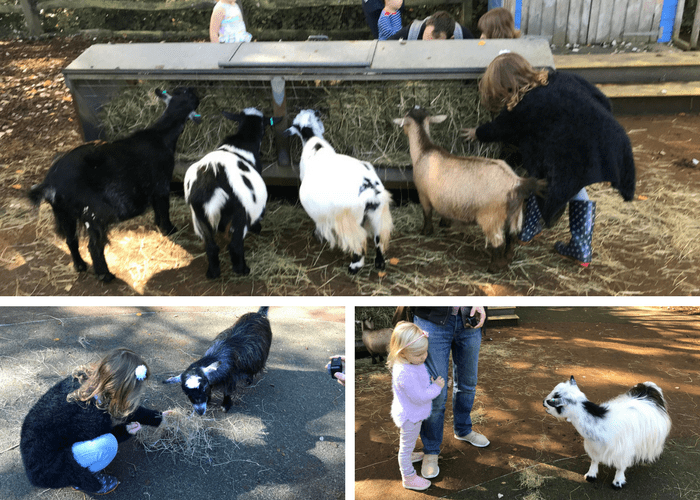 After visiting the pigs and monkeys, we went into a gated area where the young goats are kept. This is perfect for little ones to go around and explore. They were lots of little goats around. Bella is an animal lover, so she was completely in her element. However, Sienna is a little bit more weary of them and was a little bit shy! However she was brave enough to be near them if she had someone next to her. 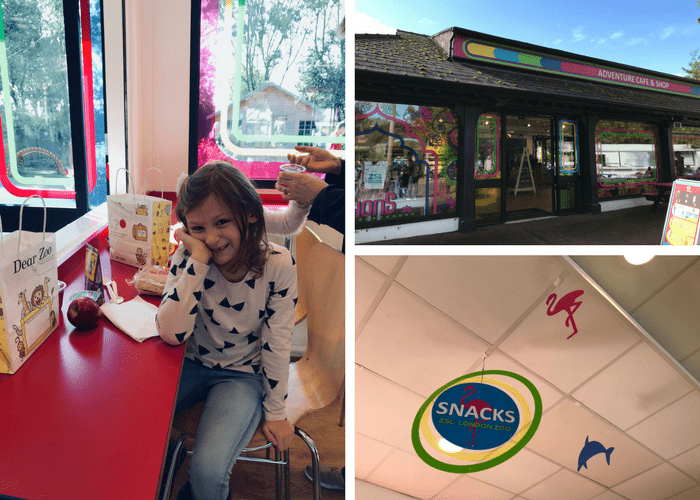 The girls were a little bit hungry after the goat visit so we decided to have a little break and have something to eat at the kid’s cafe near to where the goats were. We had some lunch there even though it was a little early. As you might expect, they had kid’s lunchboxes where you have to choose 5 products. So we did that and sat down to eat our meal. It was nice and peaceful there.

WONDERING AROUND THE ZOO 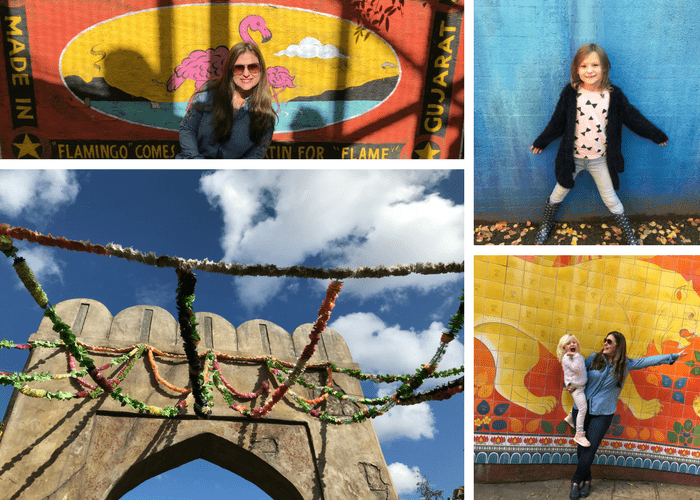 After our lunch, we all felt ready to explore again. So we walked around the zoo and took some lovely photos with nice backgrounds. I was impressed that I was able to find a few beautiful backgrounds, perfect for an IG photo! 😉 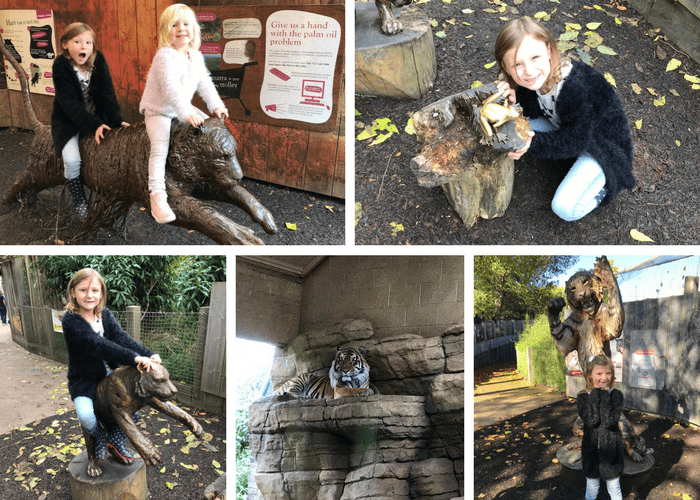 We also went to the tiger area which of course reminded us of Tigger! They had some lovely cubs last year and they are now looking so grown up. They are about 1 year old now and they are beautiful! We crossed over this area twice. The first time, we couldn’t spot any tigers but the second time around, we were able to spot them. There was a big tiger lying pretty much in front of us! The girls loved it! 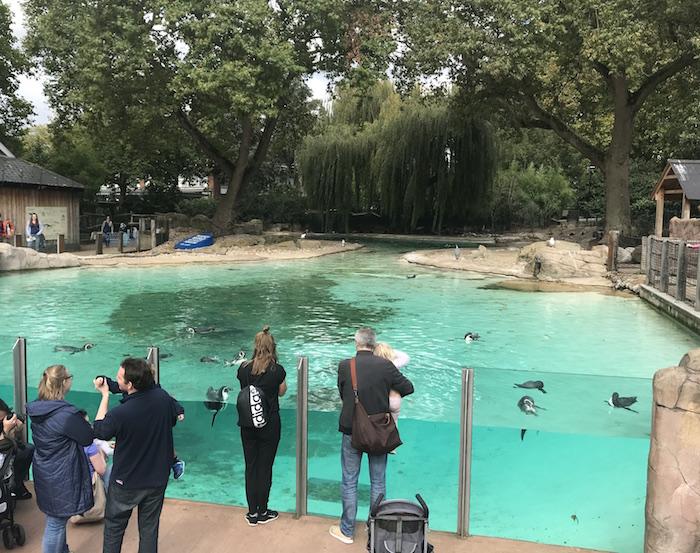 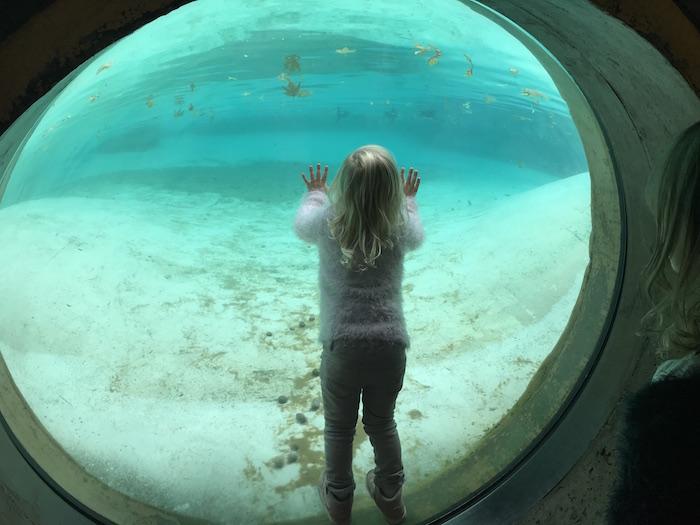 If you have seen the movie, you would have noticed that one of the many animals that Christopher Robin used to see when visiting London Zoo was the penguins! I’m not sure if you are familiar with London Zoo but they have an area where you can see the penguins underneath the water. It is a favourite picture spot and every time we go there we love taking some photos. This time we were even more enthusiastic about it because we remembered the scene in the film. If you fancy visiting the zoo, this is an area that you should visit for sure! 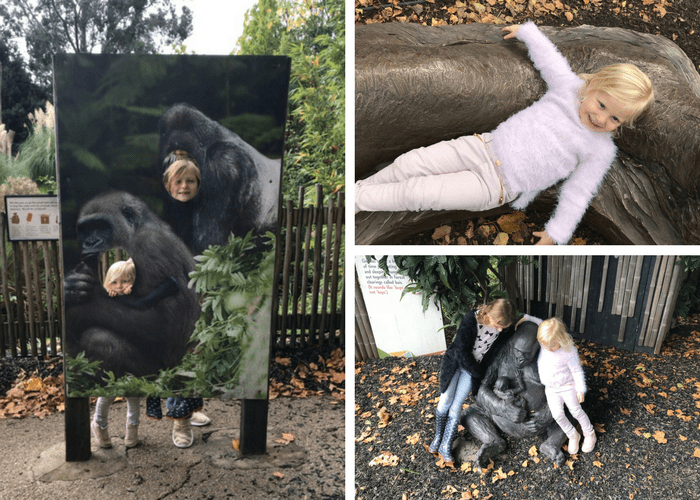 We also visited the gorillas! They are so big! Definitely very impressive! My girls really enjoyed this area too. They had so much fun taking photos!

We visited other areas too such as the butterfly dome, the reptiles area, etc but overall the areas I mentioned above were the ones we stayed longer at and the ones that were linked to the movie. We had a short private guided tour at the start of the day but then we were free to explore the zoo on our own. We had a lovely day and we loved visiting the areas that were shown in the film. Thank you so much, London Zoo for having us and also to the people of the film Goodbye Christopher Robin for organising such a lovely day for us!

If you have not seen the movie, please do as it is a lovely film showing the real story behind Winnie the Pooh! It will make you both laugh and cry! You can read my blog post about the premiere and movie HERE.

Have you seen the film? If so, what part did you like the most? Have you visited London Zoo before? If so, which area did you and your kids enjoy the most?

*Disclosure: We were invited to a private tour of London Zoo and we were then able to explore the place for the purpose of this blog post. However, all thoughts and opinions are my own.