Are you ready for some magic, spells and potions? If so, then let me tell you that we have the toy that will bring this magic to you! We received the most fantastic toy to review! It is the Magic Mixies from Moose Toys. It is absolutely amazing! This toy is sure to be a must have toy for Christmas 2021! 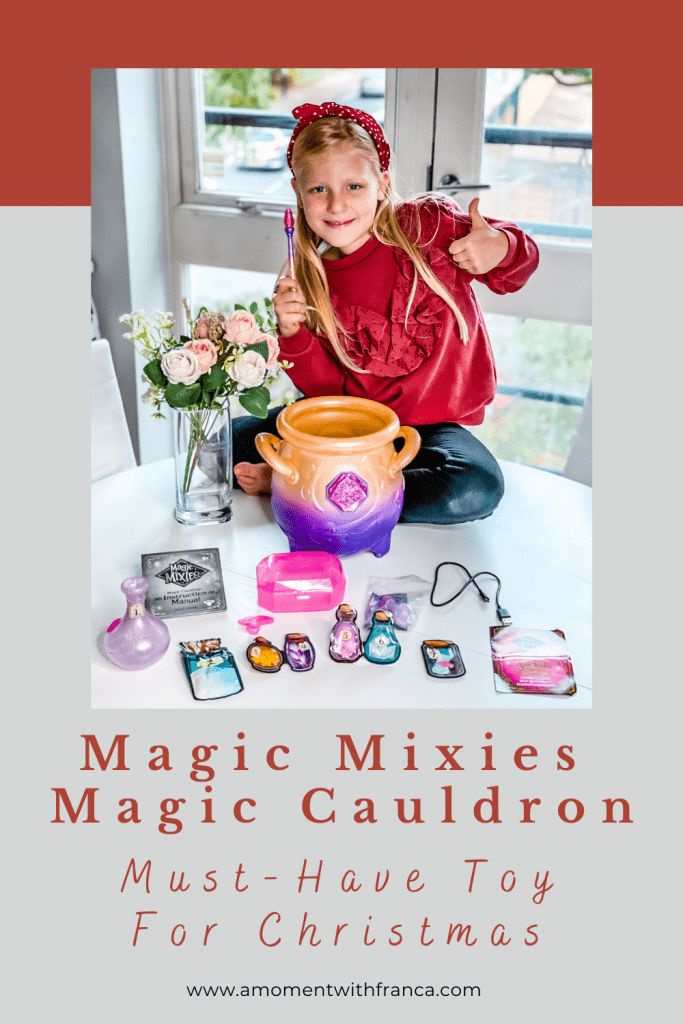 Ad-Gifted: We were given a Magic Mixies Magic Cauldron for the purpose of this review.

Magic Mixies Magic Cauldron combines spells, wand, mist, sounds, lights, magic, a surprise toy and so much more. I am telling you, this toy has everything you need to bring some magic alive and your kids would absolutely love it!

Magic Mixies Magic Cauldron lets kids make magical potions through cool spells that will then reveal their own furry pet friend living in its cauldron. This interactive experience will captivate your kids with its imaginative play!

And so the question now is: who will you magically create?

Inside the Magic Mixies Magic Cauldron you will find the following items: 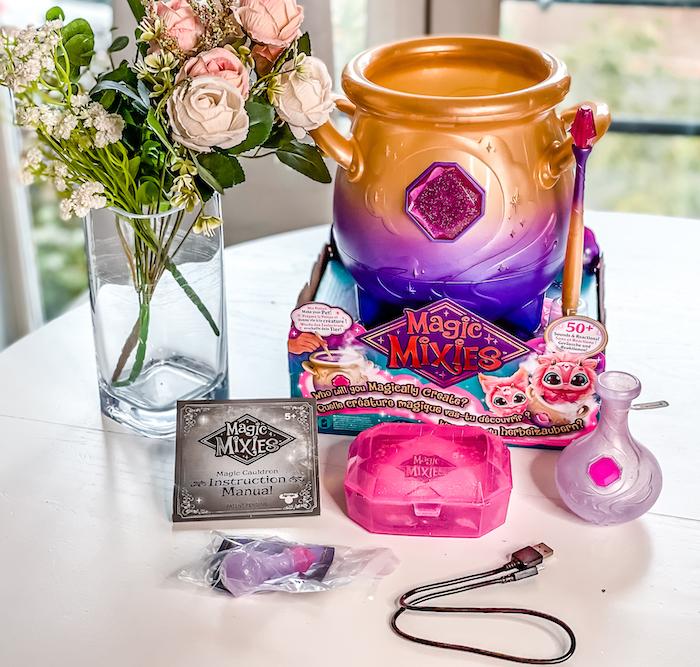 Inside the gem case, you will find the spell ingredients which are the ingredients that your kids will need in order to cast a spell. 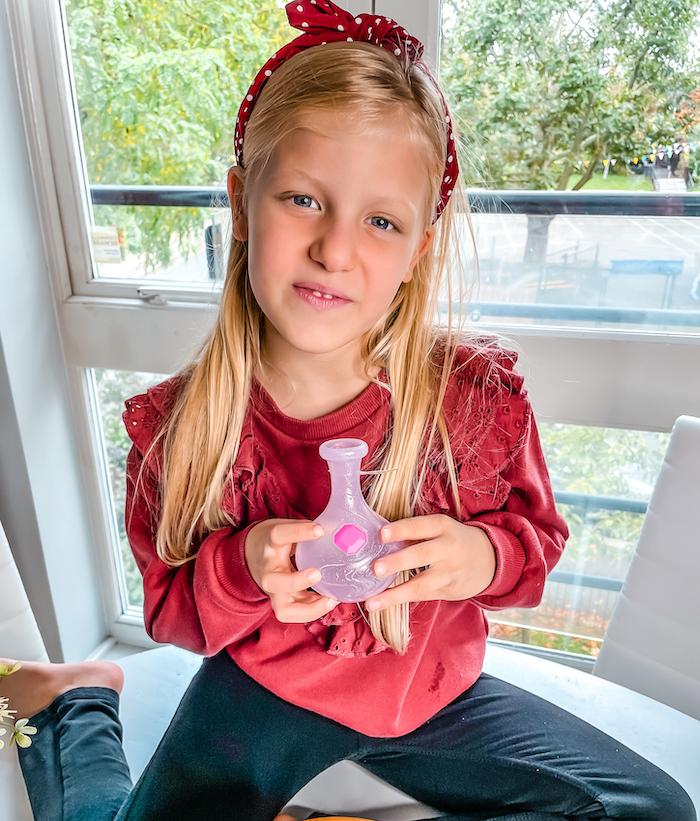 To be able to create a Magic Mixie, follow these steps: 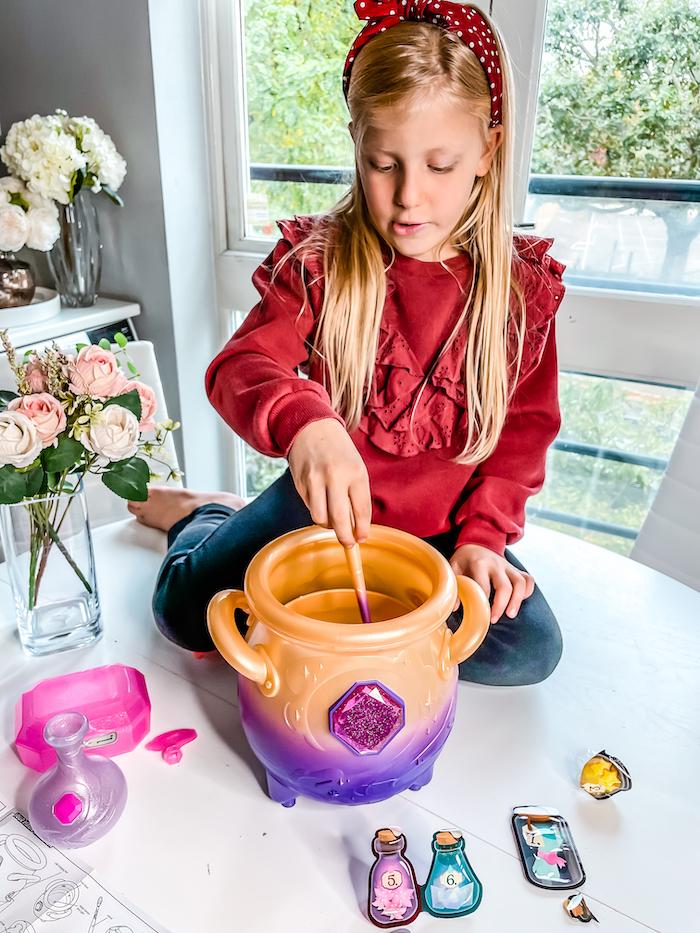 First, you read the spell from the Spell Book and start by adding water to the Magic Cauldron, then add all the 7 magical ingredients (Sound Dust to give your Mixie its voice, Glimmer Star, Magic Feather to give your Mixie wings, Fizz Flower to add some colour, Crystal Gem and give it a name by writing it on the Naming Scroll) one step at a time as each ingredient would help your Magic Mixie come to life. 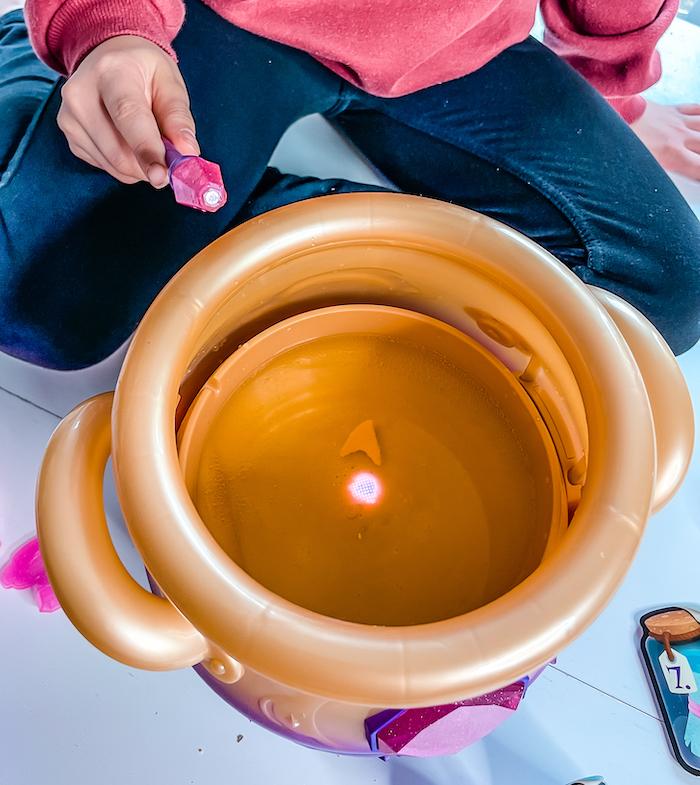 As you perform each step of the spell, the Magic Cauldron guides you with lights and sounds. When you drop each magic ingredient into the potion, they will foam and bubble and then you will hear a ‘Tap! Tap! Tap!’ coming from the Magic Cauldron which means that you should use your magic wand to tap 3 times on the rim. Then you will be able to move to the next step of the spell to create your Magic Mixie. 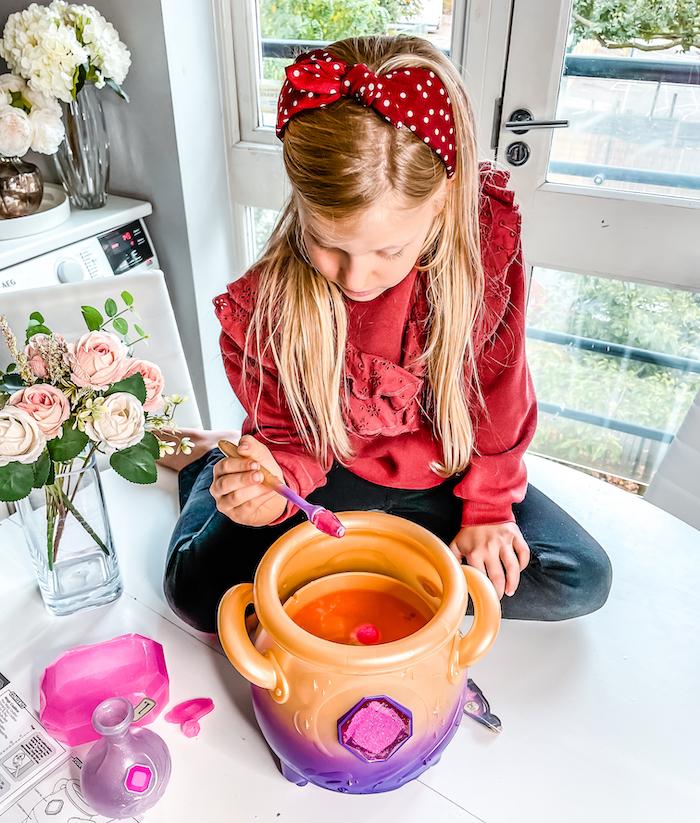 The last step would be to say the Magic Words ‘MAGICUS MIXUS‘ and then be prepared because you will be amazed!

One of Sienna’s favourite parts was pouring the magical ingredients and tapping the wand. She got so excited every time that she was able to hear the bubbles and then be able to move forward to the next step. I found it fascinating seeing all her reactions. 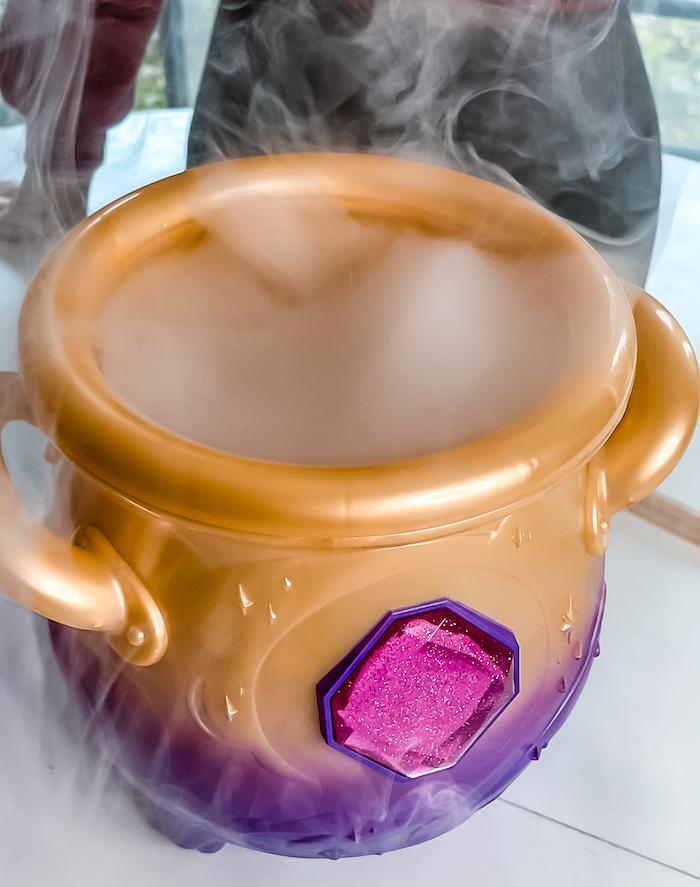 And this is the part that Sienna loved the most! The mist part!

We watched the magic happen right in front of our eyes! It was mesmerising! When Sienna finished her spell, real mist rose from the Magic Cauldron! Sienna was amazed! I must admit, I was amazed too! 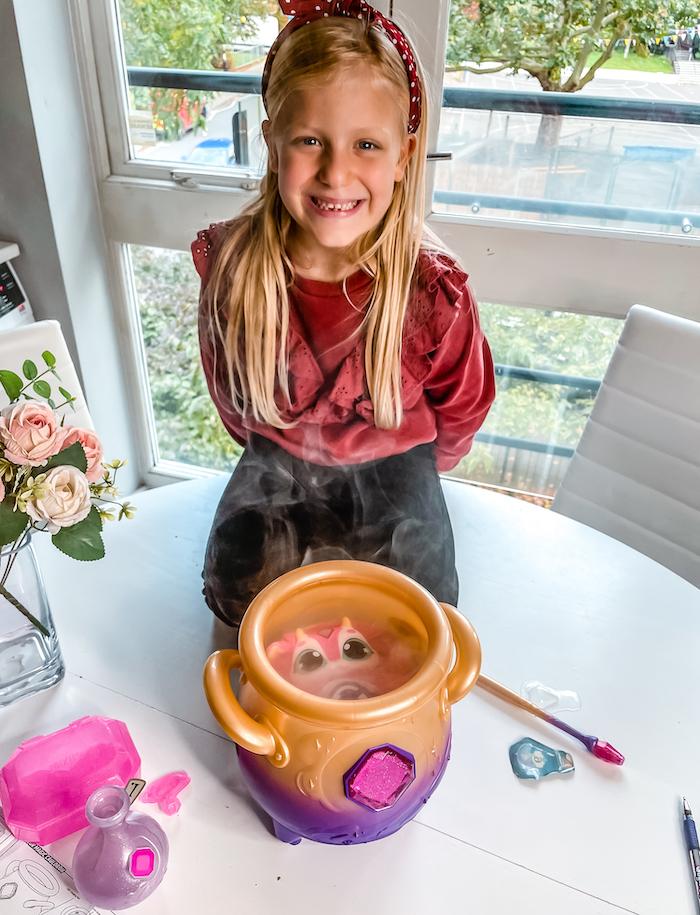 Something magical happened inside the cauldron and as soon as the mist disappeared a magical pet was revealed! It was so cool! Our cute Magic Mixie was a pink Pegasus feather that can fly and has sparkly eyes. Sienna was delighted! Sienna named her Lilly! So cute, isn’t it? 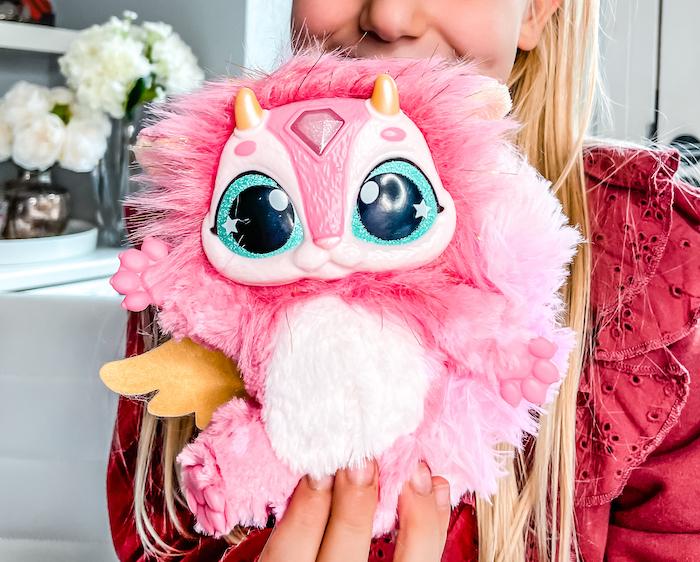 The Magic Mixie and their Magic Cauldron come with 50+ sounds and reactions.

The kids can use their wand to interact with their new magical pet friend by nurturing it and casting spells together. The more Magic Mixies are nurtured and cared for, the stronger their energy levels become. 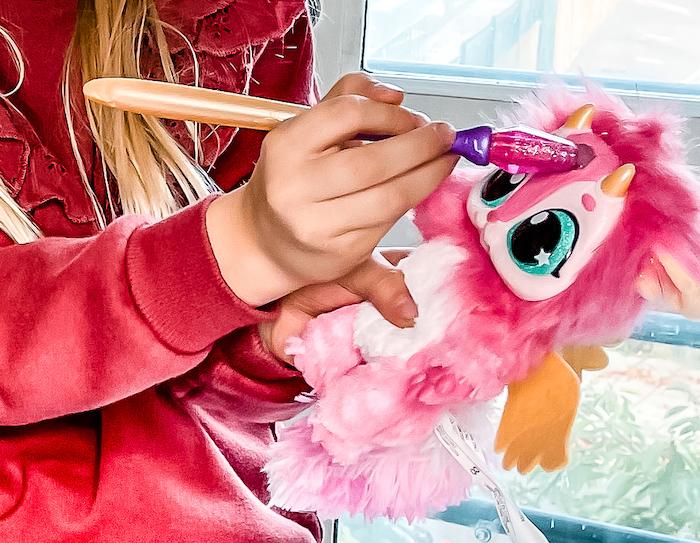 You kids can perform all sorts of magic with their Mixie! It has 3 different modes that can be activated with the wand.

Sienna loves her Magic Mixie, Lilly. She loves that Lilly responds to her touch and responds to the wand.

The Magic Mixies come in two different colours: pink and blue, so they can magically reveal to different species of Mixies. 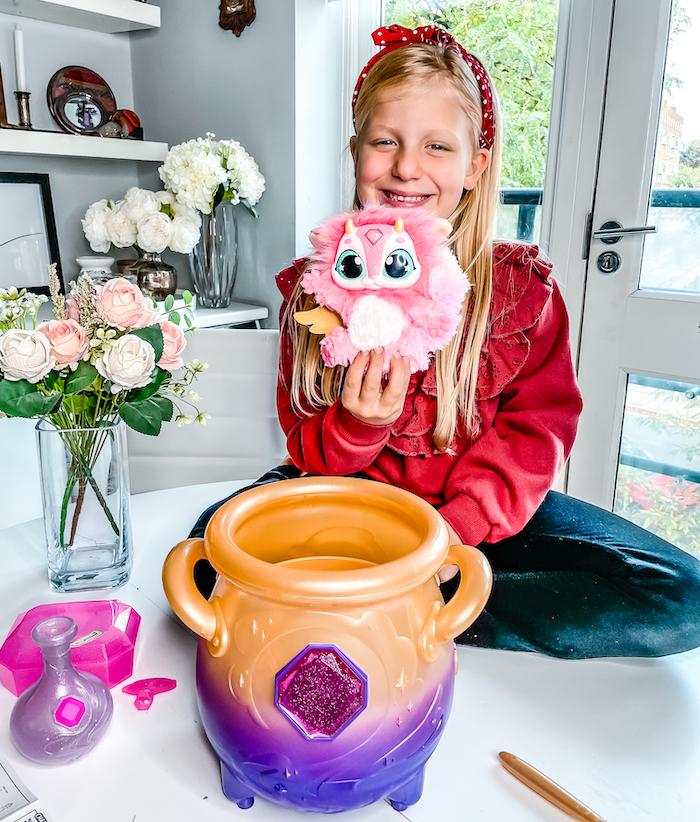 What we love the most about this toy is that you can repeat the process again and again! So this toy has longevity asyou can get refills to repeat the magic again!

Sienna loves the idea that her Magic Mixie can be reloaded back into the Cauldron, so she can repeat the spell for her friends!  Refill packs are available for £9.99 which will let your kids redo the magic mist reveals again and be able to perform new spells, this way the magic never ends! Hurrah! This refill will let them perform two new spells and 20 misting moments. 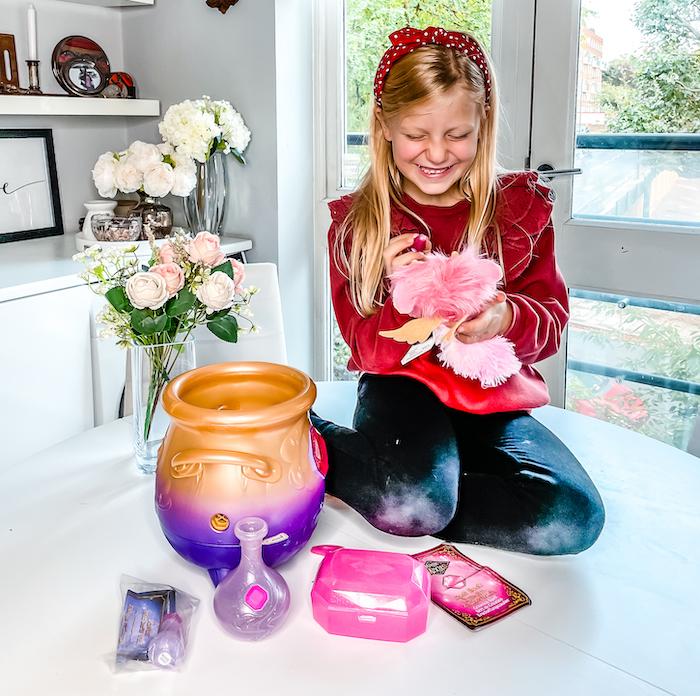 You can buy Magic Mixies Magic Cauldron for £69.99 from Argos, Smyths Toys and Amazon. I recommend you to be quick because I think this toy will be very hard to find for Christmas and I am sure you would like to have it in time. 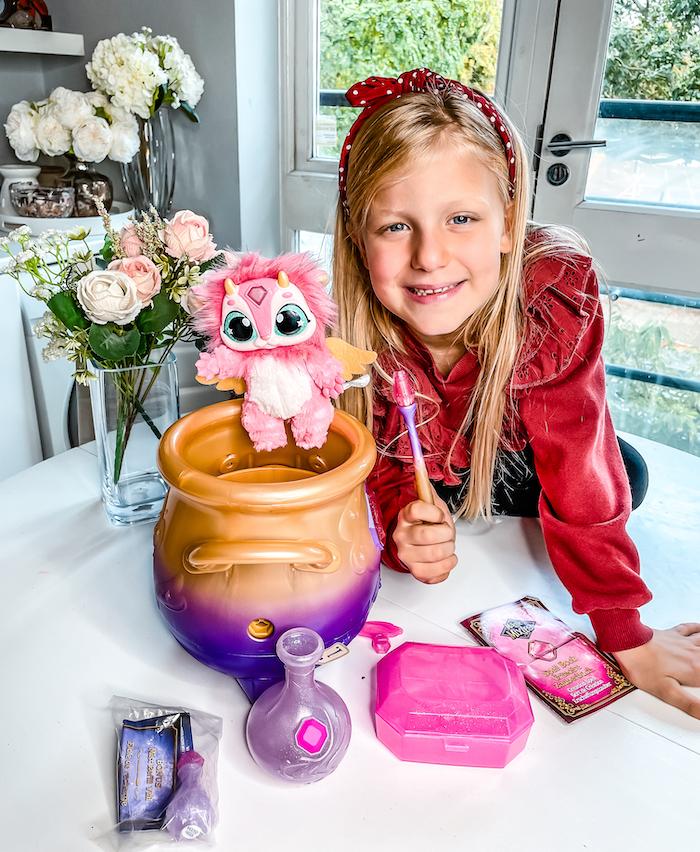 Sienna absolutely loves this toy! She plays with her Magic Mixie Lilly all the time and she can’t wait to show her friends how the Magic Cauldron works. Lilly is adorable, so soft and fluffy.

I must admit I was awed by it too and I thought it was an amazing toy. I love that it can be reused, so you really get value for money. The mist is fascinating!

Your kids are going to love this toy. Check out this Magic Mixie Reel of Sienna trying her Magic Cauldron for the first time! You definitely need to see this toy in action to understand how cool is it.

Is Magic Mixies Magic Cauldron on your kids’ Christmas list?

*Disclosure: We were given a Magic Mixies Magic Cauldron for the purpose of this review. However, all thoughts and opinions are my own. It contains affiliate links.