A week ago we went to Greenwich to visit the Royal Observatory kindly invited by Royal Museums Greenwich which is now reopen to the public for the first time since March. We haven’t visited the Royal Observatory before so we were very excited to explore it inside. We have been to Cutty Sark a couple of times and the girls loved it so much, so we were keen to visit another site that is part of the 4 sites of Royal Museums Greenwich. The other two are the Queen’s House and the National Maritime Museum. 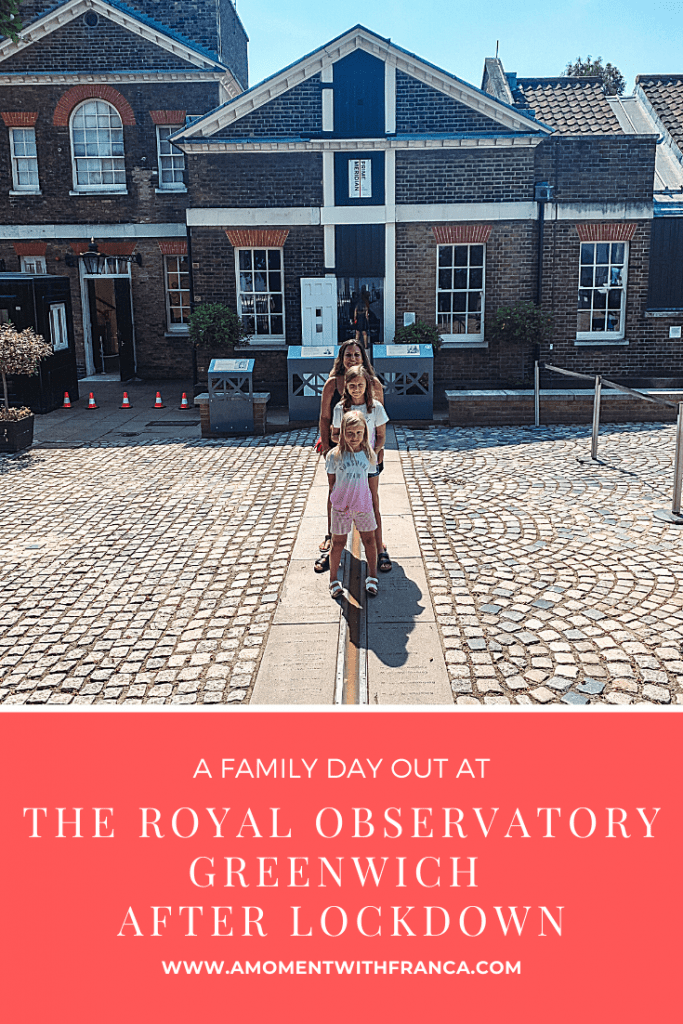 We went there driving as we are avoiding public transport if possible but you can get there by rail or river which takes no time at all. It is just 8 minutes from Central London by rail, 20 minutes by DLR, or you can make the journey part of the fun and arrive by boat.

Our journey took us less than an hour which was perfect. The weekend that we visited, the on site parking was not open yet so we parked nearby using an on-street pay-and-display parking bay a but now their parking is open during the weekends. I recommend checking the Royal Museums Greenwich website for any updates just in case. 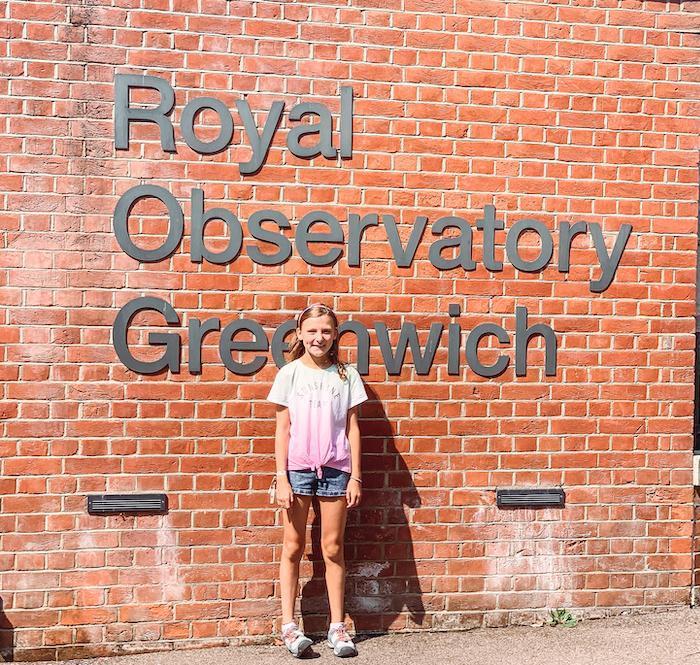 The Royal Observatory is right next to Greenwich Park. It took us about 5 minutes walk to get there from our car. It is a walk uphill but it wasn’t difficult to do, actually, it was a pleasant walk. You will see several signs that show you where the Royal Observatory is which was handy. As soon as you get to the top of the hill you will love it! The views of Greenwich as well as London are stunning. 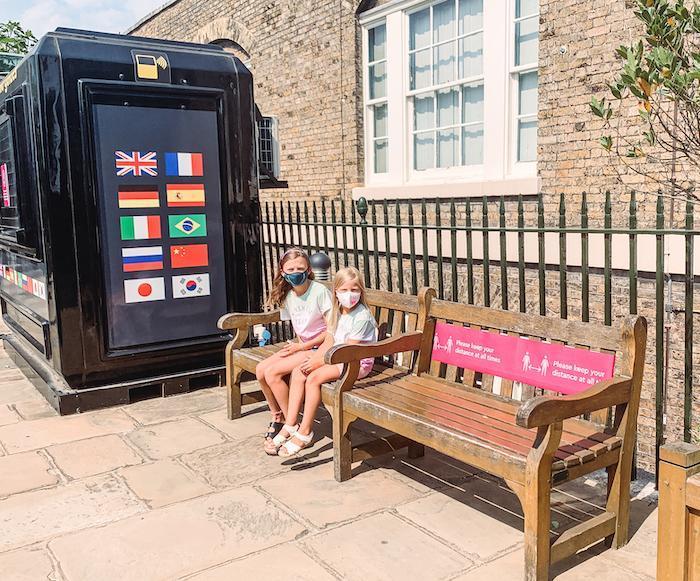 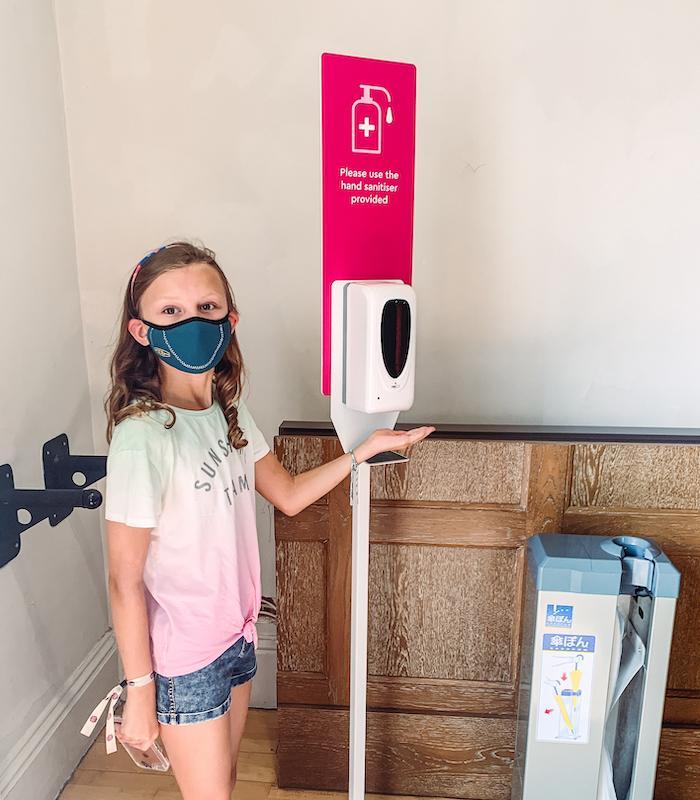 We were asked to wear a face-covering when we were inside. However, you don’t have to wear them outside within the grounds of the building but we did have them on most of the time unless we were taking photos.

We saw lots of safety signs reminding us to keep our distance with others as well as a one-way system in place throughout their site. There were also plenty of hand sanitisers available throughout, especially next to any interactive display. We also notice that their audio guides are temporarily suspended. 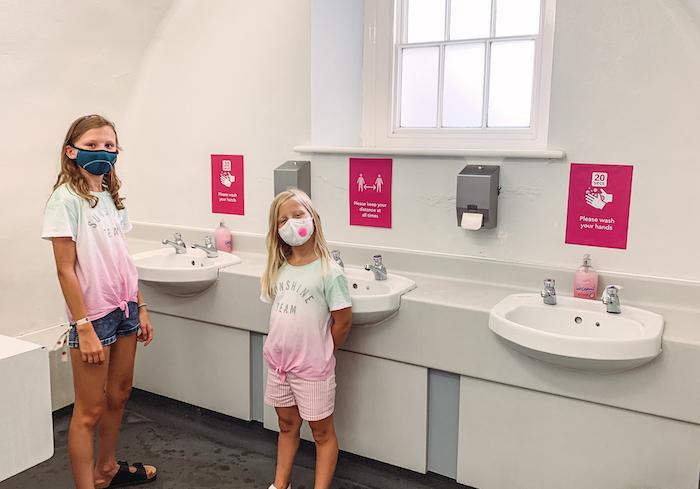 You can access their toilets next to the courtyard. They are very clean and also have social distancing signs.

Please note that at the moment, 2 attractions are currently closed due to Covid19 which are the Camera Obscura and the Planetarium. If you need more information on their social distancing measures, please visit the Royal Museums Greenwich Website.

Home of Greenwich Mean Time (GMT) and the Prime Meridian of the world, the Royal Observatory holds remarkable stories and historic significance for the area on an international scale. There is plenty of outdoor space on site in the courtyard to stand on the Prime Meridian and visitors can also explore Flamsteed House, home to Britain’s Astronomers Royal.

Things To Do At The Royal Observatory 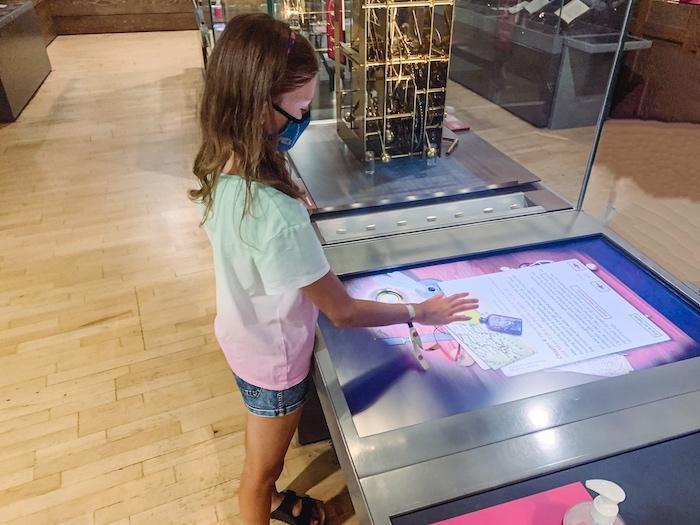 In this area, you will discover John Harrison’s iconic marine timekeepers. The Harrison clocks were revolutionary in their ability to allow ships to determine their longitude at sea. This development drastically reduced the risk of ships and their crews, along with their precious cargoes, being lost at sea. The Harrison clocks were able to keep time at sea, allowing sailors and mariners to determine their longitude. 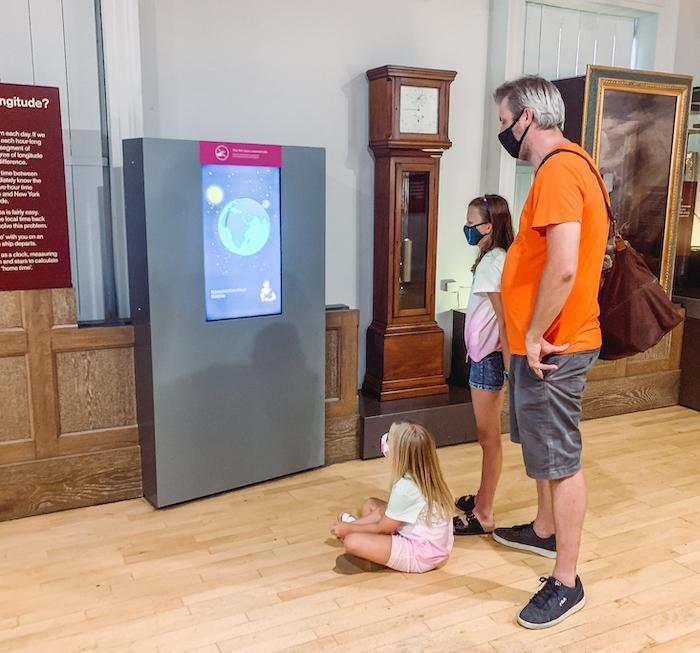 They have some interactive displays of scientific objects, paintings and animations in this gallery which were very fun for the girls. Learning more about time, navigation and longitude was fascinating for all of us. 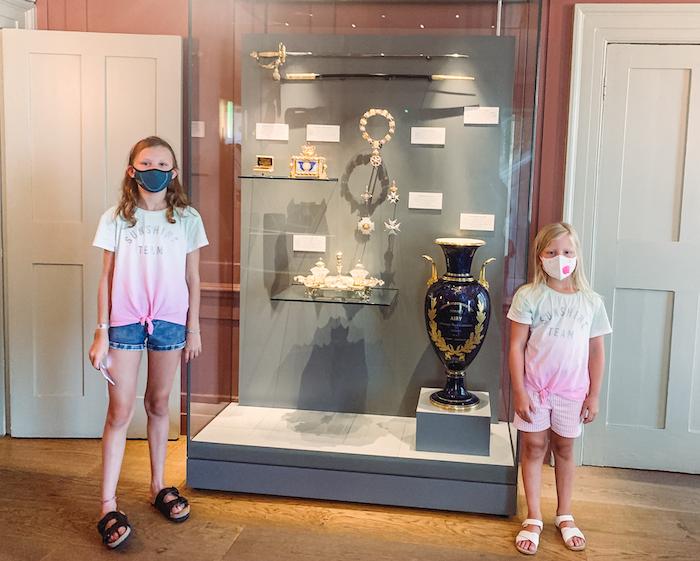 Here you will explore where the Astronomers Royals lived and worked, as well as all about the families that supported them in the 18th and 19th centuries.

Flamsteed House, named after the first Astronomer Royal, John Flamsteed, was an official residence for nearly three centuries. Ten Astronomers Royal and their families called it home. It was designed by Christopher Wren and Robert Hooke in 1675, the building was later extended to accommodate the needs of two particular families: the Maskelynes and the Airys. 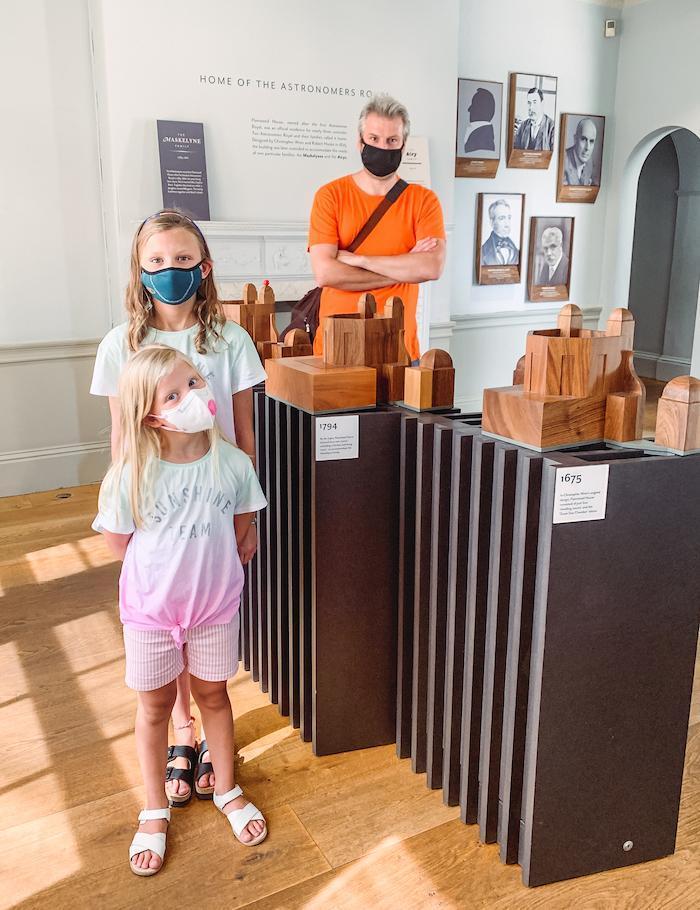 This room was designed by Christopher Wren and here the Astronomer Royal were able to do their work doing their observations using their windows which were very impressive.

Take A Look To The Historic Time Ball 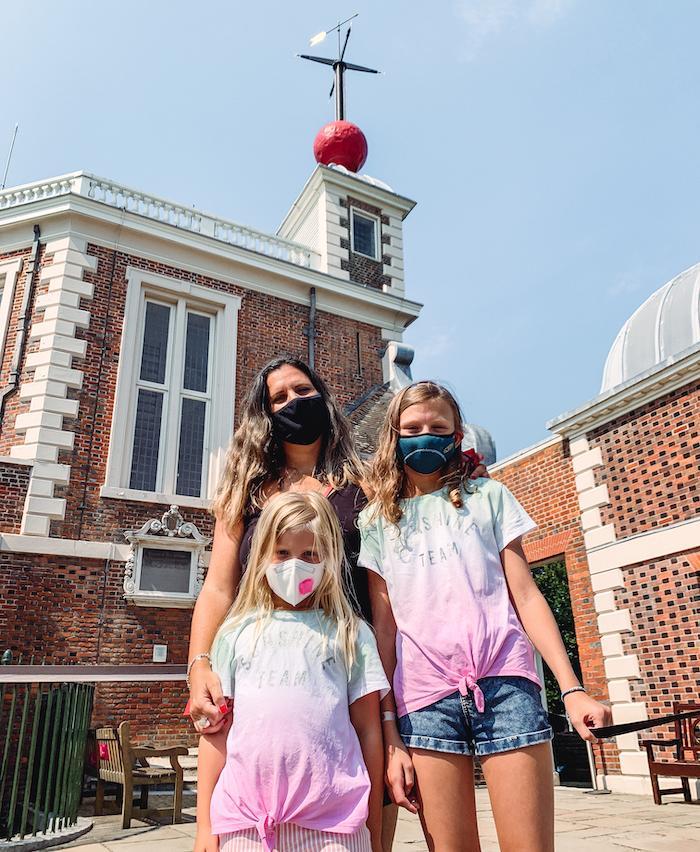 This is something very interesting that I didn’t know about. If you look carefully at the red ball around 1 pm every day, it will drop! This was incredibly useful for people navigating around that time as it was a time signal for them, so the ships were able to set their clocks.

As the time-ball drops, the air is compressed in a cylinder below to cushion its descent to the base of the mast. Amazing right?

So next time that you are in Greenwich, remember to check out the red ball!

Stand on the Prime Meridian Line 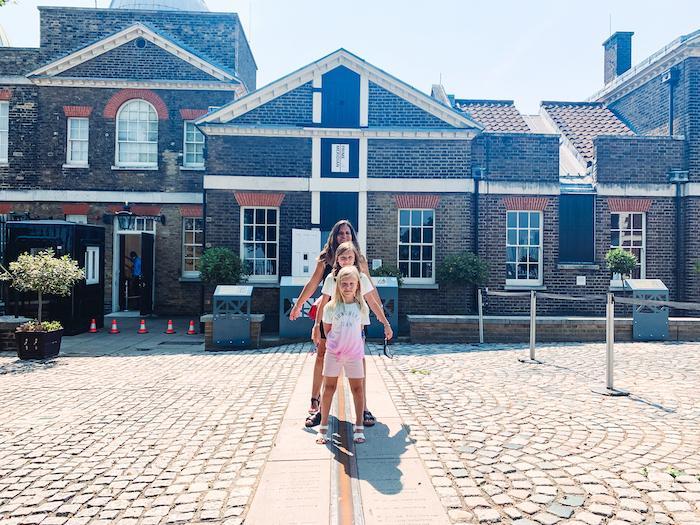 Since the late 19th century, the Prime Meridian at Greenwich has divided the eastern and western hemispheres of the earth – just as the equator divides the northern and southern hemispheres. In 1884 the Prime Meridian was defined by Transit Circle telescope at the Royal Observatory which was built by Sir George Biddell Airy, the 7th Astronomer Royal, in 1850. The cross-hairs in the eyepiece of the telescope precisely defined Longitude 0° for the world.

This was for sure the highlight of our visit. It was really cool to stand with one foot on the right and the other on the left meeting the east and west at the same time! 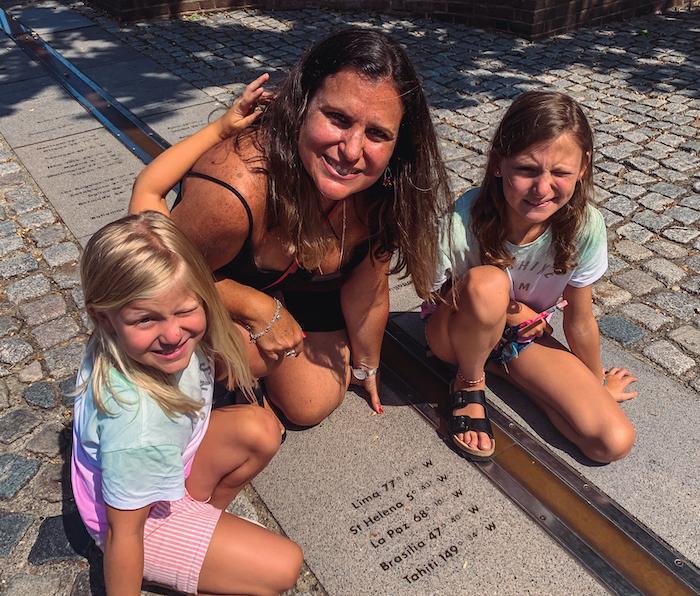 We took a photo showing Lima

There is a green laser which marks the Meridian Line in the evening sky from the top of the hill in Greenwich Park towards the London Skyline. This would be really exciting to see it too!

This part of the Royal Observatory is normally the busiest one but when we were there it was quiet and everybody was following the social distancing measures which were good to see. We were able to take lots of photos.

Here we saw the telescope that determined the exact location of the Prime Meridian. It was fun to walk around this area. 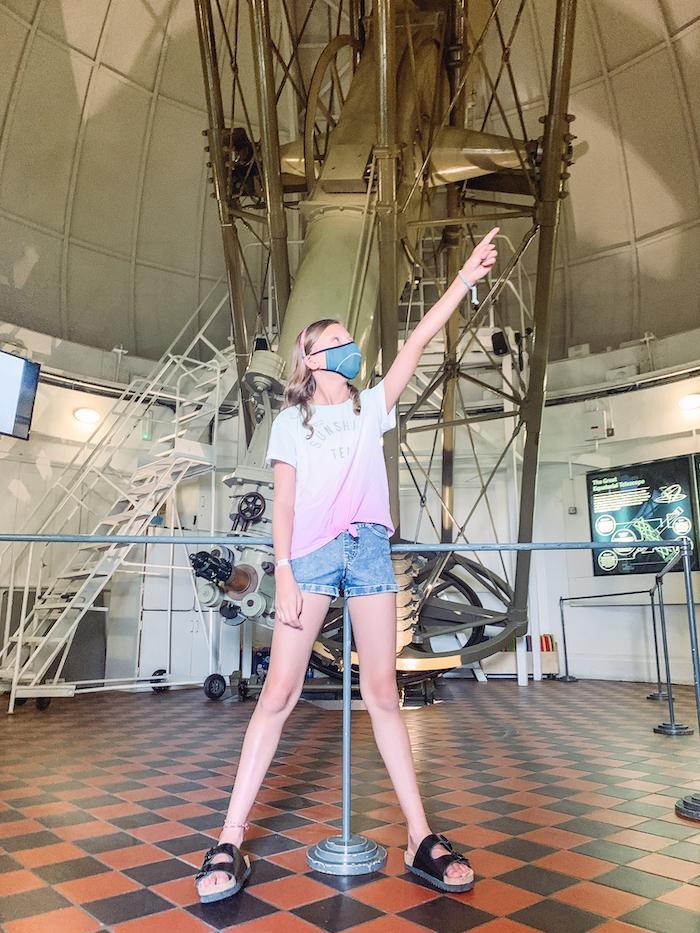 We also saw the Great Equatorial Telescope – it was massive! Very impressive. It is one of the biggest telescopes in the world.

It was built to research double star systems and remained in use until the late 1960’s. With the recent addition of a computer-aided guidance system and CCD camera, it continues to work as an excellent visual aid to observing the night sky. 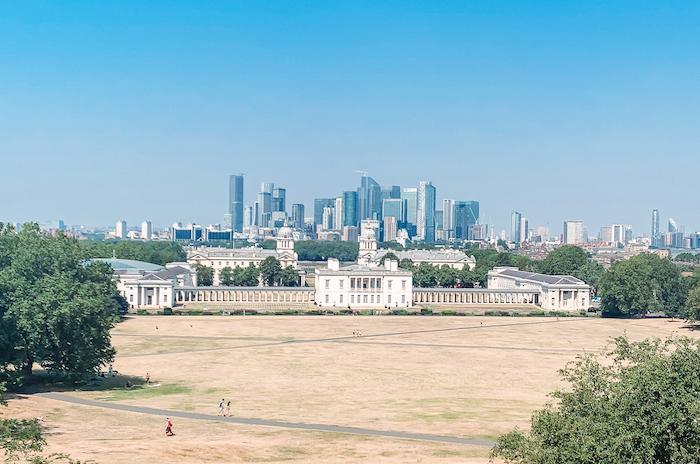 Another highlight of visiting the Royal Observatory is the view of Greenwich and the City. You can see clearly the Queen’s House which is so pretty.

Keep an eye out for the London Eye and St. Paul’s Cathedral too. Take in the fresh air as a UNESCO heritage site rolls out in front of you! 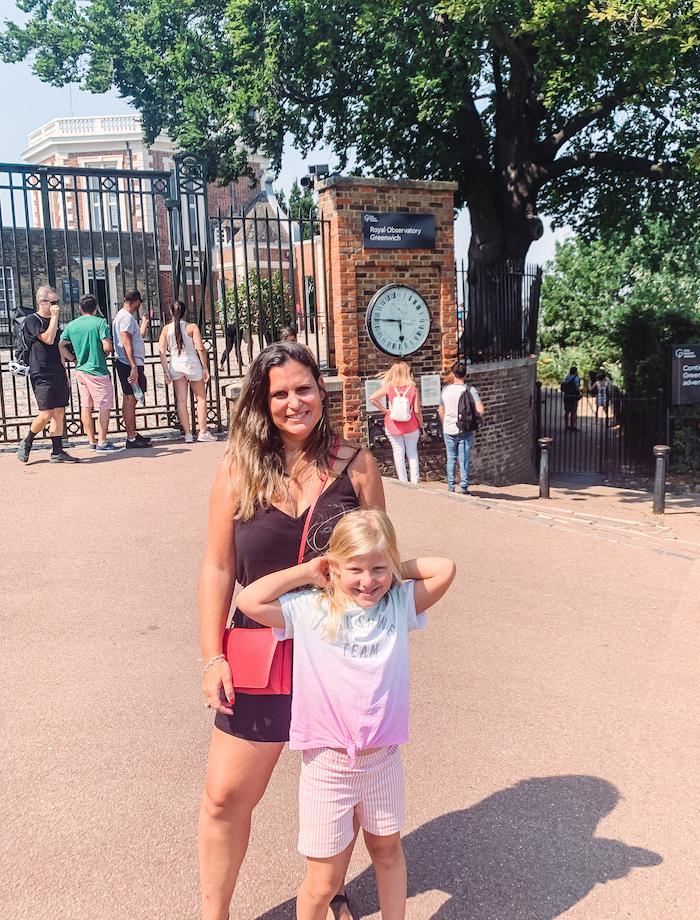 We also took a photo in front of the Shepherd Gate Clock which is outside of the Royal Observatory. This clock is the first to ever show Greenwich Mean Time (GMT) to the public.

It was really interesting to learn all about time and space as well as exploring Flamsteed House at the Royal Observatory. Definitely, one of the highlights of our visit was the opportunity to stand on the Prime Meridian of the World which was super cool!

We had a lovely family day out. Royal Museums Greenwich has the perfect sites to safely visit and explore after lockdown. We really enjoyed escaping for a day out in the fresh air while exploring their inspiring site. 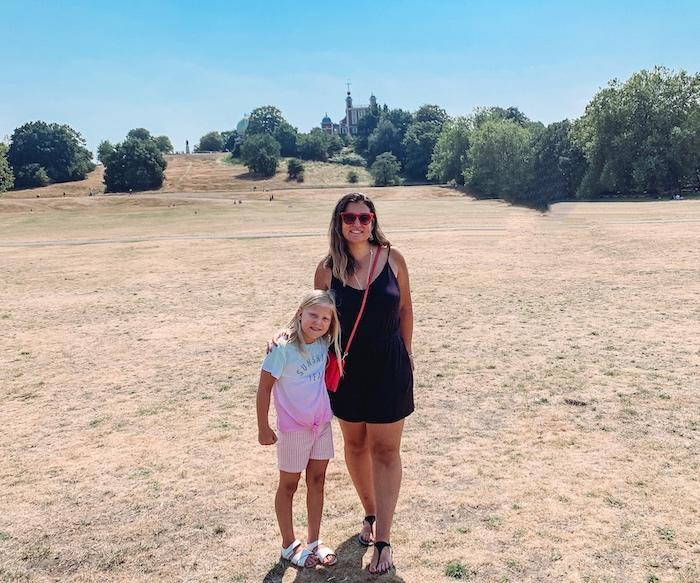 *Disclosure: We were invited by Royal Museums Greenwich to visit the Royal Observatory for the purpose of this review post. This is a sponsored post and therefore we have been compensated. However, all thoughts and opinions are my own.