Not long ago we were invited to the Gala performance of Bing Live at the Alban Arena in St Albans. I went with little Sienna who is a big fan of Bing. It was funny because the previous month she had been so obsessed with this programme wanting to watch it all the time. So I knew it would be a special day for her. 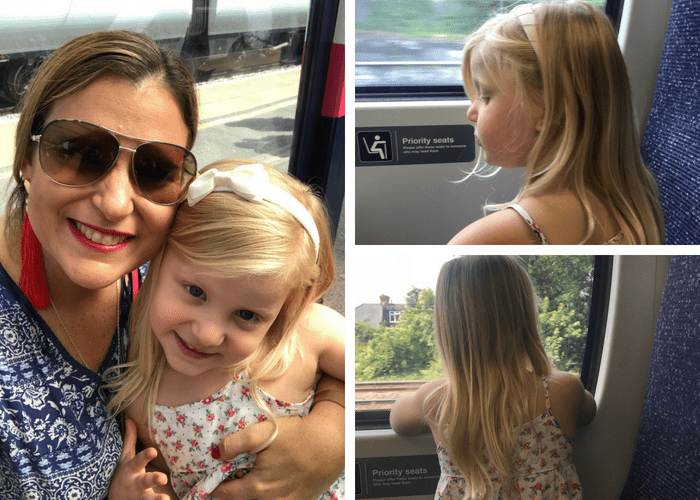 We travelled by train using the Thameslink Railway from West Hampstead station. Sienna was super excited! She didn’t stop talking about meeting Bing and watching the show.

It must be amazing for a 3-year-old to be able to watch a live action show and meet the main character in person from a show that she watches every day! She couldn’t stop smiling the whole journey, bless her! 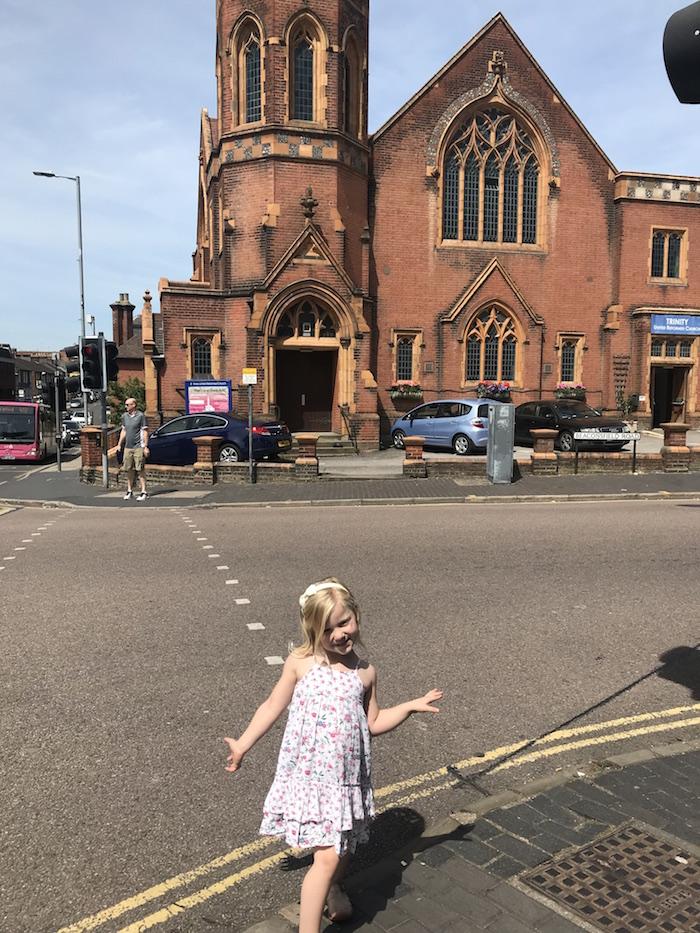 We arrived in St Albans super early. I was actually glad we did because walking from the station to the theatre took longer than I thought because I was in heels and with Sienna of course (who wanted to stop in every corner… she is so curious, LOL!). 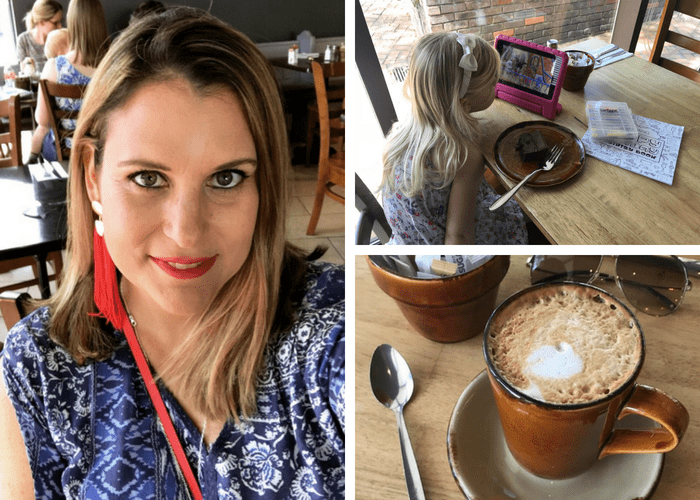 When we arrived at the Theatre we saw all the Bing signs so Sienna got even more excited but because we were about 45 minutes early we decided to go to the cafe next door for a bit. Sienna had a super tasty vegan chocolate cake and I had a lovely cappuccino.

Time to go into the Theatre 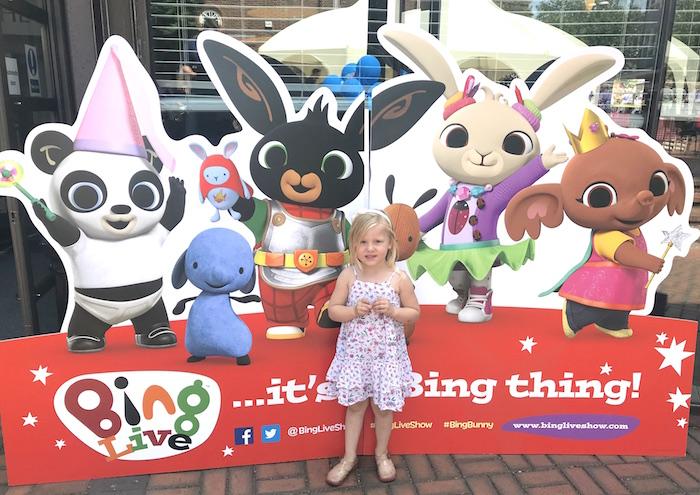 We finished our cake and coffee and then we went to the theatre. They had a cute Bing sign outside the theatre so I took a photo of Sienna in front of it.

Everybody was starting to queue to get in so we were lucky we got in early. Because this was a Gala, they had invited a few celebrities. I really didn’t know who they were as I didn’t recognise any faces but I could see some people being interviewed. 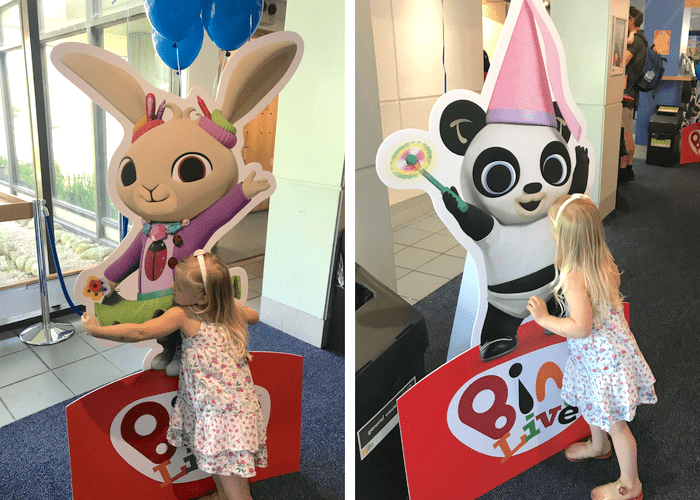 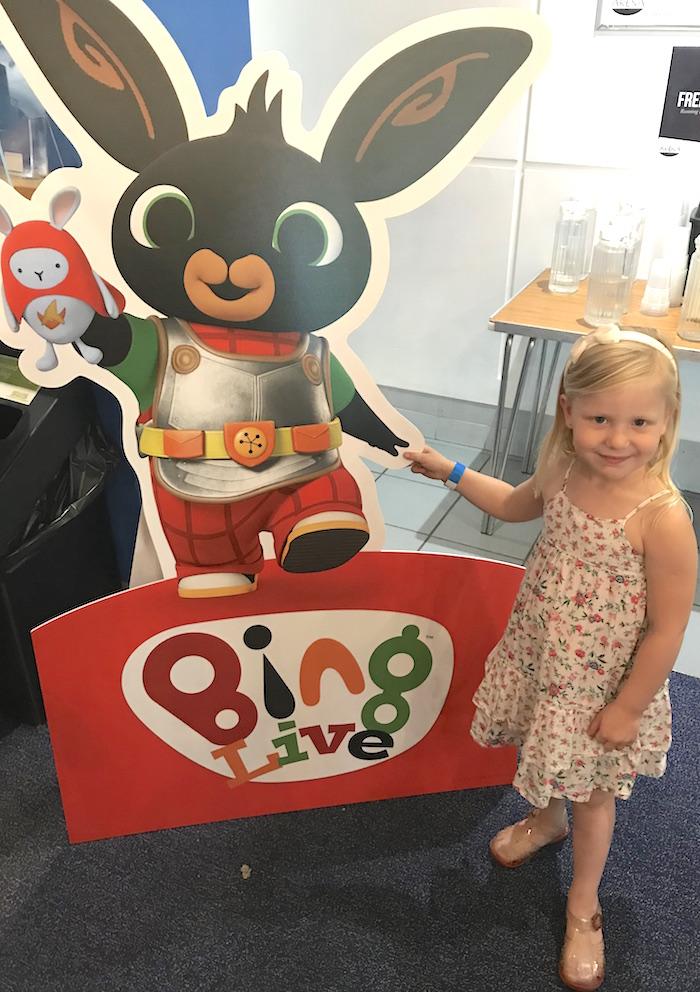 Before we got in to find our seats, we stopped to take photos of Sienna with each character. They had cardboard cutouts of them, so Sienna was very determined to get a photo with all and she didn’t want to miss any!

She was kissing them, hugging, having a chat with each of them. Telling me how excited she was to have photos taken with them. It was hilarious! I love her so much! 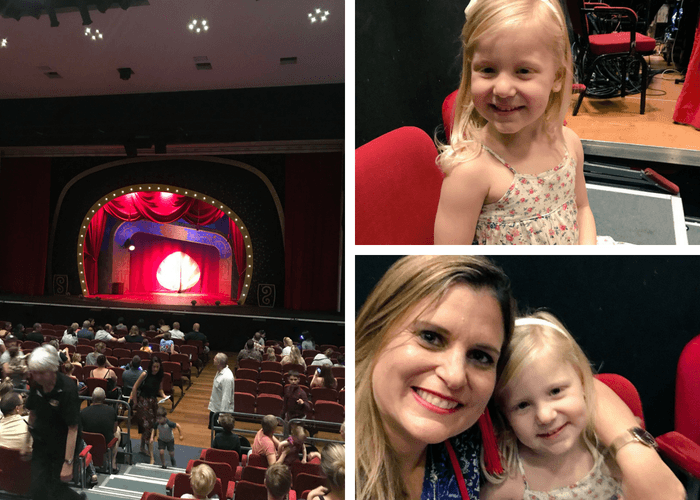 We then went into the theatre and looked for our seats. We were actually at the last row to the right-hand side, next to the sound box. There was a man controlling all the background music. I thought it might be a bit far for us, especially for Sienna, but when we sat down the view was perfect! We were able to see very well.

For those of you that have not heard of Bing, it is a CBeebies show that is super popular in the UK. Bing live brings the show to life in a brand-new stage production full of fun, laughter, music and magical puppetry. Bing Live is the perfect first theatre trip for pre-schoolers and families.

Bing Live is going on tour and this Gala was the first show. They will be touring during all 2018 and part of 2019. You can check all the places that they will be visiting HERE. Kids are loving the idea of watching all the characters from the show in person. So we have Bing, Sula, Coco and Pando as they learn how to tell stories by pretending, dressing-up and singing songs. And then Flop and Amma are there to help, but in this magical world of make-believe, things don’t always go according to plan.

Since its launch on CBeebies, Bing has been a ratings hit and it’s the number one top-rated pre-school show on BBC iPlayer. The series has won an International Emmy Award in the Kids’ Pre-School category in 2016, a Writer’s Guild Award and a BAFTA nomination for Best Pre-School Series. The animated series, which saw Mark Rylance make his children’s television debut voicing Flop, is produced by Acamar Films. 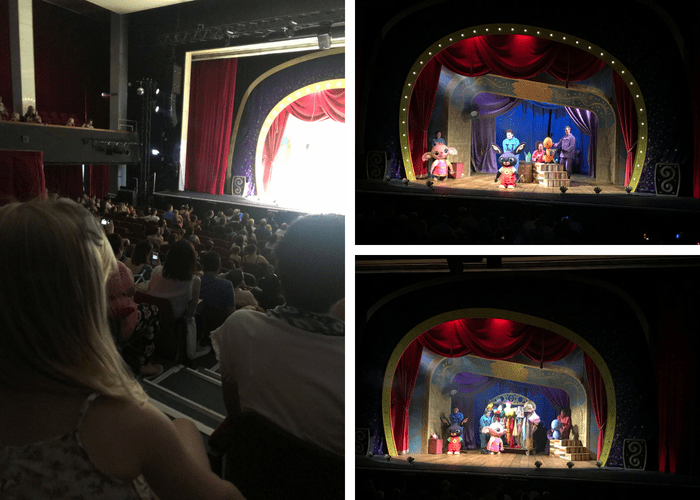 As soon as the show started, Sienna was over the moon to see all her favourite characters in front of her. She was very engaged in the show! There were so many little ones shouting Bing and screaming with excitement and happiness! You could see so many little faces full of joy!

The show has a similar style to In the Night Garden, so if you have seen that show live too, you will have an idea of what to expect from Bing Live. During the interval, Sienna and I went to get some ice-creams. It has become a tradition for us to get ice-cream every time we go to a show. Bella also loves having one when we go to the West End. 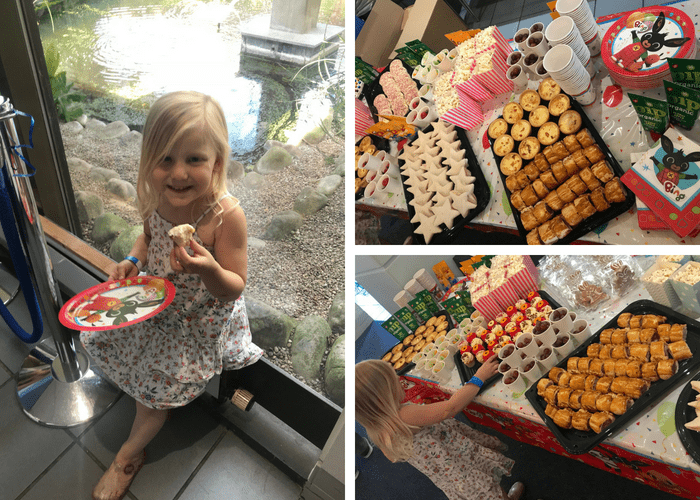 After the show, we were invited to a lovely Bingsters Party. Everything was decorated with a Bing theme, of course, and they had everything you can imagine for little tasters such as popcorn, jelly, sandwiches, marshmallows, drinks, sweets, etc! It was great. 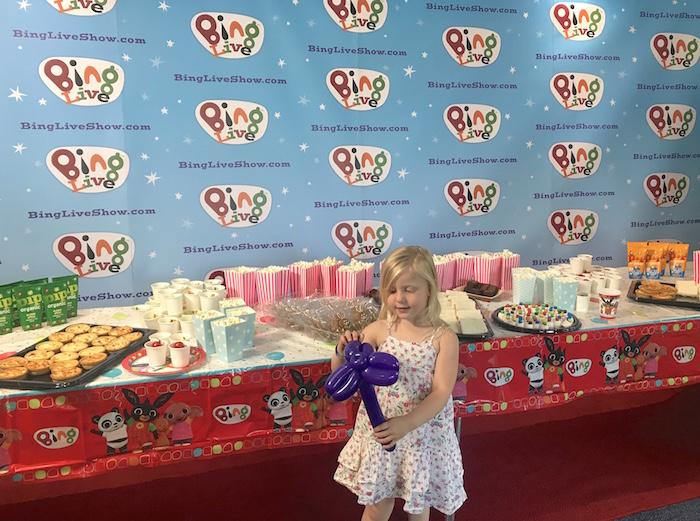 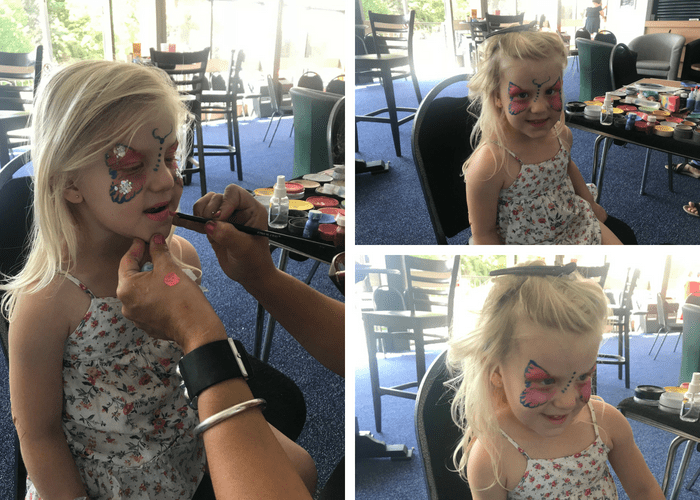 There was also someone inflating balloons so of course, Sienna wanted one. Then we went upstairs to see what else they had and they were doing some face painting. Sienna loves face painting so we did that straight away. The lady did the most gorgeous butterfly around her eyes. Sienna looked so pretty!

After the party, Sienna and I headed back home. Before we left, we were given a cute goody bag. Sienna was desperate to tell her dad and her sister about her amazing adventure for the day! 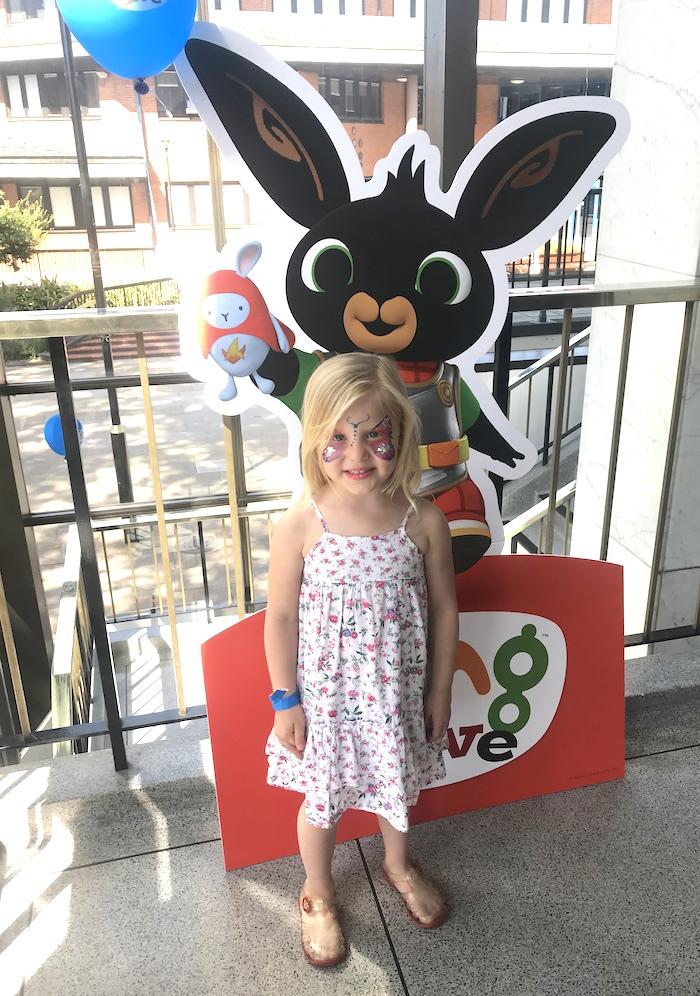 We really enjoyed this show. Sienna was super excited and she had the best time ever. The show is very good, the way that they worked with the puppets is amazing. All the kids were very engaged and having a fantastic time. It is a really fun show not only for the little ones but for the whole family. I would definitely recommend this show, so please, go and check if they will be visiting your area!

Do you have a Bingster at home? Do your kids love watching this TV show? Have you seen Bing Live? Will you be taking your little ones to watch the live show?

*Disclosure: We were invited to the Gala performance of Bing Live in St Albans for the purpose of this blog post. However, all thoughts and opinions are my own.