A couple of weeks ago we were invited to a super cute event. It was perfect for my girls because they love ponies and especially for Bella who loves animals! I was so excited for them. Since I mentioned spending the day at stables in Burgess Hill, they couldn’t stop talking about it! Bless them! 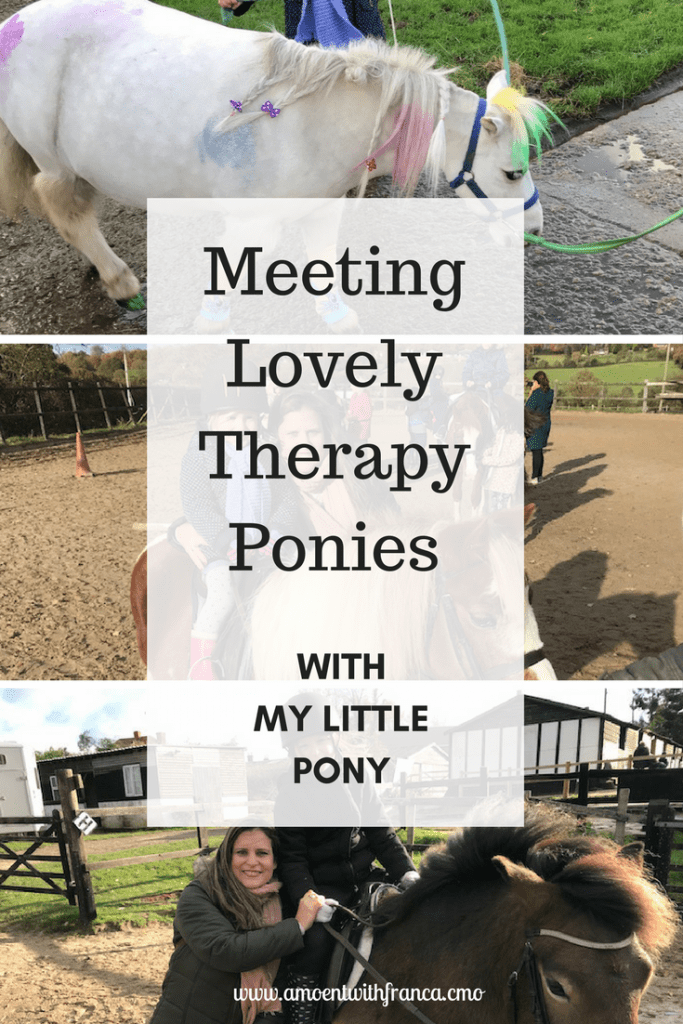 Just the day before the event, Bella went to a pony riding birthday party, so she had the most amazing weekend riding ponies! It was quite a coincidence for her that the event and party were on the same weekend! What a lucky girl! This was actually very helpful because, on the day of the event, she was very relaxed being around the ponies and felt much more used to them! 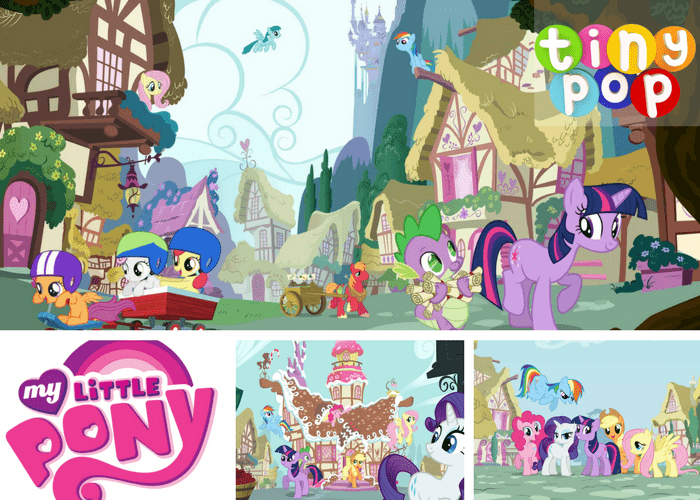 The event was organised by Tiny Pop who show the My Little Pony series on their channel. After the successful My Little Pony The Movie, kids will be eager to watch more from these lovable ponies, so they can catch up with their TV series at 8 am and 4.30pm every day on Tiny Pop! Tiny Pop is available on Freeview 207, Sky 167, Virgin 737 and Freesat 605.

ARRIVING AT THE STABLES 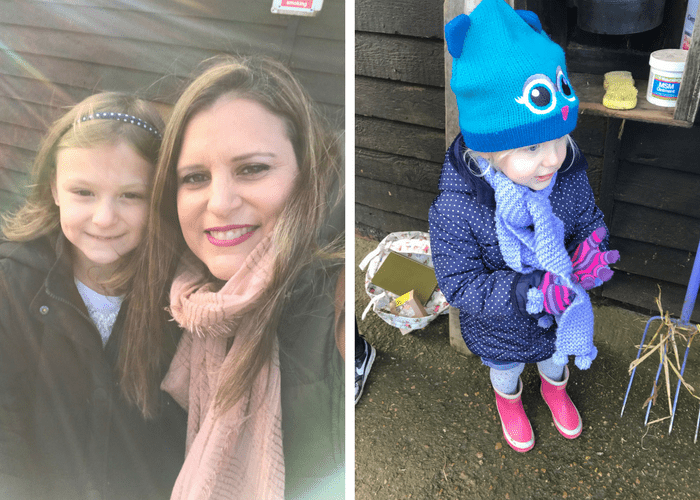 We travelled to Burgess Hill by car which was about 1.5 hrs from London. The event was at Hill Crest Farm where we would be meeting some Therapy Ponies from KL Pony Therapy. We were going to learn about what they can do and how they can help both children and adults who struggle with a wide range of issues.

Pony therapy is growing in popularity and is used to help promote good physical and mental health in children and adults alike. There was a meet and greet and introduction to the therapy ponies/riding ponies and a safety talk (all staff are fully insured and CRB checked) before we were split into 2 groups. KL Pony Therapy explained how they started their business and the benefits that pony therapy has on children and adults and the positive results they’ve seen.

Unfortunately, we arrived a little late so we missed this moment, so my girls went straight to the first session which was Pony Grooming. 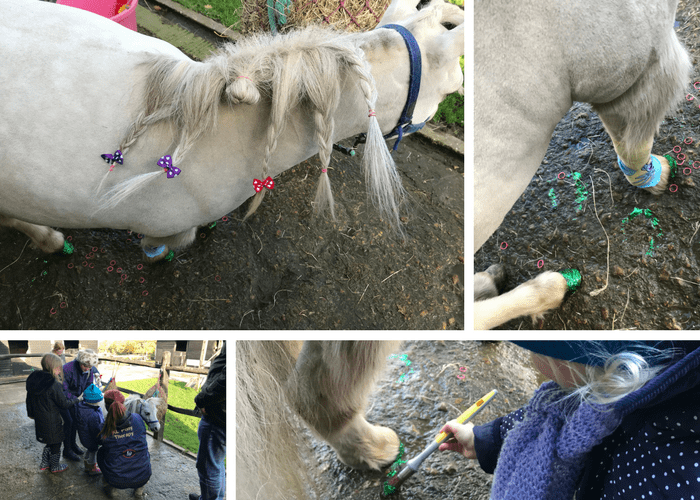 The pony grooming session was lovely! There were 3 mini therapy ponies which the girls learned how to lead groom, pamper and to also glitter them. You can tell the ponies very much enjoyed being pampered in this way. The good thing is that everything is safe and it is also animal rights approved. 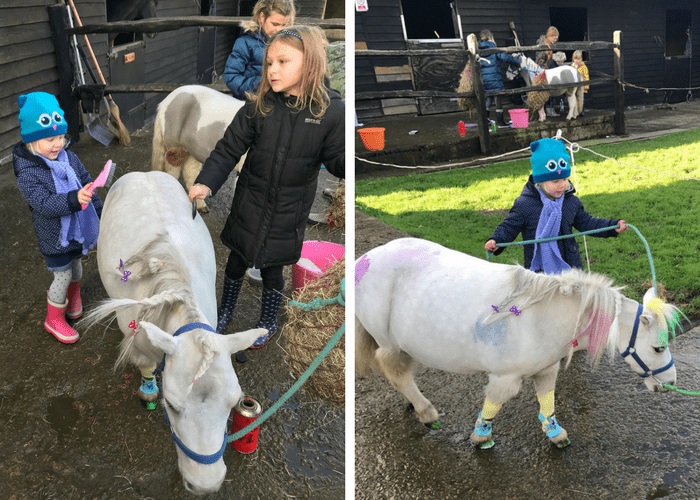 They combed their manes and learned all the basics of looking after a real Pony. It was really nice to see. They were very excited! 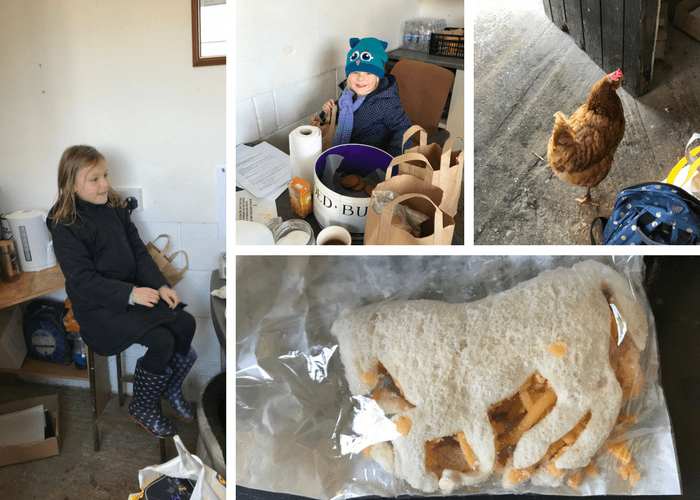 After the grooming session the girls were hungry, so we ate some sandwiches they had provided in the stables office. Thete was a lunch bag each and also some biscuits to try. They sandwiches were actually pony shaped! I thought that was very cute. My girls loved that!

It was fun when we were eating our lunch because we even had a cute chicken wandering  around! We really felt like we were on a farm in the countryside which was fantastic! 🙂 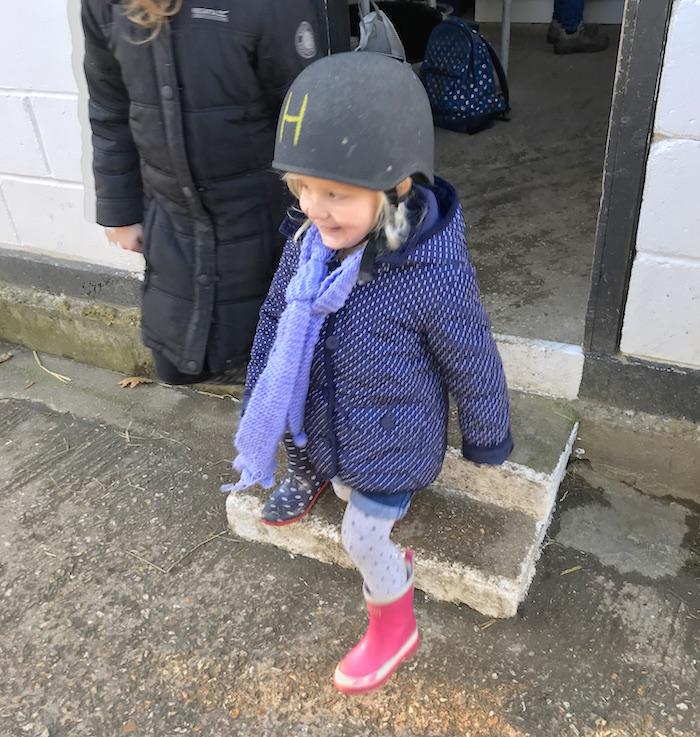 After eating the girls regained some energy and were ready for their riding experience. The girls were given proper riding helmets. OMG, I thought they looked so cute! It was so funny to see little Sienna with one too. 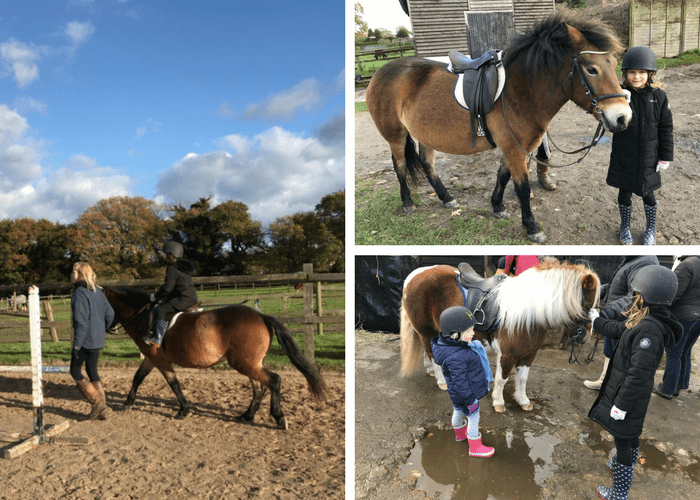 They were then taken to the stables where the ponies were ready for them to start the riding session. They learnt basic riding management, for example, tacking up and putting the bridle and saddle correctly. After that, they had a mini-lesson riding the ponies. 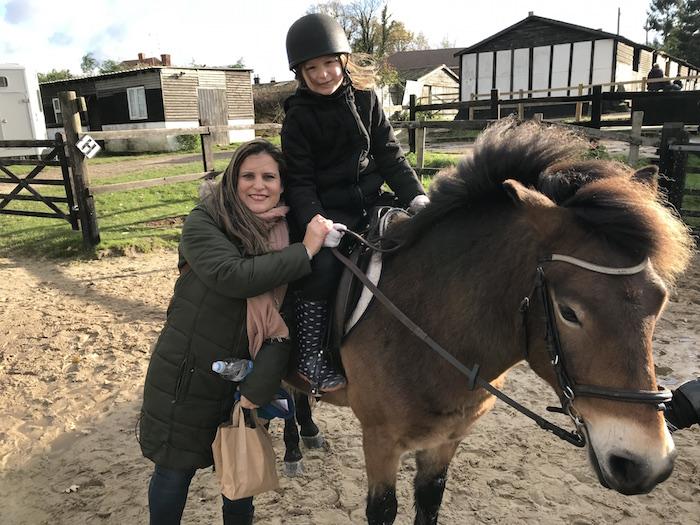 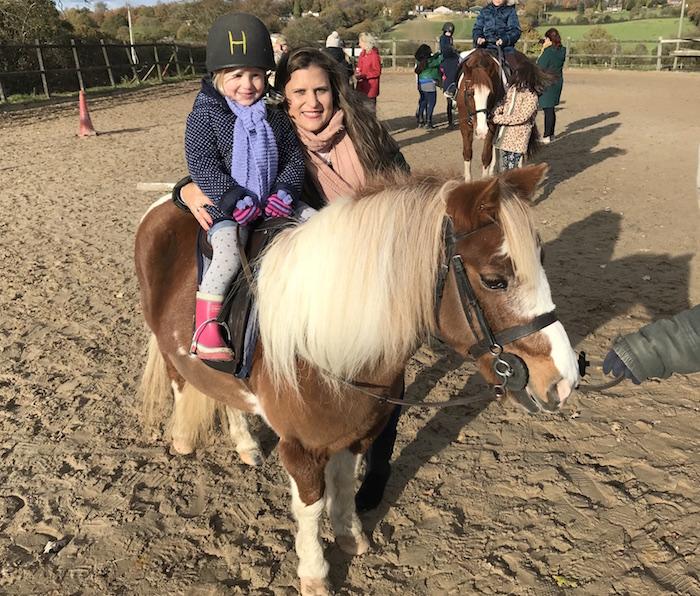 Both my girls absolutely loved riding these ponies and they would love to do it again another time! Bella was riding a smaller horse and Sienna a little pony. Sienna was pretty confident in the end. It is funny because when we arrived she was a little bit scared of being around the ponies but after 10 or 15 minutes, she started to touch them and felt more relaxed. 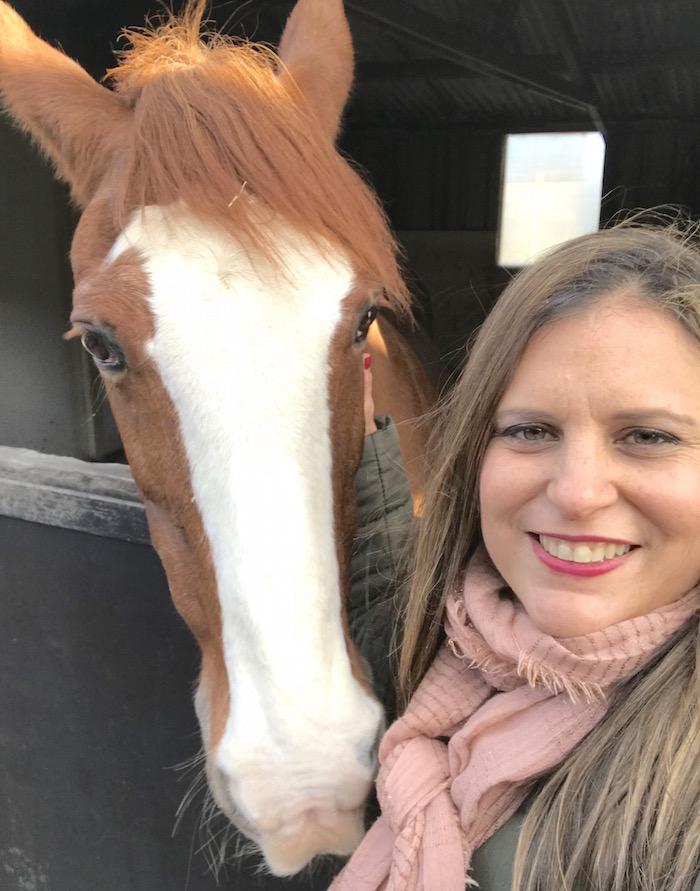 I also had some lovely moments with one of the horses! I really enjoyed having some cuddles with this gorgeous fellow. He was so happy to be touched and was keen for me to be around! It was a really nice moment! 🙂 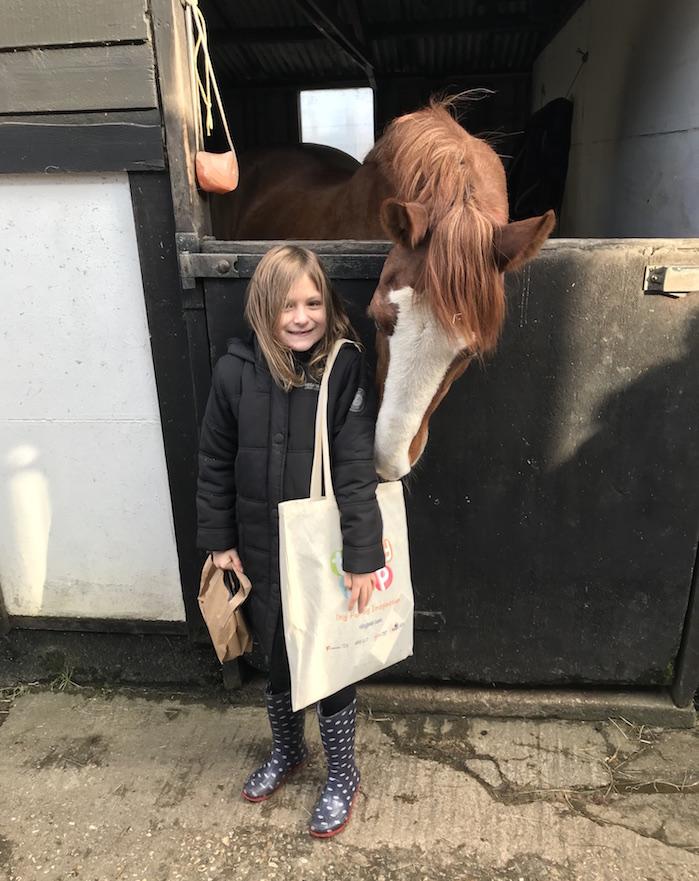 At the end of the riding session, all the kids gathered together to receive a goodie bag. Of course, my girls were there straight away because as you can imagine, they love receiving a goodie bag, LOL! They got some My Little Pony goodies, some candy and a lovely mug with an image of a horse! Such a nice touch!

We all had a great time. My girls loved it and I loved seeing them so happy! Thank you so much Tiny Pop for organising this lovely event! Don’t forget that you can watch My Little Pony at 8 am and 4.30 pm every day on Tiny Pop. It is available on Freeview 207, Sky 167, Virgin 737 and Freesat 605.

Have you taken your kids to a pony riding lesson before? Have you heard of Therapy Ponies? Have your kids watched My Little Pony The Movie yet? What about the TV show on Tiny Pops, do they watch it too? What is their favourite character?

*Disclosure: We were invited to attend this event organised by Tiny Pop and our travel expenses were covered. However, my thoughts and opinions of the day were my own.