From now on I will be posting monthly updates of my baby Sienna. We are missing her first 9 months of life which is sad but you have to start somewhere right?

Sienna is now 10 months old and she has reached many great milestones! I feel that she has grown up so fast in the past month. I’m starting to see how she is changing physically. It is a shock to see how fast she has lived her first year and I find it sometimes hard to know that she will be my last baby, so when I remind myself of that, I realise I should appreciate even more all the positive things. 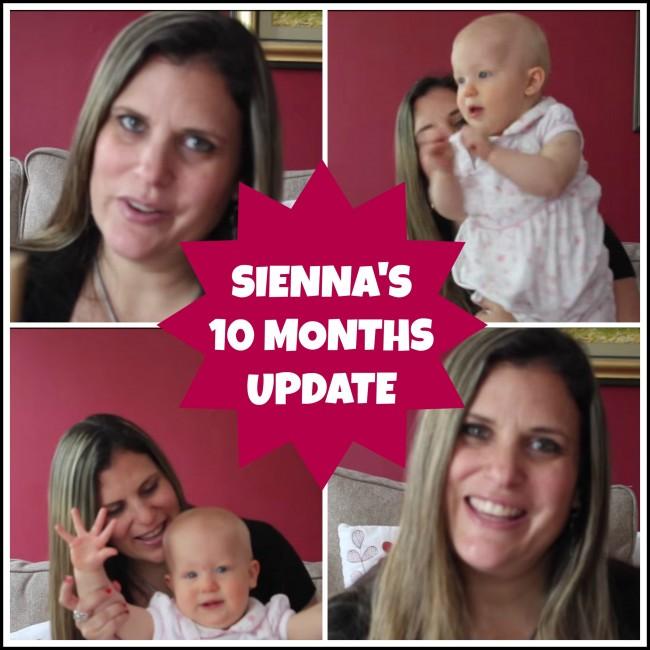 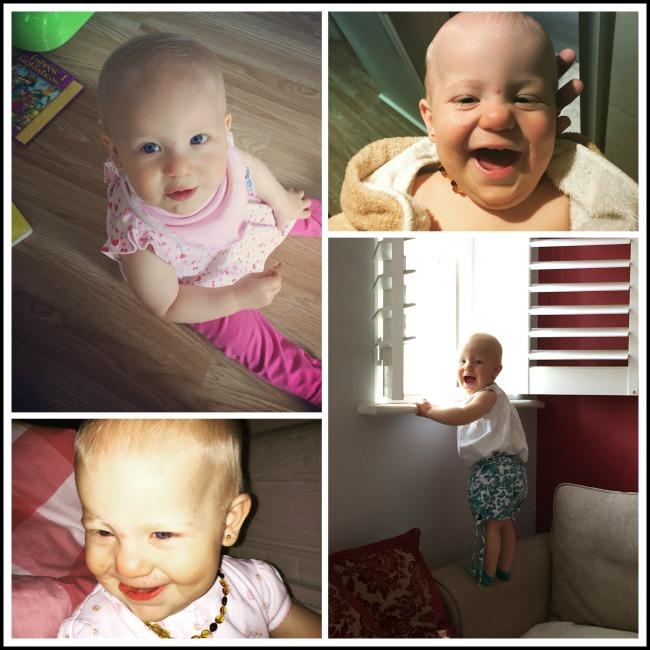 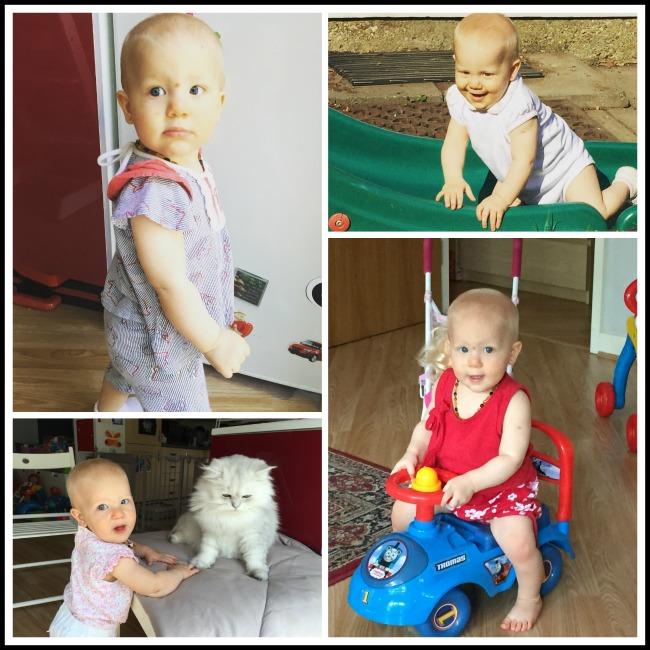 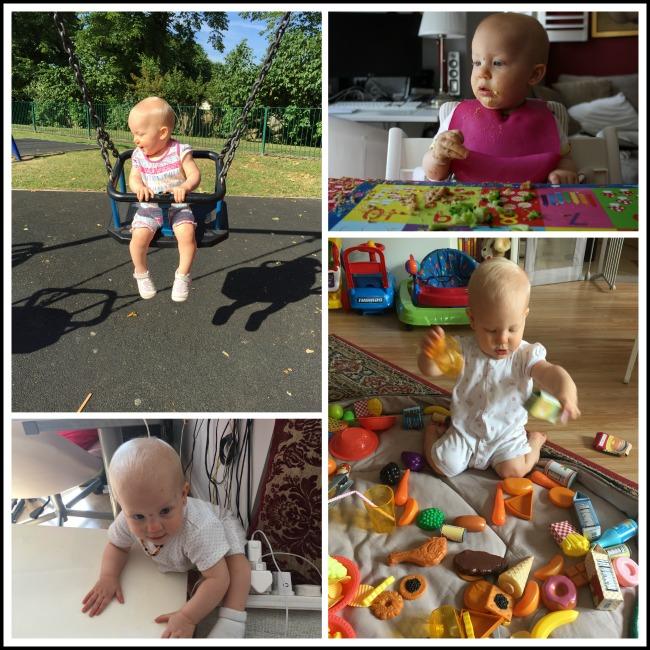 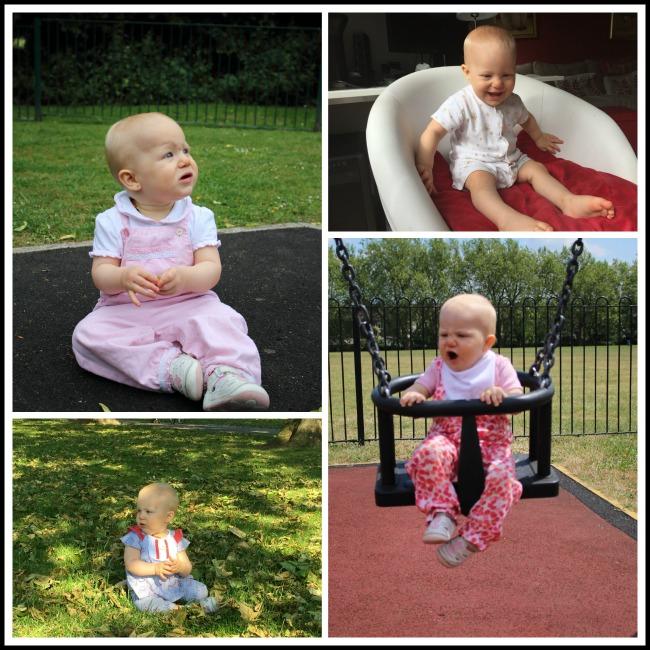 Weight/Height: I haven’t weighted Sienna since she was 8 months so I don’t know how much has she grown. I’m about to book an appointment at the baby clinic soon. I will also ask them to measure her height too as I’m very curious to see how tall she is at the moment. She seems pretty tall. This information will probably be useful for the next month update.

Eating: Sienna is eating very well. She is very greedy, she is always hungry. Completely opposite to her sister. She is now eating much more lumpy food. I’ve started to do a little bit of Baby Led Weaning but I still don’t let her have a bowl of food on her own as I’m terrified of the mess. I can’t cope with that :-(. At the moment, she can eat pieces of banana on her own and anything that is chopped in small portions like carrots, broccoli, potatoes,  bread, etc. She drinks from her sippy cup but with help as every time I leave her on her own she makes a mess (the tommee tippee ones don’t prevent the liquid from coming out too much) and chokes a little bit. For breakfast she always eats porridge and a whole banana which she eats without being chopped, holding it in her hand and taking bites. I thought this was pretty good. For lunch she eats a lumpy pouch from Ella’s kitchen and fruit or rice pudding for dessert. For dinner she has a veggie puree with baby rice and for pudding she always has yoghurt. For snacks she has Organix puffs or any brand that do puffs or some fruit.

Sleeping: Sienna is already sleeping through  the night (for a few months now). She sleeps in her cot in her bedroom. She goes to bed around 8pm and sleeps through until 6 am. I’m not completely happy with this because I would like her to go to bed at 7pm and wake up at 7 but because Daddy arrives at 7pm we had to adjust her schedule. At the moment I’m sleeping in the same bedroom as Sienna because its convenient for all of us. In that way, I can deal with the breastfeeding without disturbing anyone else. Sienna is doing 2 naps during the day. Her naps have been changed recently as she wasn’t sleeping very well during her lunchtime nap (I follow Gina Ford’s book). I decided that I was not going to follow what the book says here and just go with Sienna’s cues. I realised she needed more time for her morning nap so I decided to let her sleep however much she felt to. Since then she has been doing around 1.5 hrs in the morning and around 1.5 hrs in the afternoon. It seems a lot but it is a blessing for me so I can get on with things I need to do. This is my last technique – just letting her guide me with what she wants to do and to be honest it is working wonders so far.

Bathtime: Sienna is now having a bath inside the big bath-tub. She loves it. I was nervous at the beginning because she likes to go near the tabs and play with them but because she has the bath with her sister I feel more relaxed now because Bella is always taking care of her baby sister and so its not a problem any more. Sienna feels so comfortable in the water. She literally can be underneath the shower head and be absolutely fine which is completely different to Bella who even now complains. Sienna is a like a fish in the water, LOL

Sizes: Sienna is wearing clothes for ages 9 to 12 months and 12 to 18 months. The latter ones fit her very well to my surprise! I think she is a big baby. Nappy size: 4

That’s everything for the update about Sienna and as for me I’m feeling pretty good after 10 months since giving birth. I had a programmed c-section so I was prepared and my recuparation was pretty good. I got my period back about 4 months later. The only downside was that after that I got a massive hair loss which was horrendous. I kind of knew it because I had the same with Bella but this time it seemed twice as bad. I thought that I was going to be bald but it stopped after a couple of months. Now after 10 months I feel myself again. The only thing is that I’m still breastfeeding and that still prevents me from being 100 percent free in regards to the food and drinks that I take. This will change in a couple of months because when Sienna turns one I will stop completely.

Please see the video below:

What about you? How did you feel 10 months after giving birth? Did you suffer hair loss like me? How was your baby at 10 months? Did your baby start walking or maybe crawling? Leave me a comment I would love to hear your story too.