This is a very special moment for me as it shows a huge milestone for my little baby Sienna. I have been watching her closely and I realised that she was standing up for a longer time lately which means that her legs are getting stronger and therefore ready to start walking. 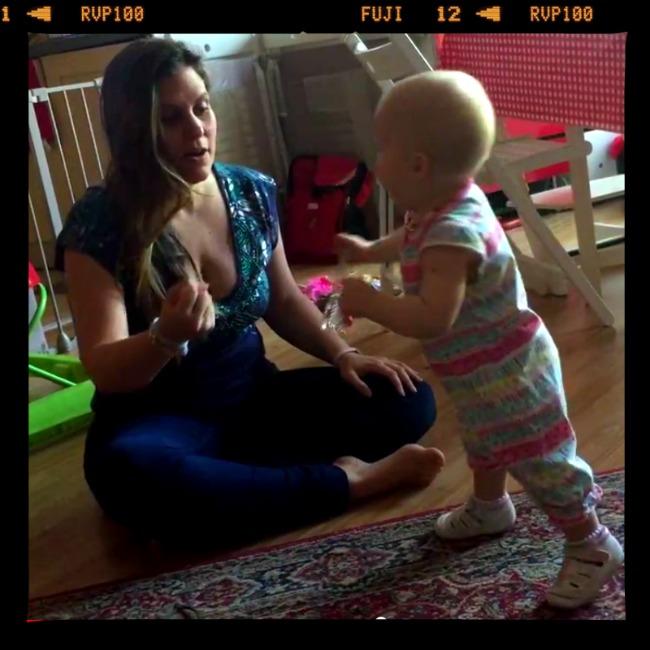 I wasn’t very sure if this was going to happen this weekend but I was sure that it was going to happen very soon. My eldest daughter, Bella had her first steps when she was 10.5 months and I thought that it was pretty early. For that reason, I was more aware that this milestone could happen soon for Sienna as she will be 10 months next week.

Anyway, cutting a long story short, today we were having a family moment at home after being out all afternoon. We were playing in the living room and I gave Sienna my necklace. For some reason, she felt very safe when holding the necklace and was able to stand up for a fair amount of time so I thought that she might start doing something sooner than expected. In this particular moment, I turned towards Nick and I winked at him and he got it straight away and took his iPhone out to start filming her. Shortly after, Sienna took her first steps! Isn’t it wonderful! Not only we were able to enjoy that special moment but we were also lucky enough to film it!

I thought this was so incredibly brilliant that I had to do a screenshot of the video (that is why the photo is a little bit blurry but I will post the video later) and share it with you guys! I can now say that Sienna had her first steps at 9 months! Amazing, right? We are so happy about that. We still can’t believe it.

What about you guys, at which age did your kids take their first steps?