I love going to the West End. Watching plays and musicals is one of the things that I enjoy the most. The musicals I’ve been to recently have been more family oriented for my little ones. But I was really looking forward to going to a musical with Nick. We had that opportunity when we were asked to review the latest musical Everybody’s Talking About Jamie. I didn’t know much about this musical apart from it receiving critical acclaim from both critics and audiences since it opened in November last year. So we were really looking forward to watching it.

Everybody’s Talking About Jamie is currently playing at the Apollo Theatre in Shaftesbury Avenue, in the heart of the West End. It is only minutes away from Piccadilly Circus tube station. I was not feeling my best that night as I was at the start of what resulted in 10 days in bed with 40 of fever suffering from serious sinusitis but despite that, I had this feeling that I had to go and that I wouldn’t regret it and thankfully I did go because it was certainly worth it.

ARRIVING AT THE THEATRE 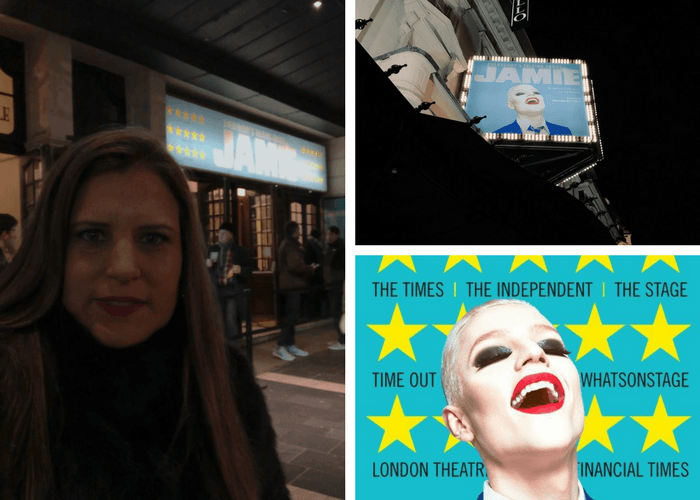 While I was walking from the station I was able to see the theatre and the big, bright sign. I got super excited when I saw it. I knew it was going to be a good night and I completely forgot about not feeling very well. Nick, who met me after work, arrived not long after me and we went it. We were greeted, given a lovely goodie bag and guided to our seats.

INSIDE THE APOLLO THEATRE 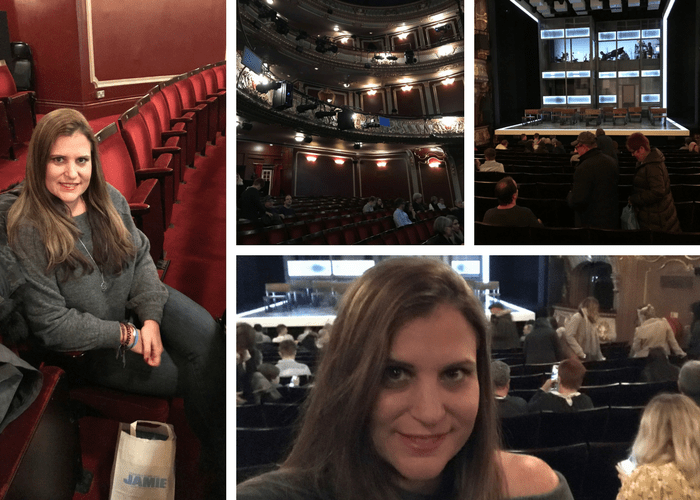 We were given stall seats which was really nice as we were able to see the show very closely. I have not been to the Apollo Theatre before and I really loved it inside. It is lovely and has lots of charm. It is not very big but it was perfect to feel that cosiness. 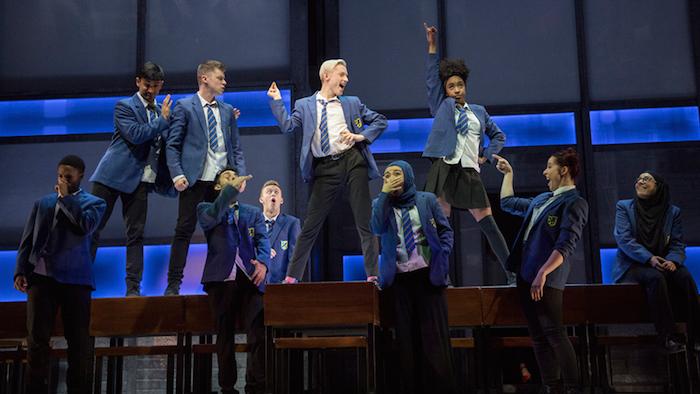 This musical is inspired by a true story. It is about Jamie New, a 16-year-old who lives on a council estate in Sheffield. Jamie doesn’t quite fit in and he is terrified of the future. Supported by his brilliant loving mum and surrounded by his friends, Jamie overcomes prejudice, beats the bullies and steps out of the darkness, into the spotlight.

I was really impressed with this musical. The singing, the dancing, the topic covered were all amazing. It is very touching, especially if you are a mother. I kept thinking what if something similar happens to my daughters. I learnt so much from the character of Jamie’s mum and definitely being a loving mother will always help conquer those difficult moments.

I am not going to lie, I even had some tears during some emotional parts. I really love when a show and its characters transport me into the story so I feel like I am also living those feelings! This is of course due to the amazing and talented cast. 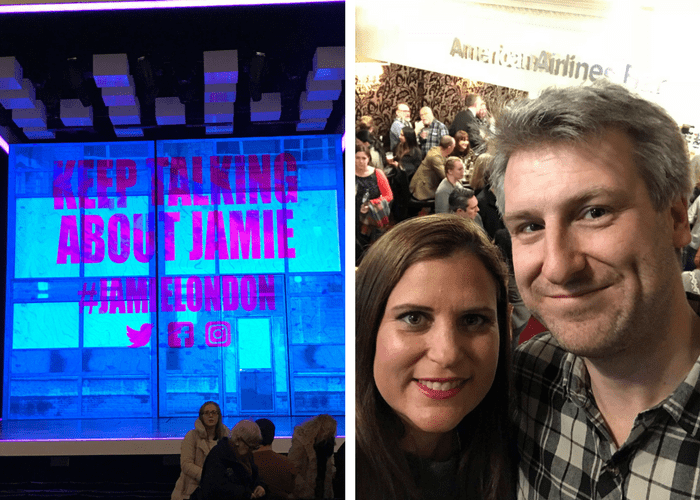 The show lasts 2 hrs and 40 minutes including the interval. During the interval, we went downstairs to the bar. They had an area allocated to the media. We were given some bracelets to get some complimentary drinks, so we went to join the queue.  There were lots of people, so it took some time to be served but we enjoyed our drinks together with some tasty crisps. 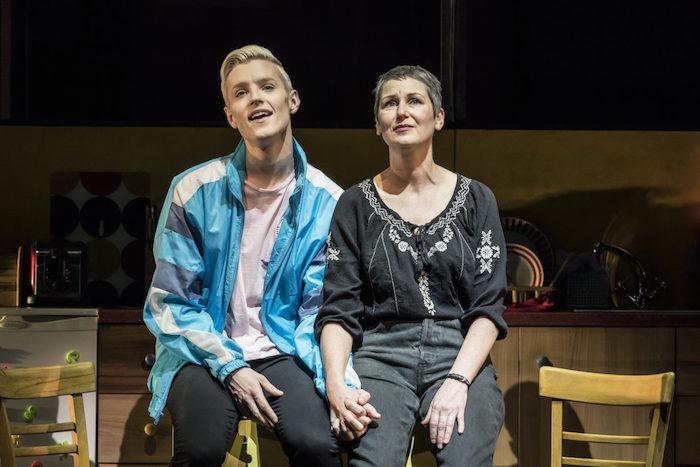 In the second part of the show we got into the most emotional scenes and some great singing to accompany this. It was all magnificent! I don’t want to tell you too many details about it because I don’t want to spoil it for you but I promise you would like it.

MEETING THE REAL JAMIE AND THE CAST 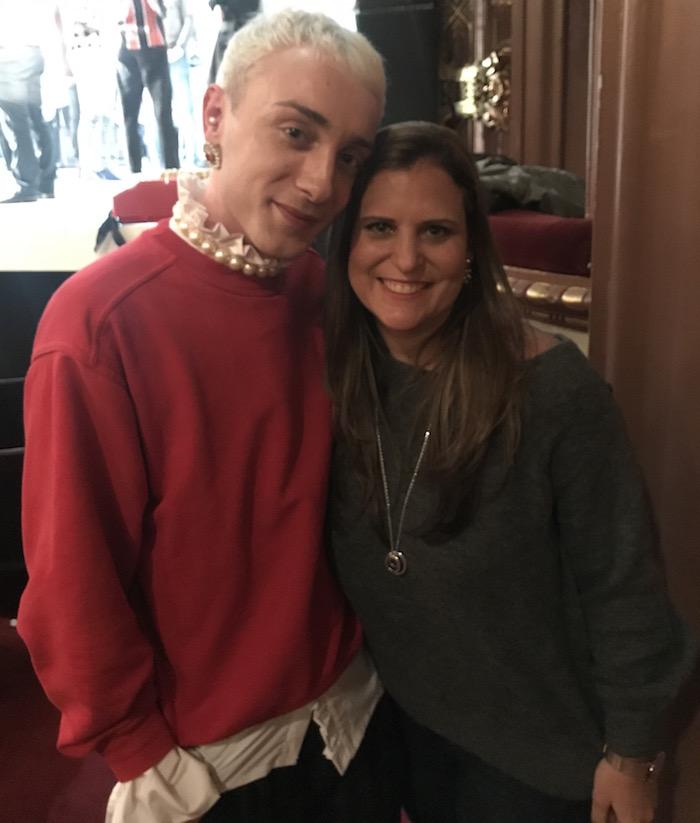 When the show ended, we got to meet the real Jamie, who inspired the story, as well as the cast. These are the moments I really feel so thankful for having such a lovely job that brings me so many amazing opportunities.

There is nothing more appealing than after watching a show, you are able to meet the people behind it. Jamie was there and looked exactly how I imagined him! He told us a little bit about his amazing journey which was fantastic! I was so happy that he was there and best of all I was able to take a photo with him. He was so nice and was happy to have a chat with us about the show and his experience with bullying. It was very inspiring!

After meeting Jamie, we were taken up to the stage to meet the cast. OMG, that was brilliant! I really wanted to speak with John McCrea who plays the main role (Jamie). He is just amazing. He will be the best new superstar. Just wait and see! He did such a great performance that it was an honour to be able to meet him in person. Because of his performance, he has won Best Performance in A Musical, The Jack Tinker Award for Most Promising Newcomer at The Critics Circle Theatre Awards and nominated for Best Actor in a Musical at the Olivier Awards. How fantastic is that? 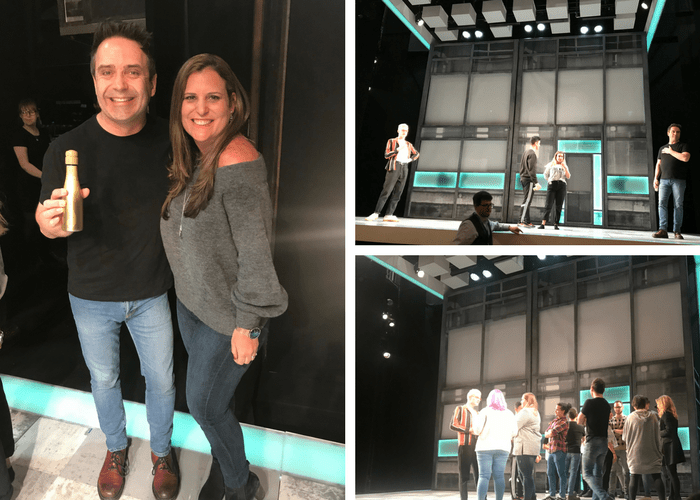 We also met the rest of the cast which was also really nice. I got a photo with Phil Nichol too, who plays the role of Hugo Battersby, a brilliant Drag Queen. I also wanted to take a photo with Lucie Shorthouse who plays the role of Pritti Pasha, Jamie’s best friend but we ran out of time so couldn’t. But it was a fantastic experience and just amazing to be able to meet them all in person and say hi.

INFORMATION ABOUT THE SHOW & AWARDS 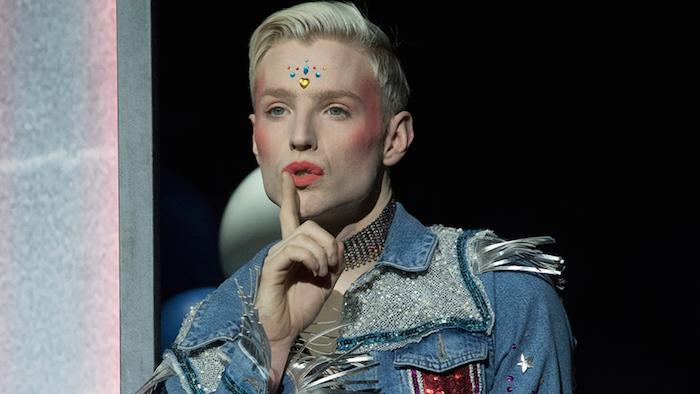 The show performance time is Monday to Saturday at 7:30pm and Wednesday and Saturday at 2:30pm. You can get tickets from £20. Their booking period has been extended to Saturday 6th October. 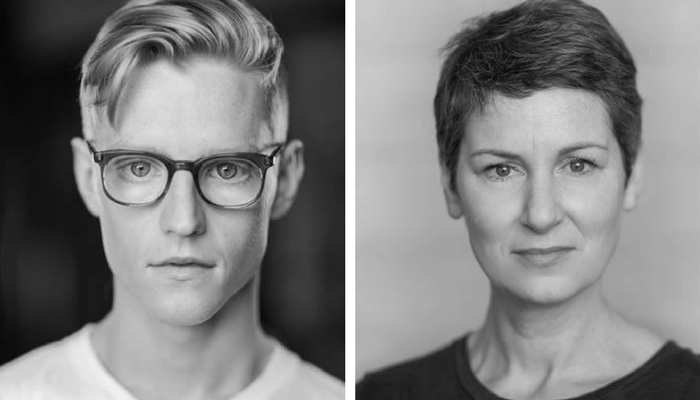 After being nominated for four awards back in December 2017, Everybody’s Talking About Jamie also received three of the awards at The WhatsOnStage Awards: Best Actor in a Musical for John McCrea in the title role, Best Actress in a Musical for Lucie Shorthouse and her portrayal of Jamie’s best friend, Pritti Pasha and Best New Musical.

And recently they have been nominated for 5 Olivier Awards: Best New Musical, Oustanding Achievement in Music, Best Theater Choreographer, Best Actor in a Musical (John McCrea) and Best Actress in a Musical (Josie Walker). So as you can see, this musical is a must see!

Nick and I really enjoyed this musical. I felt it was really emotional to watch and I loved all the dancing and singing. It is a really fun show and I really think you should go and watch it because you would definitely enjoy it as much as I did. I promise you will have a great time.

Do you like going to musicals? What do you think of Everybody’s Talking About Jamie? Do you fancy watching it?

*Disclosure: We were invited to watch Everybody’s Talking About Jamie and then meet the cast and the real Jamie as part of a lovely blogging event for the purpose of this review. However, all thoughts and opinions are my own.