I was super excited to receive another invitation to visit the Warner Bros Studio Tour in London. Nick and I first visited the studios last year for the launch of 4 Privet Drive – the Dursley’s home and I absolutely loved it! When we received another invitation I didn’t think twice and decided to take Bella with me this time. Last year I was upset that I couldn’t bring her so this time she was so happy when I told her that she was going to be going with me! Bless her! 🙂 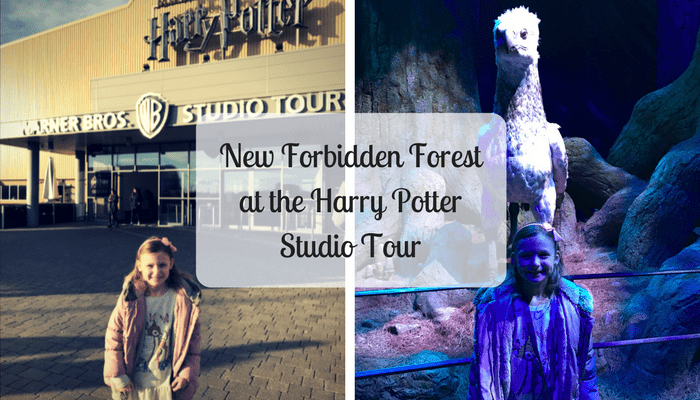 They invited us to attend an exclusive preview of a new expansion: The Forbidden Forest a week before the official launch. How lucky were we? The event was in the middle of the week on a school day so I picked up Bella after school and drove to the studios in Leavesden, near Watford. 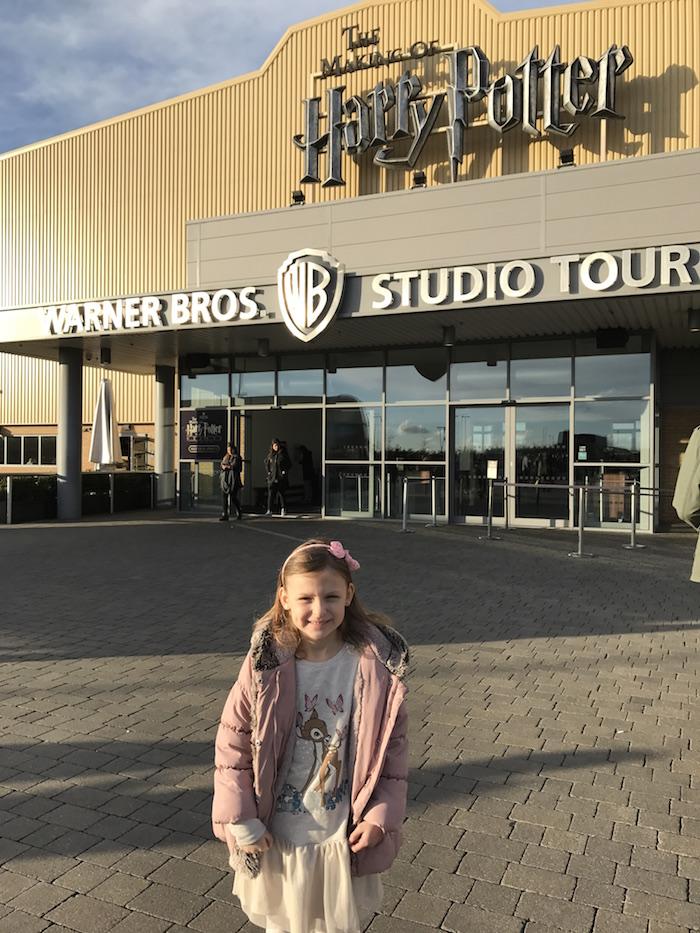 As soon as we arrived Bella saw the big signs outside the venue that say “The Making of Harry Potter – Warner Bros Studio Tour London”. OMG, she was so excited! She couldn’t believe we were there. 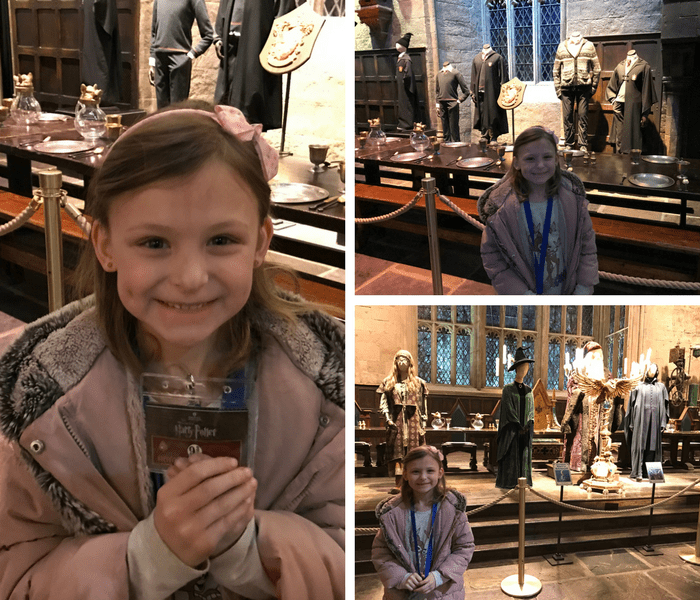 After registering we were asked to go into a small room ready for the start of the tour. We listened to the presentation and then watched a short film. We were then taken to the Great Hall after the big doors were opened. Bella loved it there. She was checking everything with lots of excitement. She liked the mannequins displaying the uniforms too. This Hall is impressive! 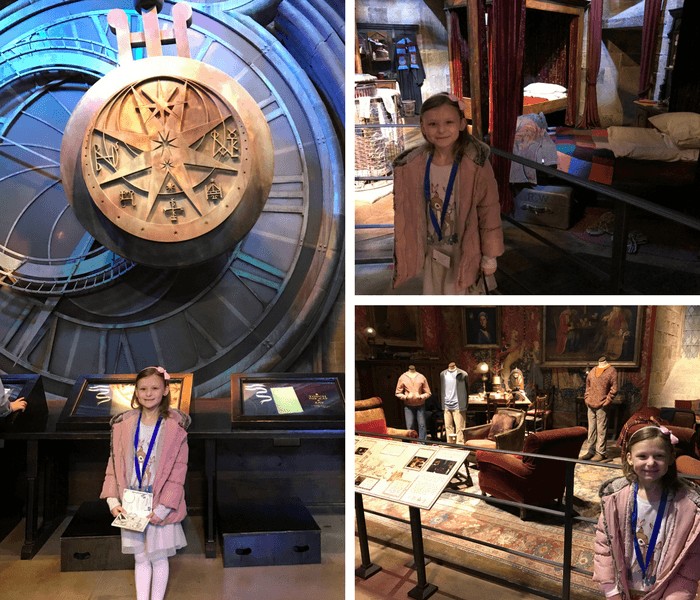 Bella really enjoyed seeing this big room. The things she liked most were the Dormitory, the living room and Hogwart’s Castle Clock Tower. I took photos of her with all of them! 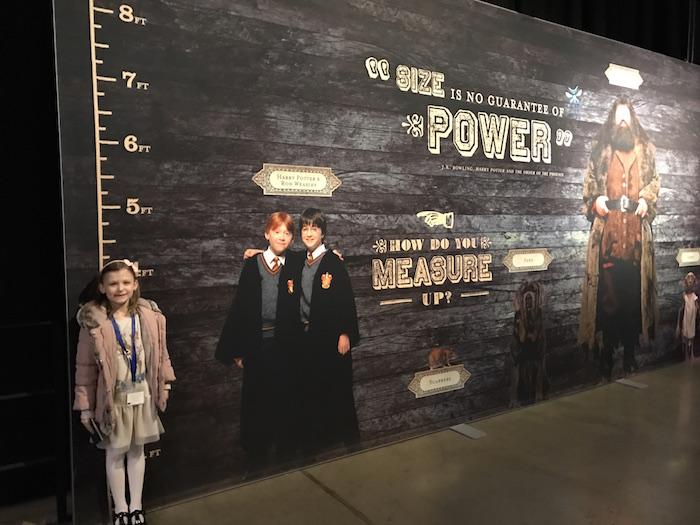 Bella wanted to measure her height. She is about 4ft. Apparently, size is no guarantee of power! We definitely agree with that! I’m short so I hope that’s true, LOL! 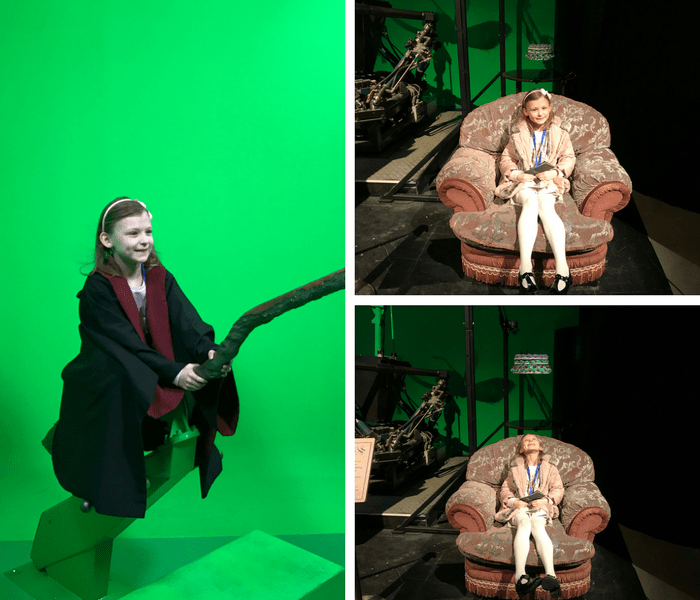 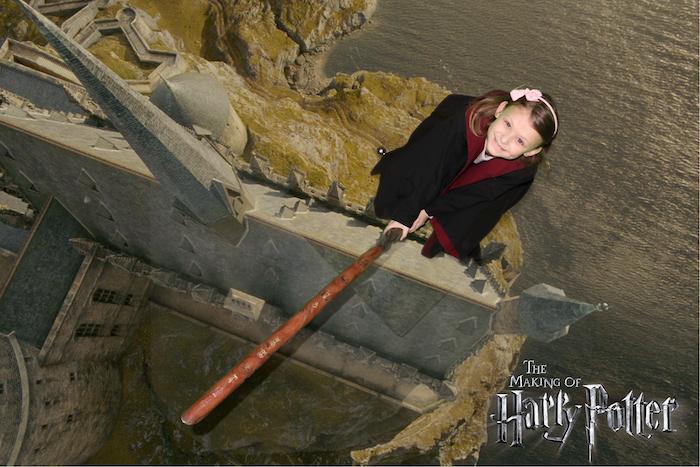 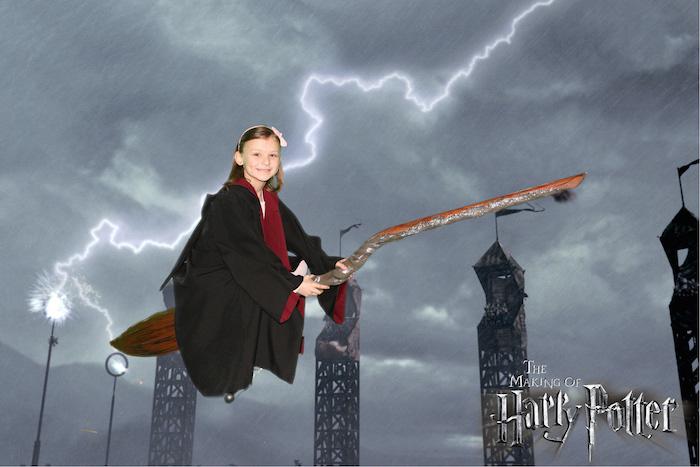 We also went to the green screen room where Bella made a video riding a broom like I did last year. After seeing my video from last year she wanted to have one too. She had so much fun. She wore a Gryffindor robe. She got a couple of photos on her own too. 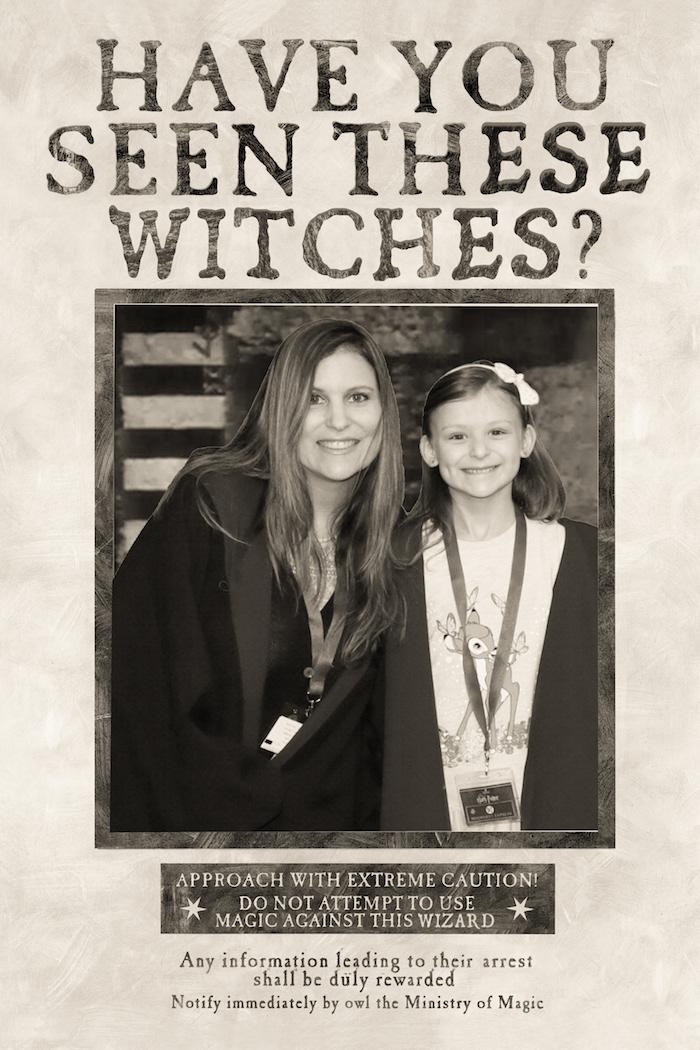 We had this fun photo taken together too, LOL!

Within the Big Room, they had this new, special expansion. We crossed some big velvet curtains and we were able to step into the fantastic Forbidden Forest. It was magical! 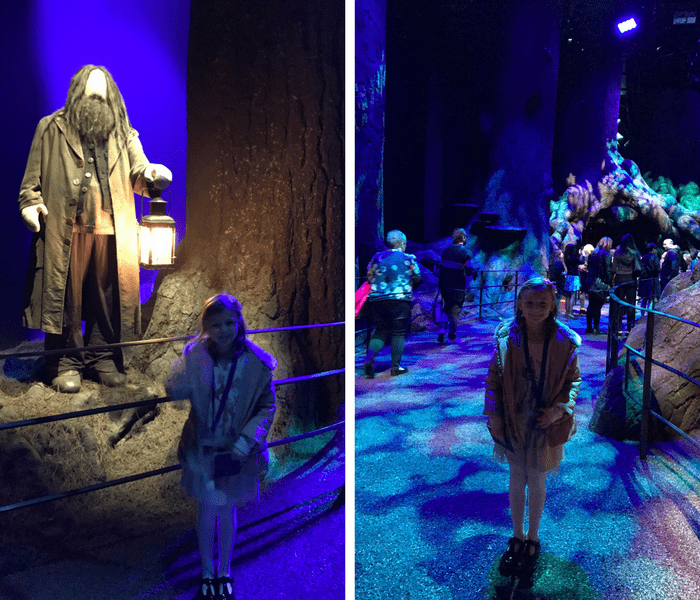 We were welcomed by half-giant Hagrid who was wearing one of his original costumes and was carrying a lantern in hand. The Forbidden Forest offers shelter and protection to Hippogriffs and Acromantula among many others creatures. It is filled with 19 trees each with a diameter of over 12 feet! Fantastic right? 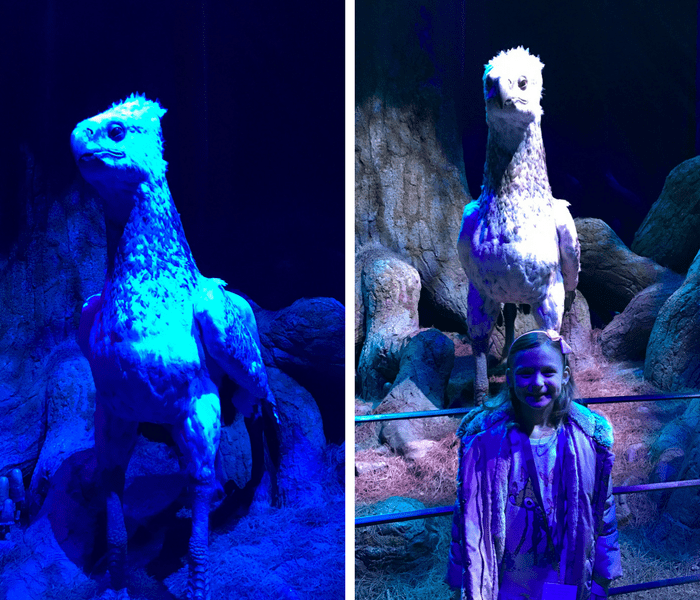 Amongst the imposing trees, you will encounter a full-size model of Buckbeak, which is new to the tour, and we had the opportunity to bow to the majestic creature. We were able to see up close the incredible detail and craftsmanship that went into creating the magnificent Hippogriff. Each feather had to be individually inserted and glued by the Creature Effects team who were busy adding feathers right up until the final moment Buckbeak was needed on set for Harry Potter and the Prisoner of Azkaban. 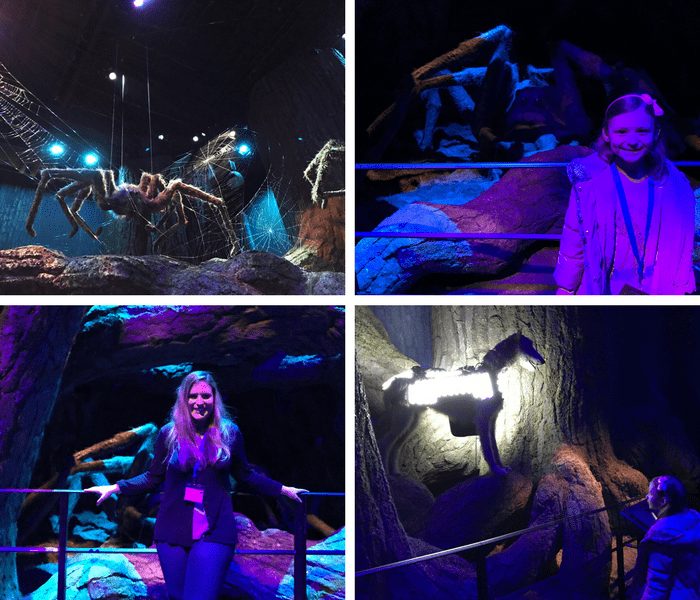 As we ventured deeper into the depths of the forest, we came face-to-face with Aragog, the Acromantula. Emerging from his dark lair, the enormous spider appeared before us along with spiderlings from his family. It was all amazing to watch! Aragog had a leg span of over 18 feet and was even able to crawl out of a hole and deliver dialogue in Harry Potter and the Chamber of Secrets.

We had the opportunity to take control of the weather and discover the techniques used to create a realistic forest within a film (conjuring up wind, thunder and lightning). We also had the chance to cast a Patronus using the same techniques filmmakers employed in the original film series.

The Forbidden Forest is full of mysterious, fascinating and sometimes threatening forces. It is a must see for all and a great addition to the tour. 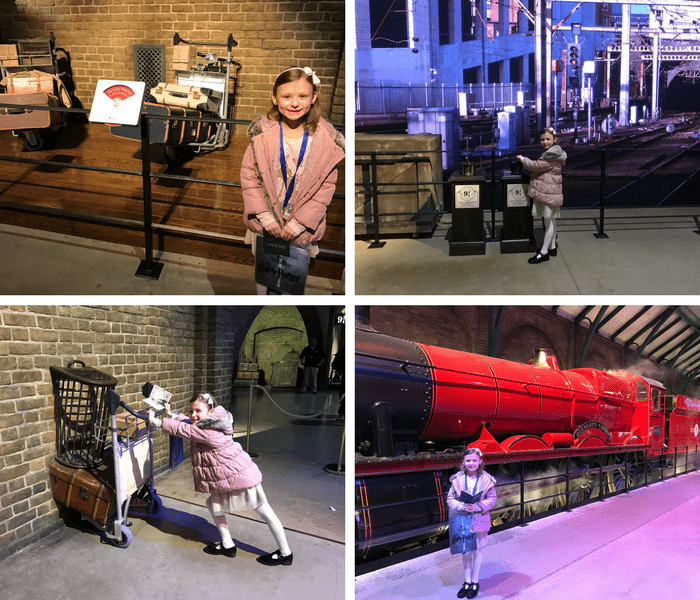 Next we went onto Platform 9¾ to see the Hogwarts Express. Bella loved this room. She wanted pictures everywhere. I was so happy to see her so excited! It was possible to walk through the train and see all the carriages that were set up like they were shown in the movies. Bella had a picture with the famous trolley containing Harry’s luggage. This reminded me of when I had my photo taken doing this last year. 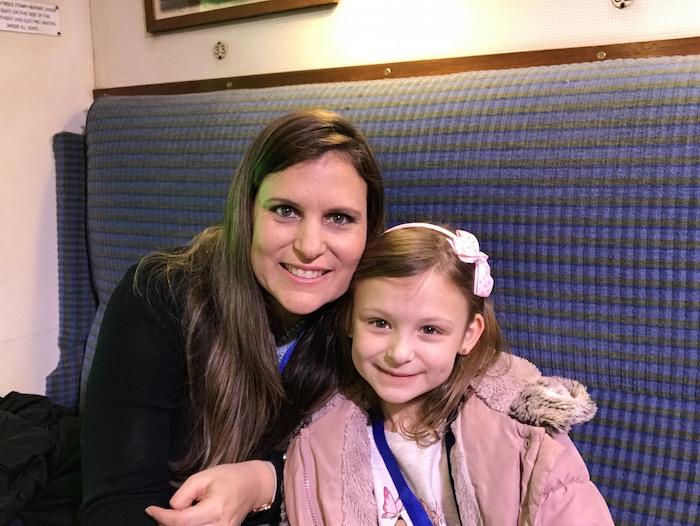 Before we went outside to see 4 Privet Drive, we stopped at the cafe where we had some dinner. Bella had macaroni and cheese and I had a big roll with sausage and onions. It was yummy! We also had the super delicious Butterbeer Ice cream for dessert. We loved it! 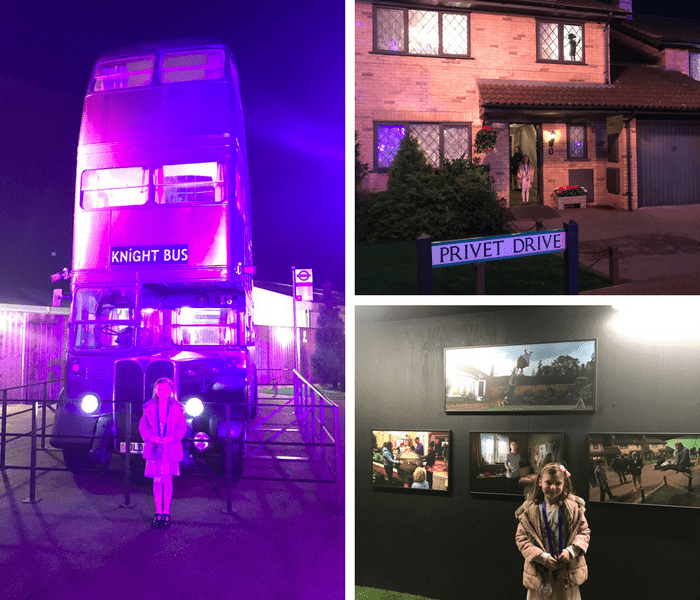 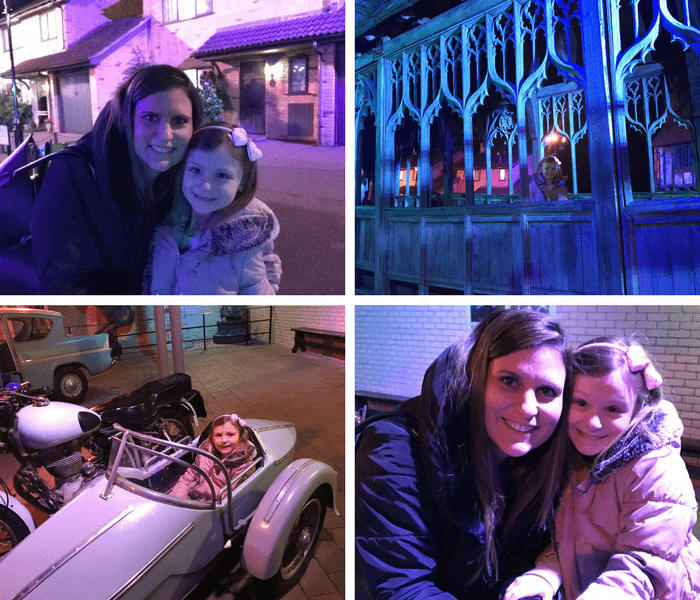 Bella had photos with the huge knight bus, The Dursley’s family home and the Hogwarts Bridge. 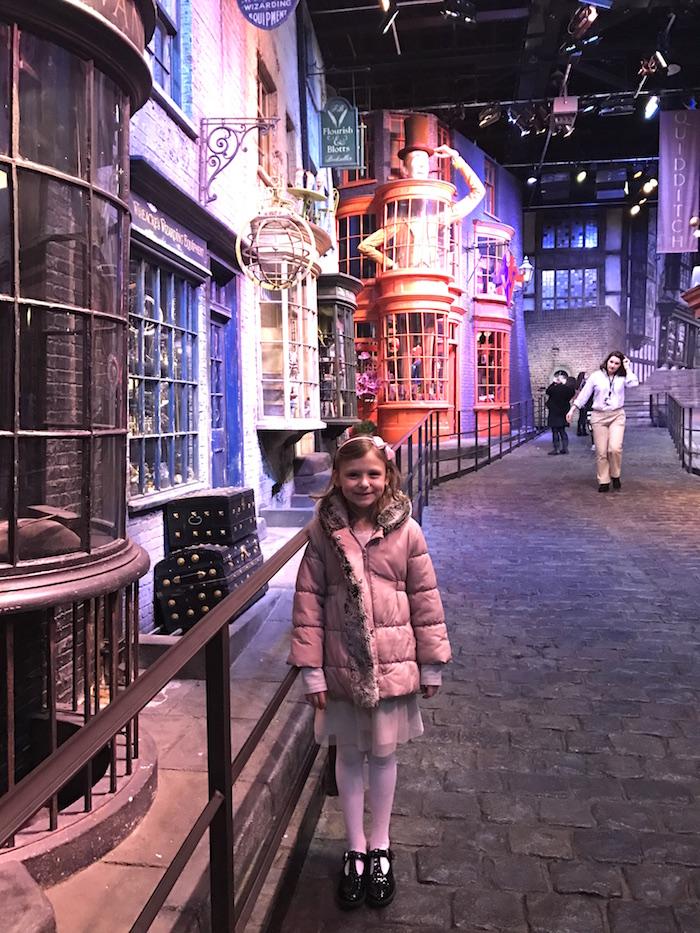 We then went to Diagon Alley. As I expected, Bella absolute loved it here. It looks so real. There were lots of shops with fantastic windows! 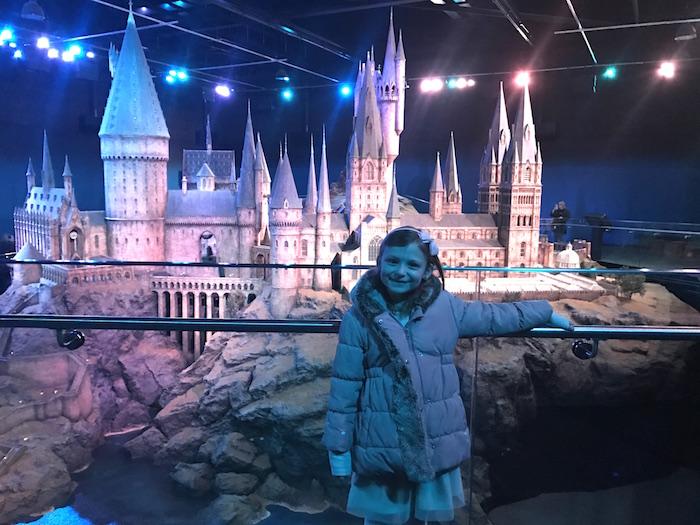 In the last room of the tour, Bella had a photo in front of the massive castle model. She thought it was very impressive! 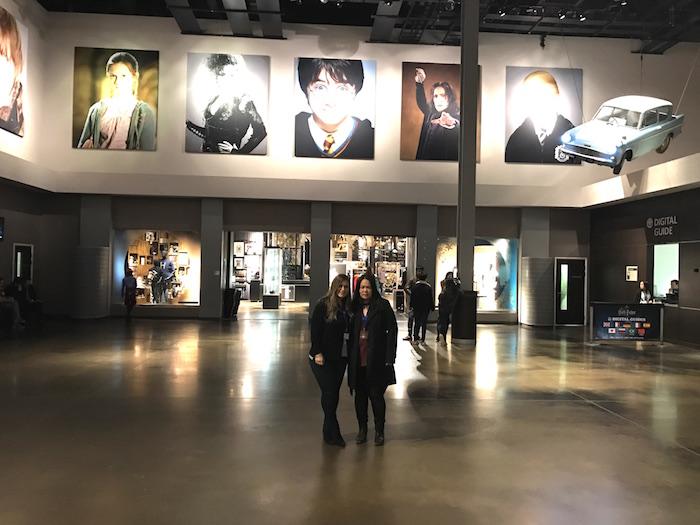 I managed to see my friend Maria from Suburban Mum who was with her sister. We did part of the tour together. It was nice to catch up a little bit more! 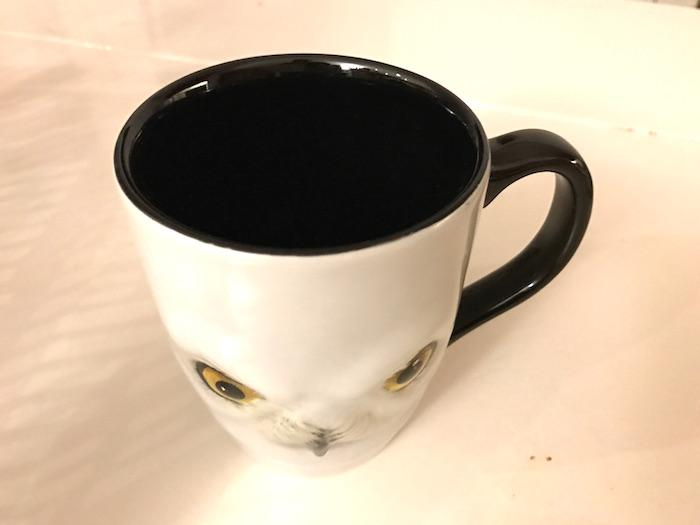 Before I left I bought a few things from the shop for the girls. And one huge Hedwig Owl mug to share with Nick! I really liked it since the moment I saw it, so I just had to buy it! 😉

That was our adventure at the WB Studio Tour. Bella loved it and I enjoyed watching her little face light up every time she discovered a new room. The official opening of this new expansion was on 31st March so it’s now open to the general public. If you get the chance you should try to visit as it’s amazing! Entrance to the Forbidden Forest is included in the ticket price so there’s nothing extra to pay.

To purchase tickets please visit the Studio Tour website. The standard ticket prices are adults £39, children (5-15) £31 and Family (2+2 or 1+3) £126. Tickets for a specific date and time slot must be pre-booked by visiting their website or by calling the Studio Tour’s Visitor Services Team on 0345 084 0900. Please note that you can’t buy them on the door.

Thank you to the Warner Bros. Studios for this amazing experience that I got to have with my daughter. I said last time that I wanted to take her and we did it this time, so happy times! Yee!

Have you been to the Warner Bros Studio Tour before? Do you plan to go? What do you think of the new Forbidden Forest?