I know I have been talking about the MAD (Mums and Dads) Blog Awards Gala for ages and it has taken me a little bit of time to get my post done. As most of you know, as finalists in the “Best Use of Video” category, we were looking forward to this Gala for months – since May in fact! The Gala was held at the Royal Garden Hotel in Kensington, London. It’s a 5-star hotel so we were very excited to go there. The Gala was on Friday 16th September which also happened to be Nick’s 40th birthday! We were very lucky that Nick was able to come, so we could celebrate his 4oth in style! 😉

It is not every day that we get to go to a Gala and also it is not very common for us to have a date night so we decided to stay overnight at a nearby hotel, the Copthorne Tara Hotel in Kensington. We knew other bloggers were staying there so we decided to stay there too. It was my main birthday present for Nick! He absolutely loved the idea! 🙂 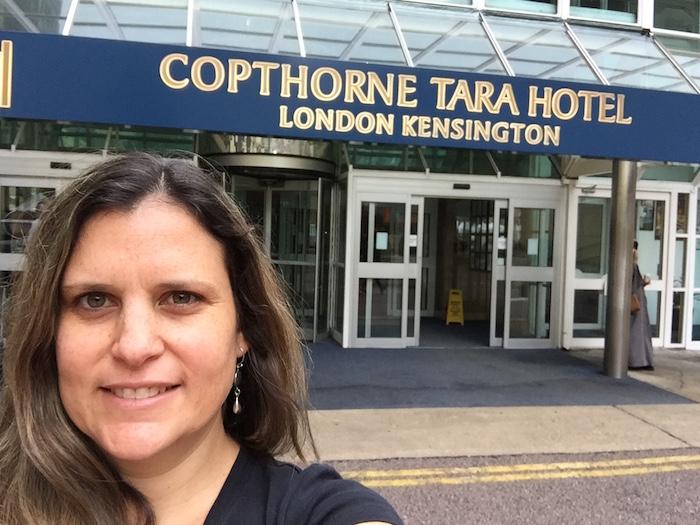 I left our girls at home with Nick’s parents before setting off on my way to this fantastic night. I went to the hotel ahead of Nick who was going to meet me there a little later after he finished work. The organisers of the event were so kind to give to all the bloggers attending, complimentary hair styling and makeup. I booked my appointment in advance so I arrived around 4pm which was when my first appointment was booked for. 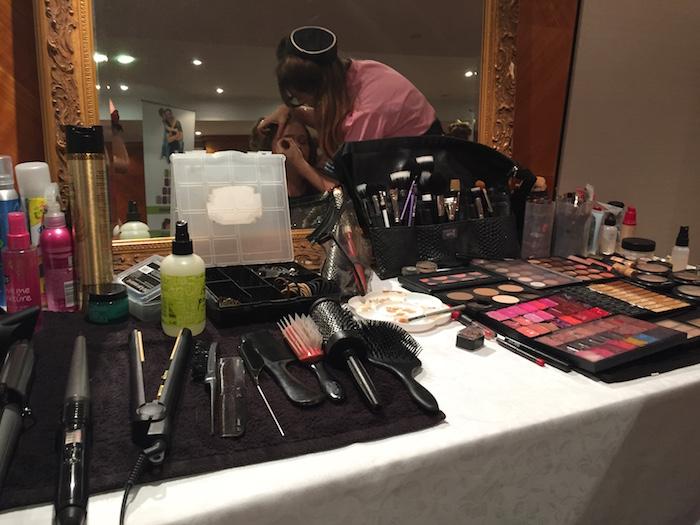 The hair and makeup were being done in the basement where I was directed upon arrival. It was great to be greeted with a choice of either prosecco or a soft drink whilst we waited – a really nice touch by the organisers. We were going to be pampered by the Powderpuff girls. I had my makeup done first followed by my hair. 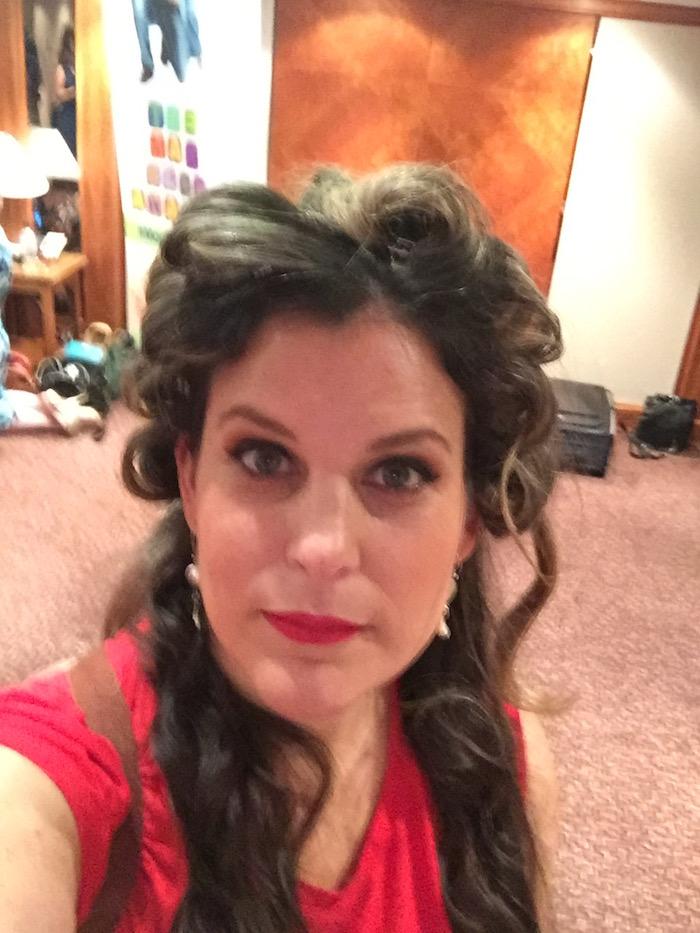 It was also nice to meet some of the other bloggers at this stage and to also see how we were all being transformed. I was very impressed with my makeup and my hair. I felt AMAZING. It’s a shame that after having it done I then had to walk back to the other hotel where we were staying to get changed. I felt that my hair was getting wild by the winds as I walked back! As soon as I arrived at my room I managed to get it all back to how it was, phew! 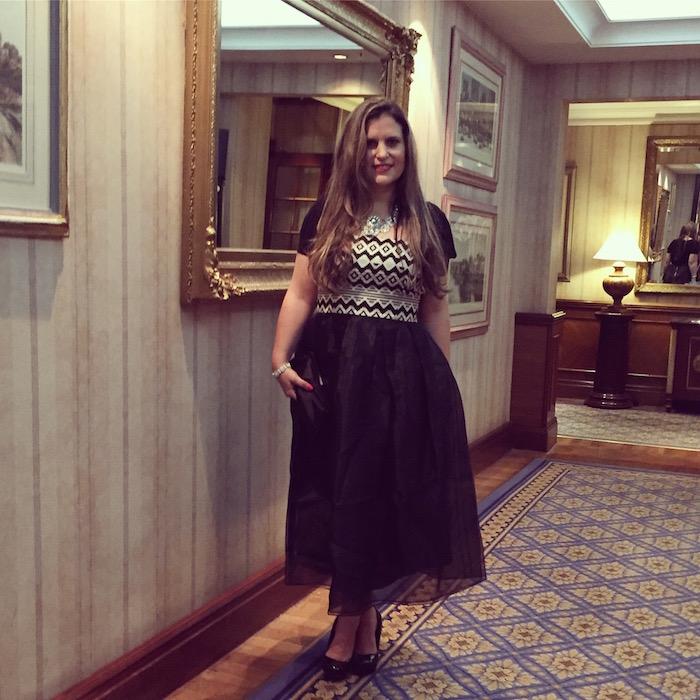 I was incredibly lucky to have the opportunity to wear an amazing Ted Baker dress that was perfect for this Gala thanks to the lovely people at Love the Sales. This website is fantastic. You can get lots of products from luxury brands for a fraction of the normal price. I was asked to browse their website and choose something that I like. 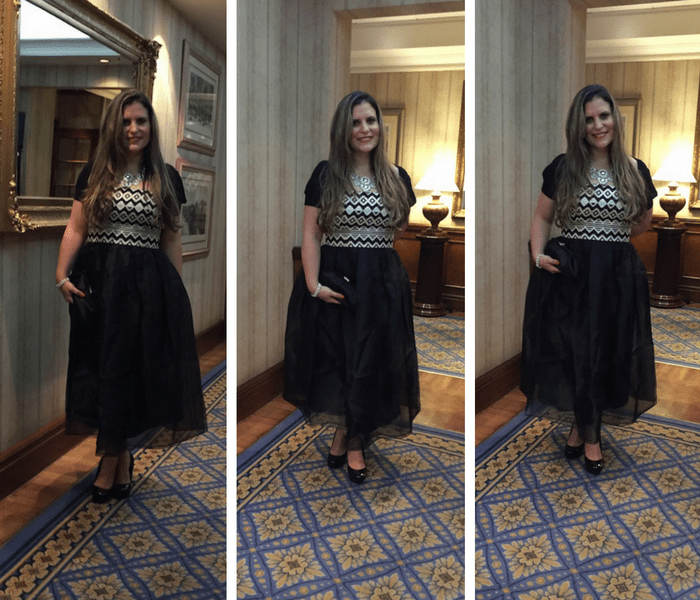 I’m a Ted Baker fan, so when I saw that they had a section just for them, I went straight there and started looking for a nice dress. To be honest with you, at first, I wasn’t sure if I was going to find something suitable for this Gala as I know how expensive Ted Baker’s dresses can be. I was completely surprised when I found this dress, though. It was an amazing sale offer reduced from £298.99 (so almost £300) to £44.99 (so about £254.00 on discount)! How amazing is that?

I couldn’t believe my luck! It was a dream come true to be able to wear such a beautiful dress for that amount. If you are looking for quality brands of clothes to wear I can highly recommend you to browse Love The Sales website. Like me, you will be surprised at the luxury brands available to buy at affordable prices. It’s a win-win scenario! Yay! 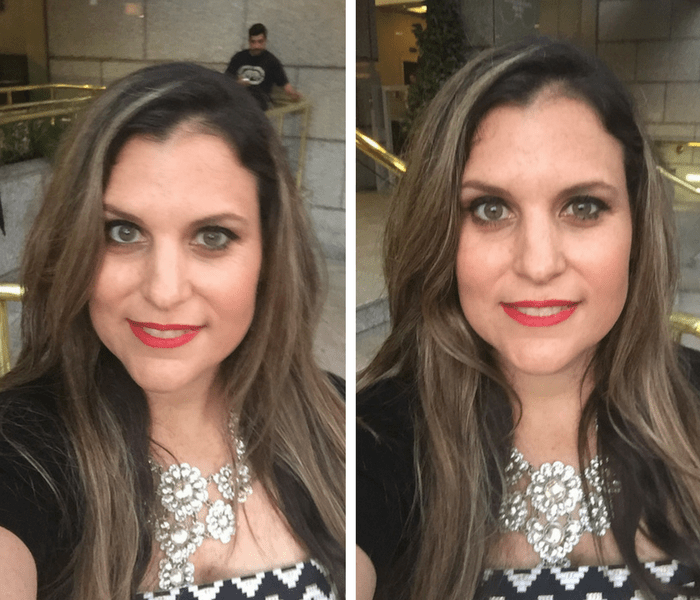 Anyway, back to the awards. After changing into to my beautiful dress, I felt like I was a princess and my prince was there waiting for me to take me to the castle, LOL! Well, back to reality, my prince (let’s say the hubby) decided to call a taxi to take us back to the Royal Garden Hotel as otherwise, we were going to be late, so that was a good move for him! 😉 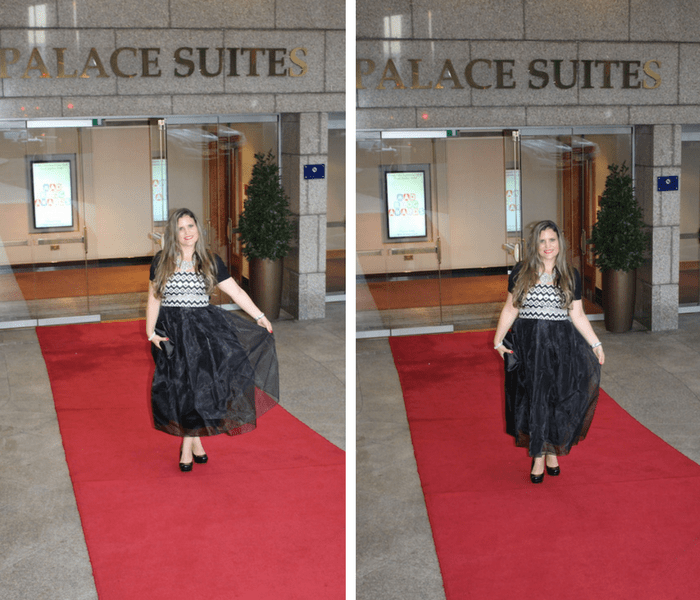 When we arrived and saw the red carpet I decided to take more photos of my dress! It was such a beautiful dress that I wanted to make the most of it! We were greeted with a glass of champagne and some canapes. They also gave us a $100 note to play blackjack and roulette, which was also part of the entertainment for the evening. The funny part was that I was so distracted with everything I didn’t even notice the tables at the back for us to play. I’m so silly for missing all of that! 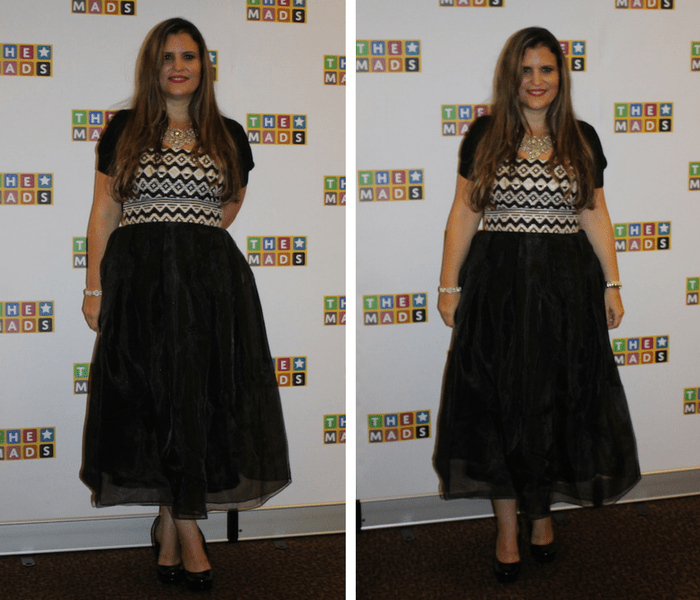 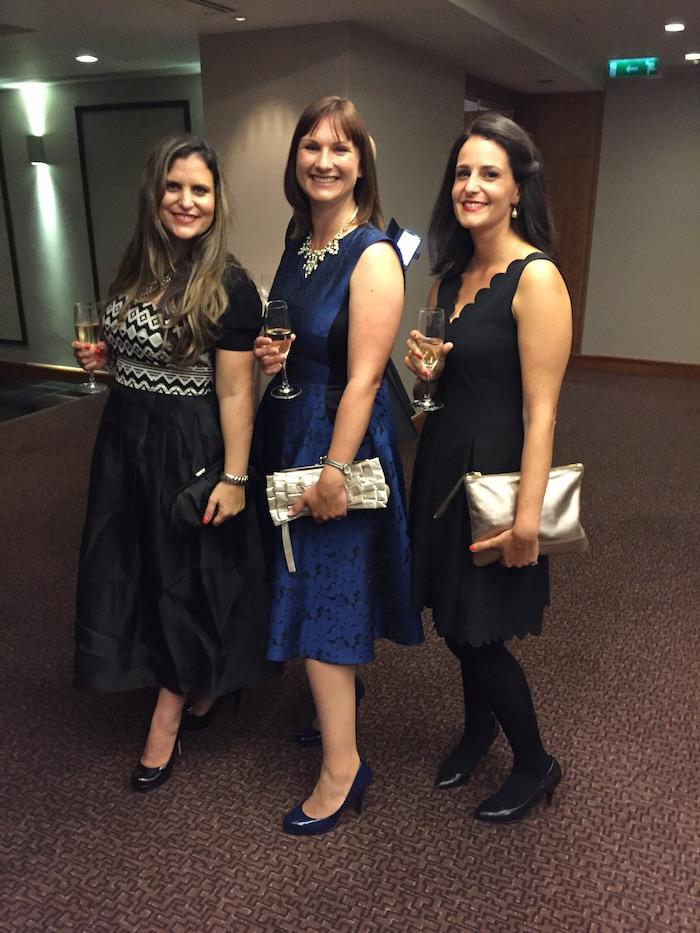 (With Claire from Tin Box Traveller)

In the meantime, I was having so much fun mingling and saying hello to a lot of the bloggers that I have met previously or that I have chatted to online but not met in person before! This is the part that I love the most about blogger events. I love spending some time with other bloggers as we understand each other very well. 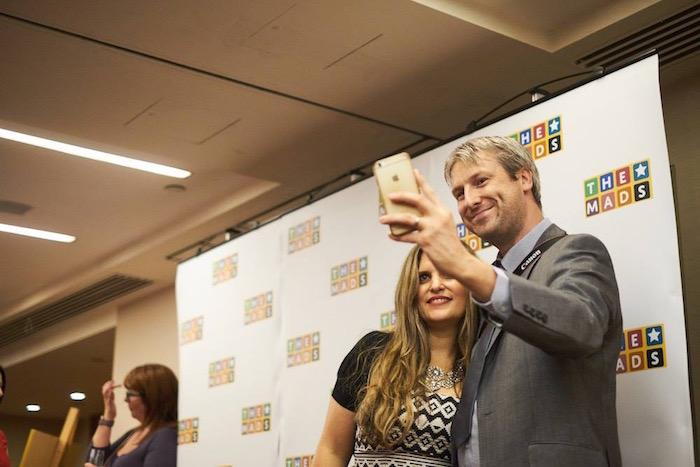 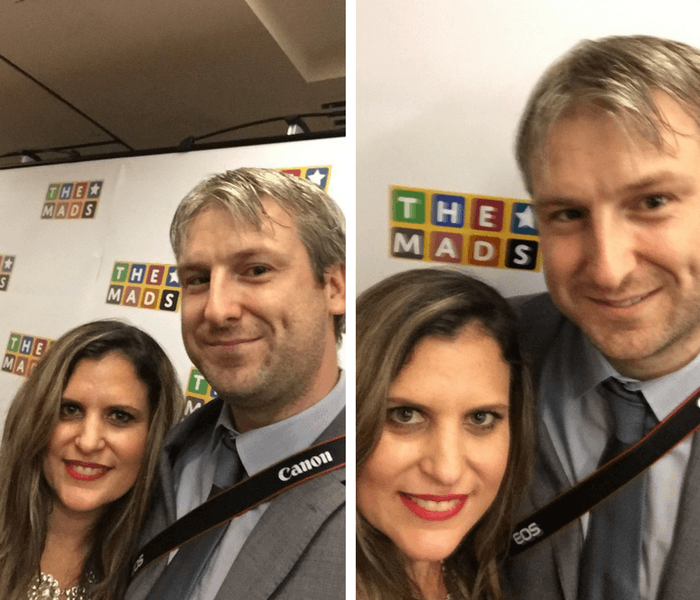 It is funny because you would expect Nick to feel uncomfortable or a bit lost, but he knows quite a lot about the blogging world, LOL! It was hilarious when people were introducing themselves to him and he knew exactly who they were! He is not just my husband, he is indeed my partner in this adventure as the blog is our family project, so I was delighted to have him with me and also to celebrate his 40th there. It was so nice how people were saying happy birthday to him. They were all so nice and welcoming – I felt so happy for him. 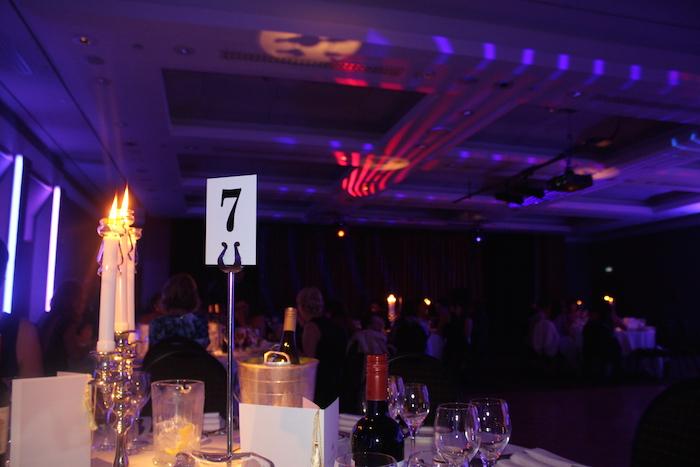 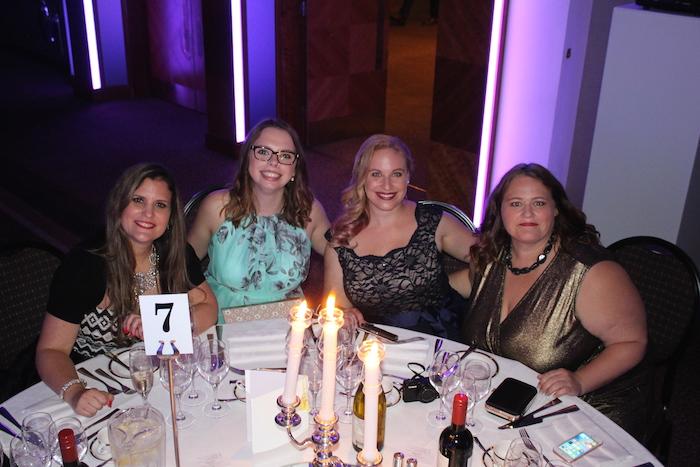 (With Clare, Jenny and Vicki) 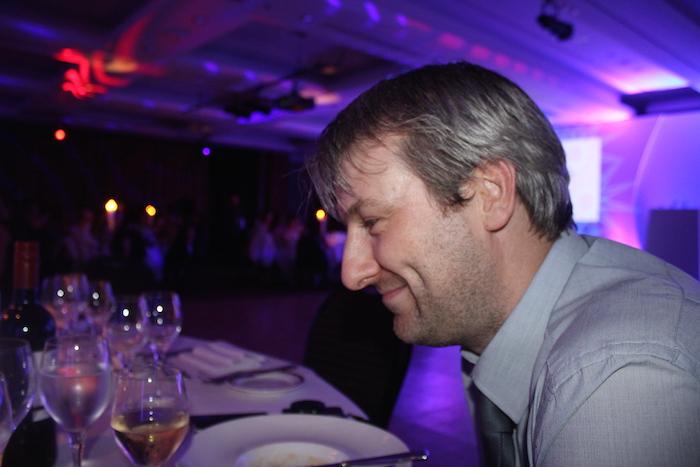 We then were asked to move to the awards room where the ceremony was going to take place. It was all really nicely decorated. The tables were lovely and with the lights down it felt very cosy. We were also offered more drinks! Yay! We were allocated to table 7 along with Jenny from Midwife And Life, Vicki from Being Tilly’s Mummy, Clare from Mumsy Midwife and Niki from Play and Learn Everyday. 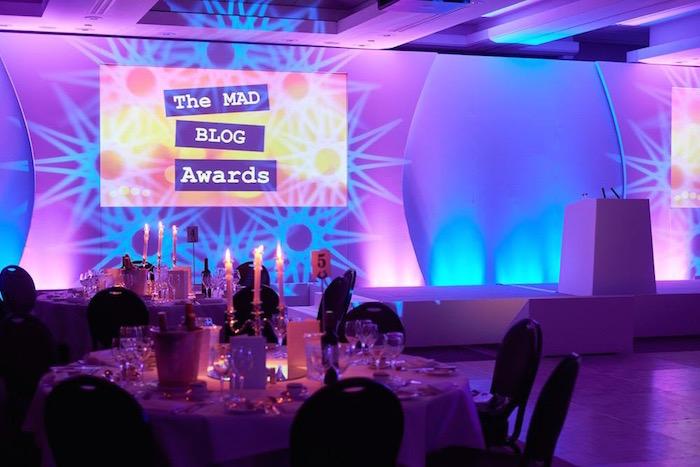 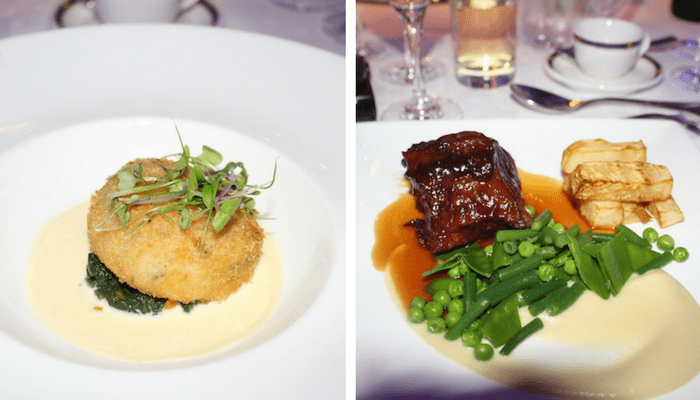 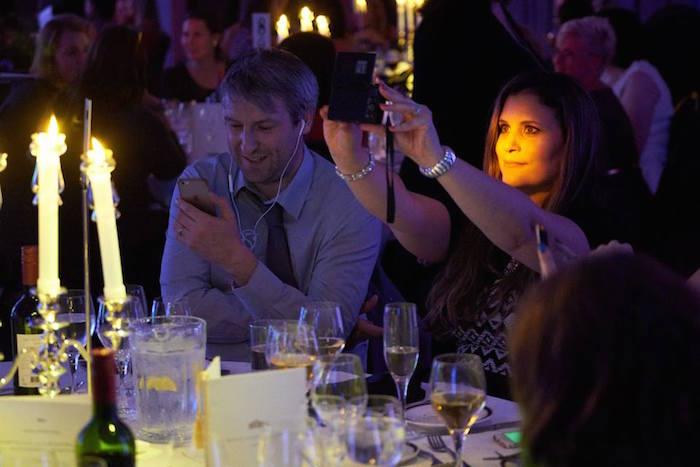 There were 2 screens where they were showing people’s tweets with the #madblogawards hashtag. Nick decided to tweet saying that we needed more bread on table 7 and they actually brought us more bread, LOL! This was very funny. We enjoyed a delicious 3-course meal during which we made a short video call to the house to find out how the girls were. We were relieved to know that they were fine and very happy. After this, we decided that it was time to enjoy the night even more so we got more drinks to keep celebrating the night! 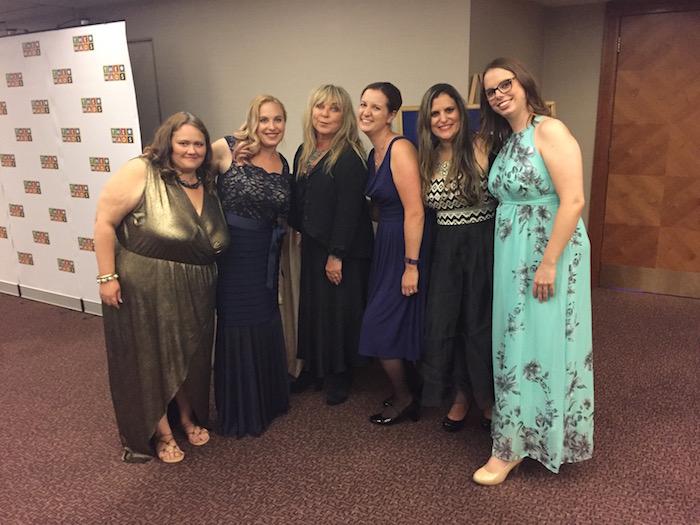 Before the actual award presentations started we had a nice photo with Helen Lederer who was the host for the evening. After this, I started to feel incredibly nervous. I really don’t know why as I was not even remotely expecting to win but I think just the idea of being a finalist and having your blog called when mentioning the finalist in my category was an amazing feeling on its own.

(Sally welcoming all of us)

I felt it took ages for my category to be announced – it was one of the last ones. But, then it finally was the time and I was very nervous but at the same time, I just wanted it to be done so I could continue enjoying the night. As I genuinely expected, the lovely Emma from Brummy Mummy of 2 won the category. It was a well-deserved win as she is amazing. I was very happy for her! She is doing amazingly well and she is an inspiration to me. She also won the Blog of the Year, so it was a fantastic night for her! 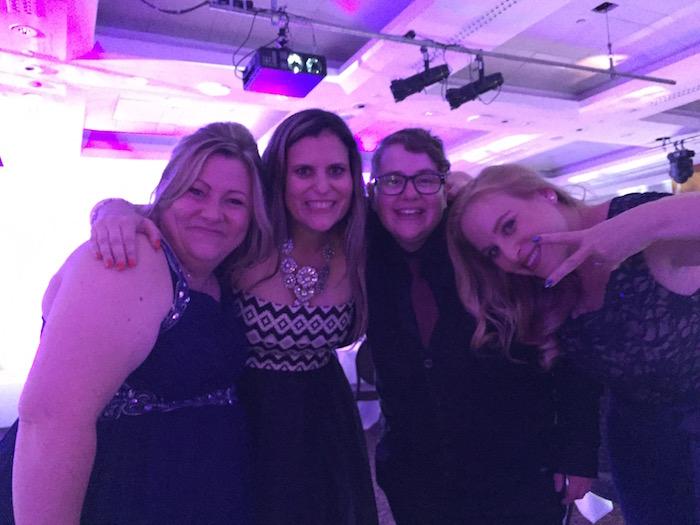 (With Jaime from The Oliver’s Madhouse, Kirsty from My Two Mums and Jenny)

We then decided to go and buy some drinks as we wanted to dance a little bit and have lots of fun. I ended up dancing with a few bloggers on the dance floor. Not everybody wanted to dance but it was so much fun. I love dancing so I was there for sure and ended up staying until about midnight I think. We were one of the last ones to leave so we can say that we really enjoyed every single minute of it!

I didn’t realise I had about 2 more gin and tonics before the end of the night on top of the several glasses of champagne and prosecco I’d had.  I don’t normally drink so I must admit that I felt the pain the next morning! It was not nice. I’m definitely getting old now, LOL, but I had such an amazing time that it was all worth it. Nick had a fabulous 40th birthday and we got to have a night out without the girls so it was really a special night for us! 🙂

I would like to say a huge THANK YOU to Sally from Tots100 and the MADs team for doing such a fantastic job. It was a night that I will never forget!