Sienna is already 12 months old now! Yes, the whole year has passed so quick! I can’t believe it! It feels like yesterday when I met her for the first time at the hospital! This post will be a joint update of Sienna at 11 and 12 months old. 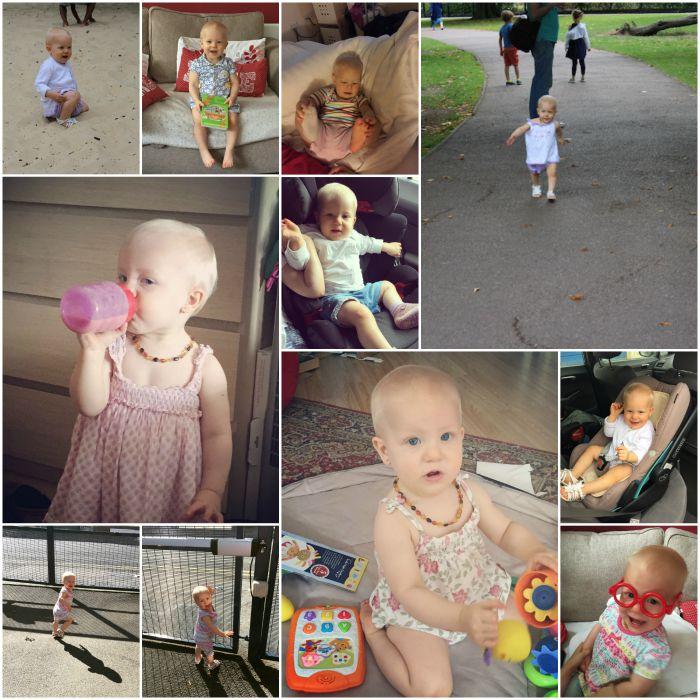 I will quickly cover what has happened since her last update. The most important update was that Sienna was WALKING, not just one, two or three steps but properly walking. She went everywhere unassisted. This was so incredible to watch! She kind of just went for it the previous month and after a week of that she just pretty much runs. It is crazy to see how they learn these things so quickly. Hurray for Sienna! 😉

Weight/Height: Sienna had a GP appointment where the nurse weighed her. She was 8.94 kg. I thought she was going to be more as she eats a lot but no, I was surprised that she was still within the 53rd percentile. Basically, pretty much average for her age. I was meant to ask them about her height but at the end I forgot! I was annoyed that I missed the opportunity 🙁

Eating: Sienna was still eating very well at 11 months. Her meals were much more solid than previously. She began to eat food which was much closer to a proper childs meal which is pretty good. I must say that because she enjoys her food a lot she is very good with trying new things and she is always ready for the next stage and goes through it pretty well. I’m very impressed, especially because Bella has never been that great with her food, even now. I always had to push her to eat while with Sienna I have to stop her from eating more than her proper portions. Her breakfast was still the same porridge and one whole banana. For lunch she was still having Ella’s kitchen pouches from 10 months old up to 12 months. She had dessert after, like fruit puree, yogurt or rice pudding. For dinner she also had a pouch meal but something not heavy, like pasta for example and for pudding she had a yogurt. For snacks she had Organix puffs or any brand that do puffs, fruit like banana, apple, grapes or pears chopped in squares, breadsticks, bread or crackers.

Sleeping: Sienna was still sleeping fine during the nights. Her times were the same, going to bed around 8 pm and waking around 6 am. Of course these times were not always the same but this was generally the times she slept. There were a few mornings that she decided to wake up around 5:30 am which was a nightmare! But what can we do, this was part of being a parent. Sienna’s naps changed a lot during her 11 months. She started sleeping more time during her morning nap (about 2 hrs or even more) so I had to stop the second nap so she only had one very long nap but at an early time. Normally around 11 am until more than 1 pm. After that there was no way I was going to put her for another nap later as she would’ve ruined her bed time routine. The problem with that was she was knackered by the end of the day and I had to rush things more. This was a short phase mostly during this month.

Breastfeeding: Sienna dropped her lunchtime breastmilk for good. It kind of happened gradually. She just didn’t need it anymore. She was drinking less and less by the day until one day I decided to  give her a snack with a drink and she had that happily and completely forgot her breastmilk. I took that as a cue that she was ready to drop this feed. The remaining feeds in the morning (just after she woke up) and the one at bedtime were still in place at 11 months.

Bathtime: Sienna loved her bath. She was always happy and looking forward to it. She had the bath with her sister and they both had fun. She loved the water and she was still happy to put her head under the shower head.

Sizes: Sienna was still wearing clothes for ages 9 to 12 months and 12 to 18 months during this month. Nappy size: 4 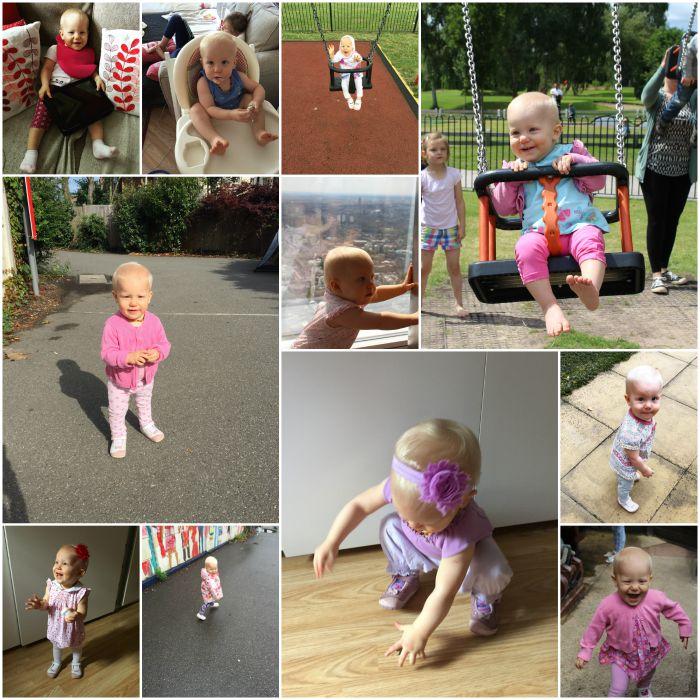 HAPPY BIRTHDAY SIENNA!!!! Sienna is now 1 year old and the time passed too quick!  I didn’t even realise it! She is not a baby anymore and she is quickly becoming a toddler! Crazy!

Weight/Height: No update regarding her weight and height.

Eating: Sienna is now eating everything. She really loves eating which is a pleasure to watch. With her I have to be watching that she doesn’t eat more than what she is supposed to otherwise she could be eating all day long LOL. She can eat any type of finger food with her fingers. If I give her chicken cubes with some broccolli and carrots she will eat them happily on her own. However certain foods that are messier I’m still helping her to eat. She doesn’t use the spoon for eating yet. We have tried with yoghurt and she manages a few spoons but then she gets tired and passes it to me to help her. I guess this part will take time and practice. Bella learned this at nursery so now with Sienna its different as she is at home all the time with me so I will have to teach her this part. I hope I manage to teach her properly. Her breakfast has changed this month. She has sometimes toast with unsalted butter and yoghurt. She still has banana and porridge every day because she loves these. She sometimes has some strawberries too. For lunch she is eating HIPP Organic food which is for 1 to 3 year olds, which she likes a lot. I have swapped them from Ella’s Kitchen as we found some of them to be too spicy for Sienna. For dessert she has HIPP pots or jars of desserts. At dinner she eats a sandwich with unsalted butter and cheese. She likes this a lot! For her birthday she tried pizza for the first time and she is now sharing a small margarita (kids version) with Bella some evenings. She also likes to have smashed potatoes with chicken, or soups. For dessert she normally has yoghurt. For snacks she still loves to have puffs, fruit like pears, bananas, small chunks of apples, grapes. She also likes raisins, crackers, wholemeal bread, breadsticks, etc. She had today for the first time a homemade smoothie made of bananas, strawberries, oranges and apples with a dash of milk. She loved it! She drunk it all. Another food that she has tried this month and because it was her birthday was of course her birthday cake (a sponge one)! She has tried a little bit of ice cream too.

Sleeping: Sienna is still sleeping from 8 pm to 6 am. She has days that she wakes up earlier than this but 6 am is her normal time. The day before Sienna turned 1 year old we decided to put Sienna and Bella together in the same room which means that mummy and daddy are back sleeping together again!! Yipee!!! It is amazing all the sacrifices that we as parents have to do for our kids. To be honest with you, I was so happy to be sleeping back in my own bed – I really missed it. I was very nervous to do that change but at the end it was worth it. Regarding her naps, she is back to 2 naps per day. I must admit that I’m struggling with her naps at the moment as I’m not sure what is best for her at this stage. She is now doing her first nap super early around 9:45 am and this is because she gets tired in the car when we come back from dropping Bella off at her summer camp. She is so sleepy that I can’t wake her up any more so I ended up putting her to bed. I let her sleep whatever the time she wants so I can do my things. Ninety percent of the time she sleeps for 1 hr and 30 minutes but there are days that she does up to 2 hrs and when this happens the day gets complicated because I don’t want to put her for another nap later to avoid having trouble with her bedtime. When she does 1 hr and 30 minutes I put her again later so she does at least another hour.

Breastfeeding: Sienna was starting to wean off from the breast. It hasn’t happened all the time so it is not 100% yet but I guess I’m giving it more time because last week she kind of went back to her usual routine of having breastmilk at bedtime and I was surprised. It was strange because she was already having whole milk from a sippy cup and that was great progress for her because she never wanted milk in a sippy cup before. The past few days however she has been breastfeeding longer and happily so now I’m a little bit confused. The truth is that she uses me as a pacifier so this is the part that I guess will take longer to change. At the moment I’m just following her cues on this too as I think every change should happen naturally. She will stop breastfeeding when she is ready. The good news is that now I know that she likes whole milk and she doesn’t have a problem to use a sippy cup. Hurray!! 😉

Sizes: Sienna’s size is still the same as last month. She still uses some 9 to 12 months  clothes but I think this will be her last month using those. The next sizes 12 to 18 months is now what she will be wearing for a little while. Nappy size: as from yesterday she is now using size 4+ of nappies. She likes Pampers.

This is all I can remember for these 2 months. I won’t do these monthly updates anymore as I don’t think there will be too many changes until she is 18 months so my next update will be then. I hope you like these updates. If you have missed her 10 months update you can see it here.

What have been the most interesting milestones for your babies at 11 or 12 months? Did they walk early or much later? Leave a comment with your story too as I would love to read about other people’s kids developments too.